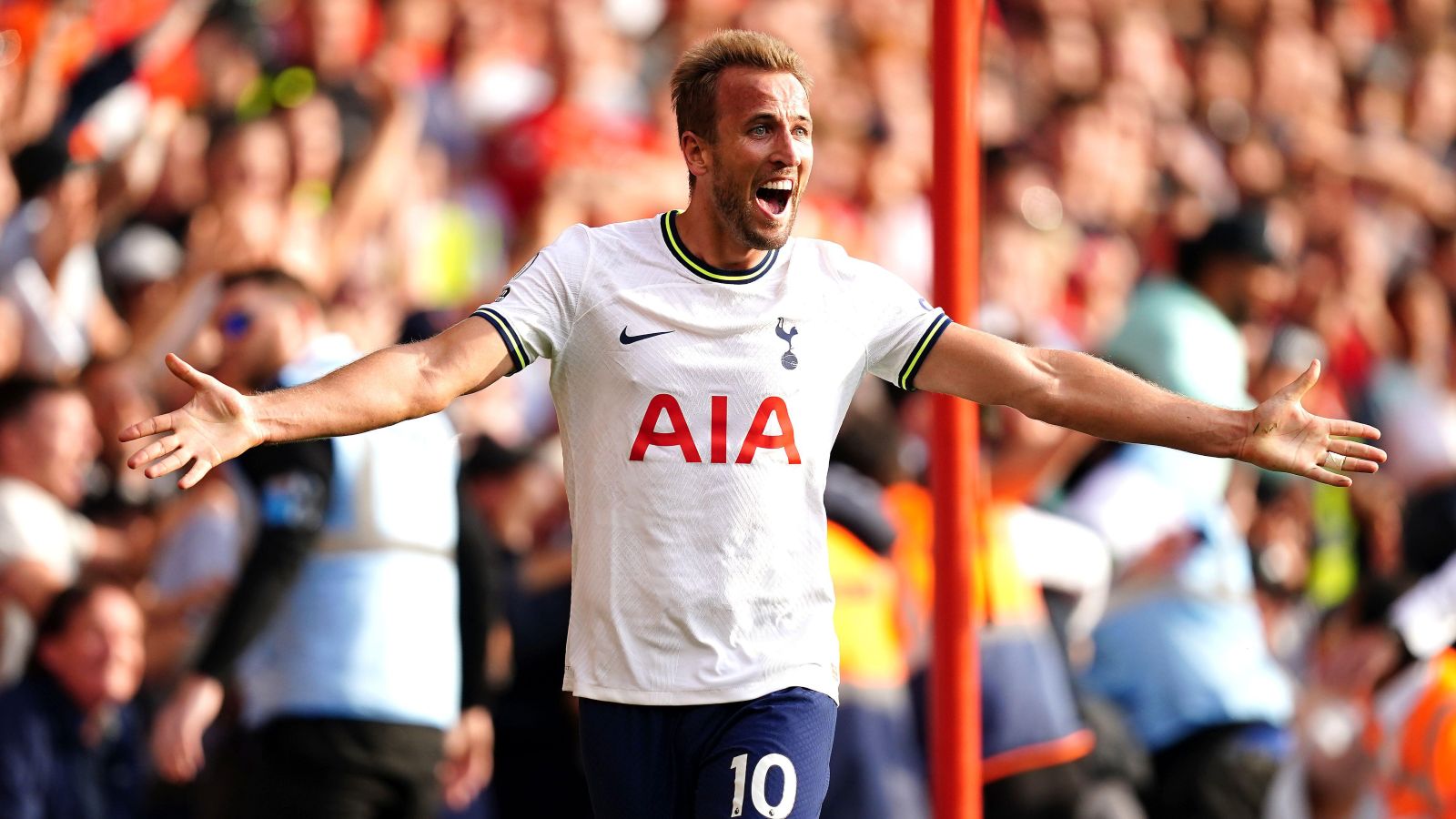 Kane scored in either half to draw level with Andrew Cole on 187 Premier League goals – third in the all-time list with only Alan Shearer and Wayne Rooney ahead of him – and ensure his side’s unbeaten start to the season continues.

They are up to third behind leaders Arsenal and second-placed Manchester City, suggesting they are in the mix for a title challenge.

Kane also missed a second-half penalty as Dean Henderson ended a run of 22 successful conversions from 12 yards in a Spurs shirt.

Antonio Conte’s side were tested by a spirited Forest side, who again showed they are not here to make the numbers up.

Morgan Gibbs-White and Neco Williams had the best of their opportunities but they could not repeat their opening-day victory over West Ham, with a daunting trip to Manchester City coming up in midweek.

Steve Cooper’s men were up for it at the start, hunting another prized scalp.

But Spurs found the perfect way to quieten down the home ground as they went in front after just five minutes.

Kane’s touch set Dejan Kulusevski away and after advancing up the pitch, the Swede returned the ball to the England captain, who found the bottom corner from 20 yards in clinical fashion.

Spurs then had enough chances to have the game wrapped up by the midway point of the first half.

Kane was denied by a last-ditch tackle from Joe Worrall after Pierre-Emile Hojbjerg played him on goal and then Son Heung-min whipped a first-time effort just over from the edge of the area.

Kane was again played in after another quick break but drifted his shot wide.

They could have done with one of those efforts going in as Forest came on strong and had their visitors penned back for the majority of the first half.

Lewis O’Brien forced Hugo Lloris into a diving save with a shot from distance while the France goalkeeper also had to be alert to claw away a cross with Jesse Lingard lurking at the back post.

Forest’s best moment came five minutes before the break when Lingard laid off Harry Toffolo’s cross to Morgan Gibbs-White, but the record signing could not keep his shot down.

Spurs had another perfect chance to give themselves breathing space when they were awarded a penalty in the 53rd minute as Steve Cook deliberately handled Ivan Perisic’s cross.

There was a lengthy delay as VAR checked whether Cook should have been sent off, with the review system agreeing with referee Craig Pawson’s decision to book the defender.

And when the penalty was finally taken Henderson produced the heroics again, just as he did against the Hammers a fortnight ago, as he dived full length to his right to palm away Kane’s powerful kick.

It was the first spot-kick Kane has missed for Tottenham since February 2018.

From then it was end-to-end 100mph stuff and Forest could immediately have levelled but Williams dragged a shot wide at the far post.

The game really opened up and Spurs began to prosper on the counter attack and again had enough chances to be out of sight.

Son broke the offside trap but shot straight at Henderson at the second attempt, Kulusevski saw two goalbound efforts blocked and Hojbjerg shot when he should have squared it.

Eventually the killer second came in the 81st minute as after Ryan Sessegnon messed up a counter attack, Richarlison won the ball back and sent in a delicious cross with the outside of his boot that was begging to be headed in to an empty net, with Kane duly obliging to see out the win.