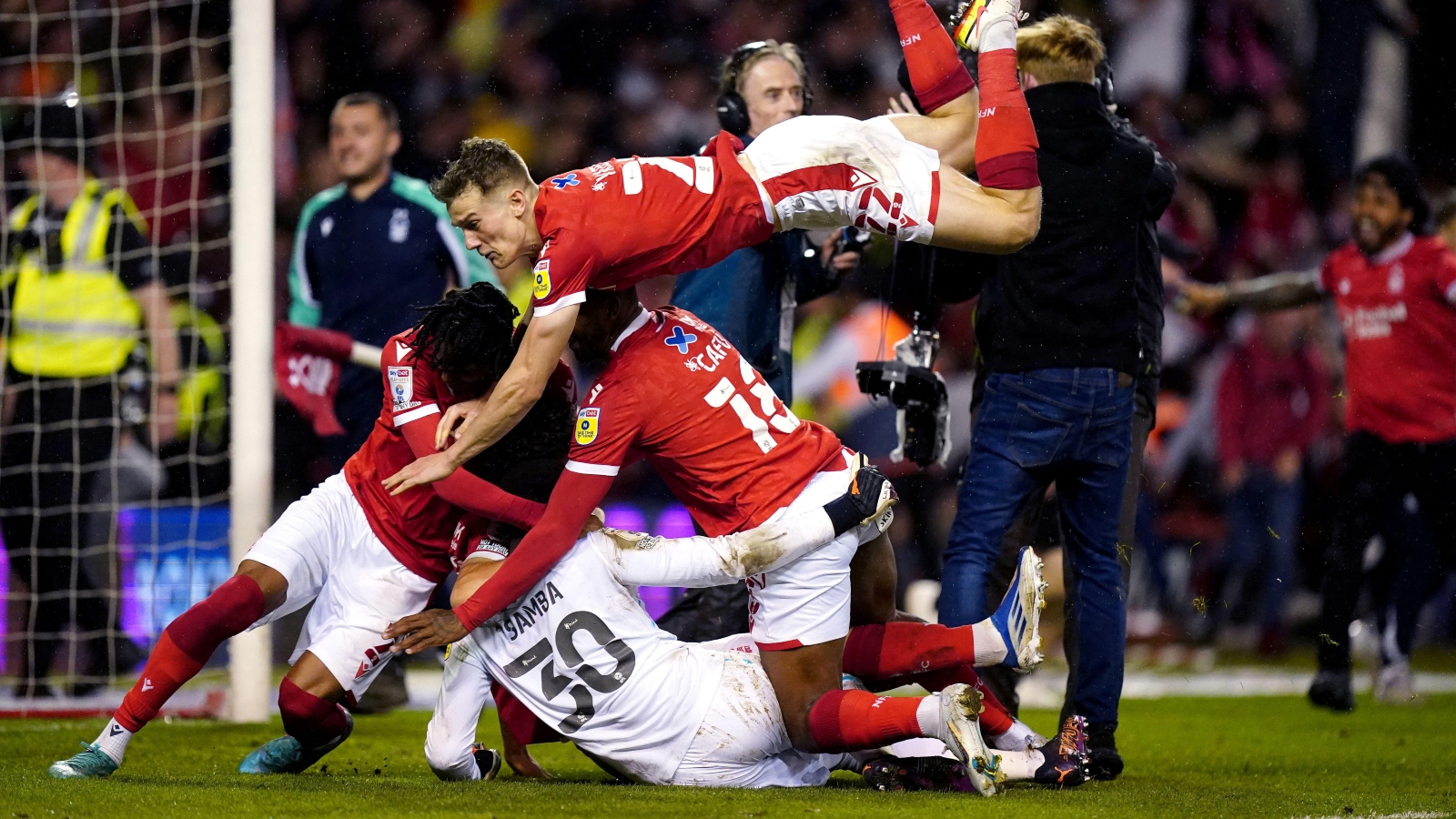 Nottingham Forest will take on Huddersfield Town in the Championship play-off final after a dramatic penalty shootout victory over Sheffield United.

The Blades had dragged themselves back into this semi-final despite losing the first leg 2-1 and trailing at the City Ground to Brennan Johnson’s opener as second-half goals from Morgan Gibbs-White and John Fleck took the tie to extra-time.

Brice Samba produced a special save from Iliman Ndiaye as the tie finished level at 3-3 on aggregate after 120 minutes and the Congolese goalkeeper then denied Oliver Norwood, Conor Hourihane and Gibbs-White to send Forest through to a showdown against Huddersfield at Wembley Stadium on Sunday, May 29.

Johnson, Cafu and Steve Cook all scored their spot-kicks and while Joe Lolley fired over it was inconsequential after Samba saved from Gibbs-White to prompt a pitch invasion from jubilant Forest fans.

Forest, bottom of the second tier after seven games when Steve Cooper took charge in September, are now just one win away from a return to the top-flight after a 23-year absence.

The hosts held the upper hand after the first leg although they conceded late on at Bramall Lane and were pushed all the way.

Forest were initially tentative, pushed back into their own half as rain lashed down at the outset, and while John Egan’s bullet header missed the target it was a warning shot.

Samba saved superbly soon after, rushing out of his goal to smother Ndiaye’s shot after he was put through one-on-one from Gibbs-White’s exquisite pass with the outside of the right foot.

From nowhere, Forest reclaimed their two-goal cushion as Scott McKenna’s long ball was collected on the left by Sam Surridge, whose square pass allowed an outstretched Johnson to send beyond Wes Foderingham.

Backed by a cacophonous crowd, the 19th-minute goal seemed to cast off Forest jitters and they poured forward with purpose although at the other end, Ndiaye saw a shot through a crowd comfortably saved.

Tensions boiled over before half-time when Paul Heckingbottom appeared to take exception to Djed Spence dawdling on the touchline and shoved the ball into the defender’s midriff, sparking an unseemly melee that ended with the Sheffield United boss receiving a yellow card from referee Michael Oliver.

But any thoughts the visitors were becoming desperate were extinguished as this time they punished Forest for again being slow out of the traps two minutes after the resumption to bring the tie to life.

Gibbs-White provided the finish, sweeping across Samba from Sander Berge’s low ball to the near post, moments after Cook had produced a last-gasp tackle to thwart Ndiaye as he ran through on goal.

BRICE SAMBA IS THE HERO AND NOTTINGHAM FOREST ARE GOING TO WEMBLEY!! 🙌

Nerves around the ground heightened as Sheffield United enjoyed a spell of sustained pressure, with Forest unable to mount much in response, and they were rewarded in the 75th minute as George Baldock’s cross after a lung-bursting run down the right was turned in by Fleck to level the scores on aggregate.

Matters nearly worsened for Forest when McKenna overhit a backpass past a scrambling Samba and both players were relieved to see the ball drift harmlessly wide, heralding an additional 30 minutes.

Sheffield United had the first chance as Gibbs-White fired at Samba from an acute angle before Forest substitutes Lolley and Keinan Davis combined, the latter thrusting a leg at a cross which Foderingham kept out.

Sheffield United might have won it late on but Samba produced an astonishing point-blank save to deny Ndiaye from six yards although the keeper’s heart would have been in his mouth at the death when former Forest defender Jack Robinson went down under his challenge.

Oliver did not point to the spot or issue Robinson what would have been a second booking as the game went to penalties.

Samba guessed right to deny Norwood then tipped Hourihane’s effort on to the bar before saving in the corner from Gibbs-White to spark frenzied scenes on a memorable evening for Forest.