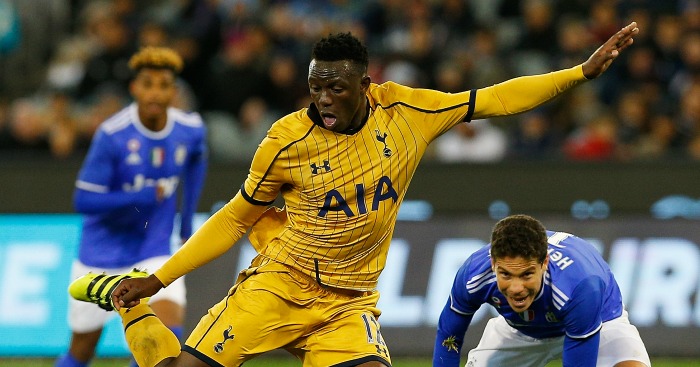 Mauricio Pochettino has cited Victor Wanyama’s ability to play at centre-half as a reason not to invest in more defenders.

Wanyama joined from Southampton for £11m this summer, principally as a central midfielder, but Pochettino says he can play in central defence.

“Jan Vertonghen is in London but he is training very well now. He’s very close to coming back. Wimmer, Alderweireld and Eric Dier and Victor Wanyama can play centre-back. And then young players like CCV [Cameron Carter-Vickers] and Dominic Ball. We have enough players in that position,” said Pochettino after watching his young defensive partnership suffer against Juventus.

“He is going well in the last few days and we’ll see when we arrive Monday and start training with all group what condition he is. If it’s not possible [for him to play against Everton], we have players enough to replace him.”

Wanyama last played competitive club football at centre-half for Celtic in February 2013 when he understandably struggled to cope with Michael Higdon, who scored in a 2-1 win for Motherwell over the Bhoys.

I like the look of Wanyama. He's just your standard, no frills def midfielder. Does a really good job mopping things up ahead of the CBs.

Pochettino still expects to sign more new players for Tottenham this summer after the arrivals of Wanyama and Vincent Janssen, saying: “I expect some signings in the next few weeks — we’ll see what happens. We expect some activity, yes.”