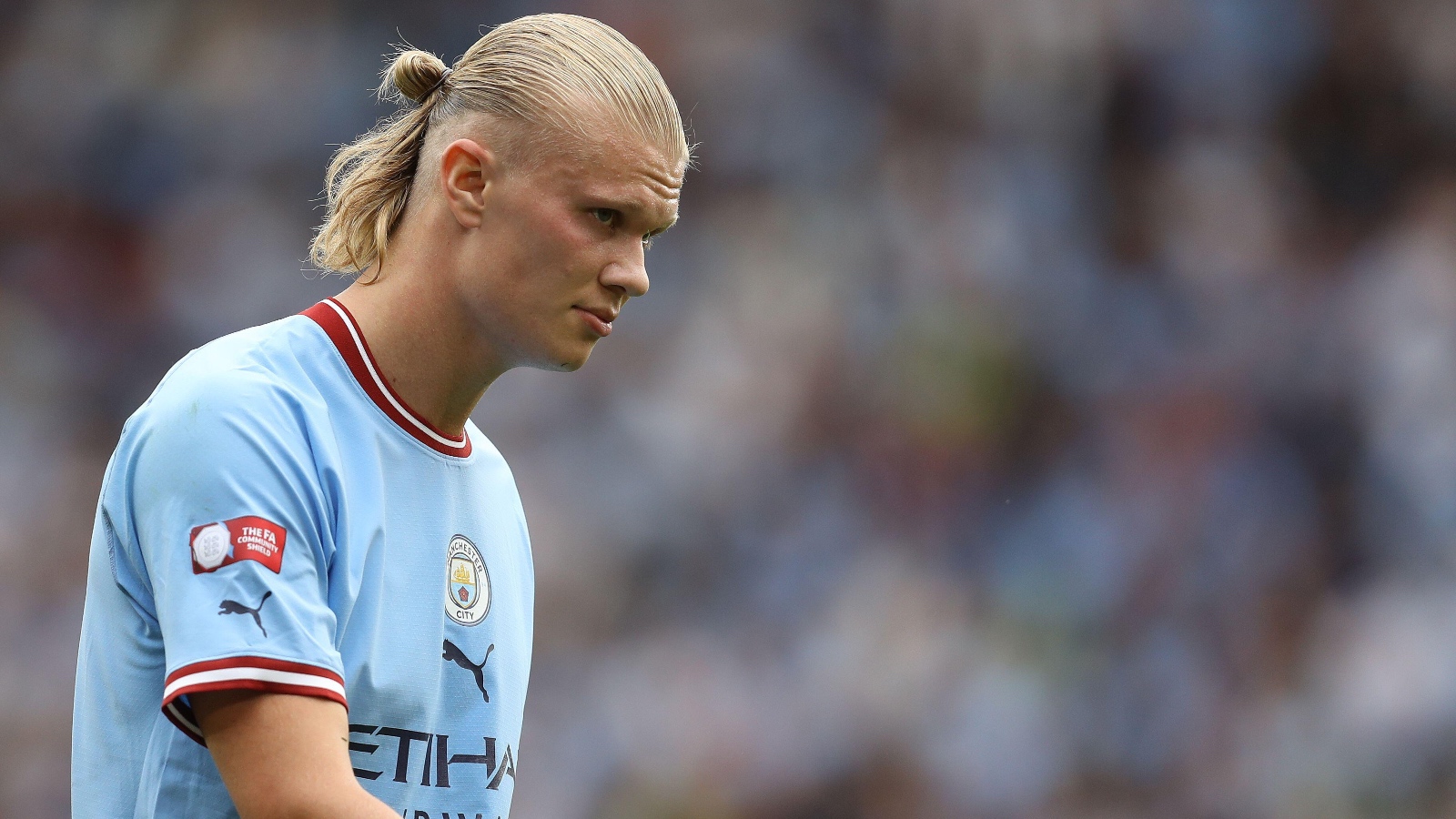 The Mailbox couldn’t resist a bit of Nunez v Haaland, while Liverpool fans embarrass and Arteta’s plan is clearly clear. Send your thoughts to theeditor@football365.com.

Tasty Nunez v Haaland
I don’t think you can judge the Charity shield as a competitive game but you definitely can look at it as a good pre-season game that gets played out at a relatively high level.

I said it a week or two ago and I thought it even more today; I think Haaland will need some time to settle. A few times today he set off on runs early and ended up offside but the City team tend to transition through midfield. He didn’t seem 100% comfortable to me and that miss at the end won’t help him.

Foden is such an incredible talent. Stupid haircut, great baller.

Nunez looked pretty tasty to me. Quick, aggressive and fitted in to the way we play really well. Probably should’ve scored two today.

Diaz is a funny one. I thought preseason would be great for him to understand the team better and improve his final ball and finishing. I feel like what he was last season was similar to what he’ll be this season. Ultimately that’ll make him a very good player but not strictly world class in the way Mané has been for Liverpool. That said the quality in our squad now is such that we don’t strictly need another Mané to still be really strong.

This could be the season for Harvey Elliott to properly emerge. He’s got some real talent and last season injury completely screwed him. I think he will get a lot of chances in midfield and attack and I think he’s going to impress.

So f**king excited for the season.
Minty, LFC

So when that clip did the rounds of Nunez looking foolish I didn’t pay much attention, I also didn’t when he scored 4. Pre season really is all about fitness and nothing more.

But there is an amusing irony that everyone mocked Nunez and said he would be a failure while simultaneously claiming haaland would be an instant success, only for haaland to do two of the most embarrassing misses ever while his opposite generally played well and scored.

For the record i think haaland is an excellent player but it might take him a little to adjust to the faster and tighter marking of the premier League but I’m sure he will be a success.
Lee

Do me a favour, Matthew
Well that was a fun game of football. Not gonna read too much into the result of a pre-season friendly but this one was played with pace and intensity and I was encouraged by how Liverpool played.

Unfortunately most teams won’t play that way against City even though they can be got at if some of the other teams in the league are a bit braver.

In other news, nice article Matthew Stead but do me a favour and admit that your article would have been written in the exact same (but opposite) way had Haaland scored one and made one in a Man City 3-1 win.

Embarrassing Liverpool fans
Well that was a really good game, both teams playing well in phases and probably the right result in the end. I’m a Liverpool supporter, so I am obviously pleased with the result and performance, but what do I feel? Embarrassment and anger.

Only days / weeks after being told this kind of shit has to stop, some Liverpool ‘fans’ still think it’s acceptable to be bringing flares to a game. But knowing that the consequences have been made clear to them, instead of holding them and waving them about, they decide to throw them onto the pitch. Nice one billy big bollocks, you’re so cool, and so brave.

If this carries on someone will get hurt. An errant throw could hit someone in the eye, no?

Why are these thing even on sale? Just ban them and the problem goes away. I understand that there are some genuine reasons (eg. maritime safety) where they are required, but this could be properly regulated.

Call me a killjoy, I don’t give a shit.
Ada, LFC, Pissed Off Town.

Arteta’s plan
Say what you want about Arsenal but you cannot deny this is a club that has a clear plan. Arteta knows exactly how he wants this team to play and you could hear it in the interview with Edu. The main problem with Emery was his constant tweaking and chopping. It makes recruitment difficult when you can’t say with certainty what the manger is looking for. We don’t just sign players because they are good, we sign players that fit the system and there is no better example of this that with Pepe. Do you think Arteta would have spent 70 mill on Pepe? With a plan, Edu has been able to recruit the type of players that fit this system (even without champions league football). We saw this plan last season. It was just unfortunate that Aubameyang let us down and KT, Partey and Tomi weren’t fit towards the end of the season.
I know there is still some work to be done. We obviously need at least one midfielder, someone who can cover for Partey rather than Xhaka (I assume this is the hesitation with Tielemans as he is not a ball winning midfielder). With KT fit, it is obvious Zinchenko will step into Xhaka’s position. We also still need an out an out winger to cover for Saka. There’s no instant solution to fixing this rot. When you look at Liverpool and City, you’re looking at years of work with a plan.

P.S also have to say I’m looking forward to watching the all or nothing season next week.
Damola, Bremen

Sir Alex is in the building
£55million for a teenager, are you having a laugh? RB Leipzig think Man United can be played around with the way de Jong messed with our hearts. I’ve got news, Sir Alex is back in the building and such shenanigans will be a thing of the past.

The season is about to start and we haven’t bolstered our squad to my full satisfaction. We should pay the amount Ajax are asking for Antony because we need such talent in order to bridge the gap to City and Liverpool.

ION, Ronaldo thinks he’s the King of Manchester. Eric Cantona wants a word. Plus, Ronaldo wouldn’t look half as good with the new United shirt’s collar turned up.
Melveaux [Who shall now be known as Anyone But City or Liverpool (ABCoL)]

Despicable Atletico
So, I’ve just watched the most despicable team on the planet, kick, cheat, dive, moan and generally shithouse their way to a 1 nil win in a pre-season game against United. Anthony Martial looks a different player under Ten Hag until he was substituted after constant snide assaults from the opposition, United pressed well and looked sharp and but for some ropey finishing should have won the game. Result not so good, general overall performance excellent.
Paul Murphy, Manchester

Town thoughts
A few musings on the game on Friday.

God that was a poor first half. Burnley could, and should, have been 3-0 up. Town were disjointed, no energy, no enthusiasm, nothing. So disappointing.

Should have been a penalty, but then the goal should have been disallowed for offside with the player obstructing the keeper. Not that it mattered, Burnley definitely deserved the win.

Second half was slightly better but that’s not a compliment, at least there was a bit of something about the players, and an inclination that some of them actually wanted to be out there.

Fair play to Burnley, and Kompany. He seems to have them well drilled and they’ll cause a lot of teams problems this year.

As for town I really hope this doesn’t signal a relegation fight. The core talent is there in the squad but for the first game and players already looking disinterested it doesn’t bode well. A lot of fans are frustrated with Dean Hoyle (chairman) but I’d rather his way of running the club, then a free spending one who leads us down the Derby path.

Touching on womens football a little it was also with resignation I watched the time wasting and feigned injuries tonight. It’s been so refreshing watching football without this it was jarring to see it all again. Good luck Sunday England.

Oh one more point a ‘friend’ sent me a video of which i’d managed to avoid since the play off final, in which a Forest player gave thanks to the referee and VAR. I cannot tell you how much I am looking forward to, and praying, that Forest get fucked over in each and every match with VAR, and then get relegated with 0 points.

That is all
Sara