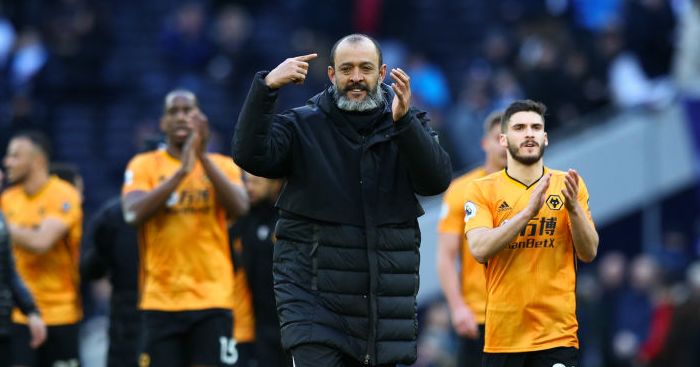 Back in December, Conor Coady did an interview with Sky Sports in which he discussed his role in the middle of the Wolves defence. Coady is one of three centre-halves at the base of Nuno Espirito Santo’s formation and, in relation to the rest of the Premier League, his position is unusual.

“We play a totally different way to normal centre-halves,” he told Adam Bate. “I have centre-halves either side of me and then my job is to try to organise as much as possible.”

The difference is in Coady’s deep starting point. With testimony from John Ruddy, the article described how Wolves’ backline needs to be closer to Rui Patricio, to compensate for the goalkeeper’s tendency of playing much closer to his line. As a result, Coady’s ‘defensive actions come – on average – at least five yards closer to goal than any other defender at a top-eight team.’

The statistics, which have obviously since changed somewhat, described that in more detail. At the turn of the year, 70% of Coady’s touches had occurred inside his own box, comfortably the most in the division. But if that dynamic began life as a necessity, then it’s been adapted into a strength. Coady had also played by far the most accurate long passes of any defender in the league, some 42 more than Virgil van Dijk in second place.

It’s just a small detail and yet it seems typical of this side. Wolves must be an analyst’s dream; they’re full of all these little tactical quirks and they seem to have been assembled with such care.

What’s also interesting – particularly for a side who are in with a very real chance of Champions League qualification – is that they haven’t been built in an obvious way. Instead, they’re full of players who have had to have their potential unlocked and adapted. Coady is a good example of that, but so too is Raul Jimenez, as are Adama Traore, Matt Doherty and Diogo Jota.

Santo’s team fits together. These pieces have been carved in a way which not only makes best use of their raw material but allows the components to slot in next to each other. As a result, watching Wolves isn’t like watching eleven separate parts, but more like looking down on a single, adaptive entity.

Credit for which, of course, goes to their head coach. Santo’s stock has never been higher. He was reportedly in the conversation to succeed Unai Emery at Arsenal. He should have been part of Daniel Levy’s pause for thought before he lunged towards Jose Mourinho. And, with maybe a few exceptions, he would be worth an interview for nearly every elite side in Europe.

The trouble with good stock, though, is that it’s temporary. For coaches in Santo’s situation, there’s always assumed to be a perfect departure point which, if missed, isn’t likely to come again.

Eddie Howe might find that out the hard way. As recently as six months ago he was English football’s brightest and best. Now, with Bournemouth struggling desperately and leaking goals, his name is in hard recession.

In Howe’s case that’s probably fair. For all he’s achieved at Dean Court, he remains the manager of what is still – in terms of its infrastructure – a low Championship or League One club. That frames his achievement, but it also underlines that Bournemouth are well beyond their capacity already and have little growing room left.

With Nuno and Wolves, it’s more complicated – are we sure that there’s a better place for him than Molineux?

It’s worth dwelling on why that environment works. The reductive answer is just to refer to the Gestifute client list and Jorge Mendes’ patronage. But while those are factors – and were important advantages at this project’s genesis – that kind of relationship has never offered a silver bullet solution.

Just ask Blackburn Rovers fans about Jerome Anderson. And maybe enquire about his son Myles, too.

In this instance, with Fosun International and Mendes, the results have been very ordered. Wolves have actually been highly effective with their recruitment. They’ve spent a lot of money, but they’ve done so efficiently. In hindsight, some of the deals they’ve struck have been excellent: there’s Joao Moutinho for £5m, but also Leander Dendoncker for £13m, Diogo Jota for £14m and Adama Traore for £20m.

If those three players were to leave the club any time soon, it would be at a huge profit.

But the depth of their scouting has been impressive, too. Part of the reason why Santo has been able to build something which seems so ‘connected’ is because he has been provided with the right types of personality. That’s relevant in a technical sense, because these are pliable footballers who have proven easy to develop, but it also shows in how this squad has met its increasingly substantial challenges.

Wolves still have one of the smallest squads in the division, with only ten of their outfield players having started more than 20 games this season. With the added Thursday-to-Sunday grind of the Europa League, this is hardly a burden being shared. Again, though, the point is that a group of players’ collective capacity to cope with difficulty (fatigue, travel, short turnarounds) depends on their character and, on this evidence, Wolves’ emotional architecture has been particularly well designed.

That probably also speaks to how more subtle challenges have been handled. For foreign players, the Black Country isn’t the easiest sell. Wolverhampton isn’t a particularly big city and is by no means a millionaire’s choice of location. The hidden danger for Wolves was always that having given these players a platform upon which to make their names, they would start to yearn for more over time; for the bright lights of a metropolis and the wages of a superclub. Most of them share the same hugely powerful, extremely well-connected agent, after all, so realising those ambitions wouldn’t have been difficult.

But success on the pitch hasn’t created that agitation and, outside the top six, that’s extremely rare. Even inside the top-six it’s unusual.

It helps to demonstrate why Wolves isn’t necessarily a club with a glass ceiling. Or, at least, it’s one where it’s not obvious yet where that glass ceiling occurs. That’s what differentiates them from others in this situation. They don’t have a rigid shape. With Fosun’s resources and the calibre of players that continue to arrive, that definition is still under construction.

It’s also what makes the idea that Nuno Espirito Santo must take a ‘next step’ so questionable. Where would it be to and why? Would it even offer a genuine enhancement on his present working conditions?

There’s plenty to suggest it wouldn’t. On the basis that he likely isn’t attractive to the true superclubs – those on the Manchester City, Paris Saint-Germain, Barcelona and Real Madrid strata – his chances of bettering his situation are slim.

Had he been approached by Arsenal, for instance, he would have been considering an opportunity offered by a disengaged owner, to manage a jumbled squad, and with the support of a recruiting department with a very, very mixed record.

If – unlikely as it sounds – Manchester United were to offer him a job, then it would be one without the support of a director of football. It would also be within a footballing realm where, as the unintentionally hilarious commentary of Richard Arnold continues to prove, sport just isn’t the priority.

It’s the most watched league in the world, but there is dysfunction everywhere. In fact, the Premier League’s vast revenues seem to encourage these flaws and imprecise systems.  So – yes – England offers steps up in status and larger salaries in more populous areas, but the recompense for that is often to tolerate mixed agendas and power structures which are shaped by ego, naivety or, in a couple of cases, a noxious blend of both.

The opposite has worked for him at Wolves: the tranquillity, the clarity and the lack of noise.

The argument for someone like Nuno Espirito Santo looking beyond Wolves has some compelling points. But the counter point is even stronger. He has everything he needs already; within an organisation where everything seems to actually work; at a club which is on its way back and still climbing.