Wolves must beat Chelsea on Sunday to secure a top six finish. 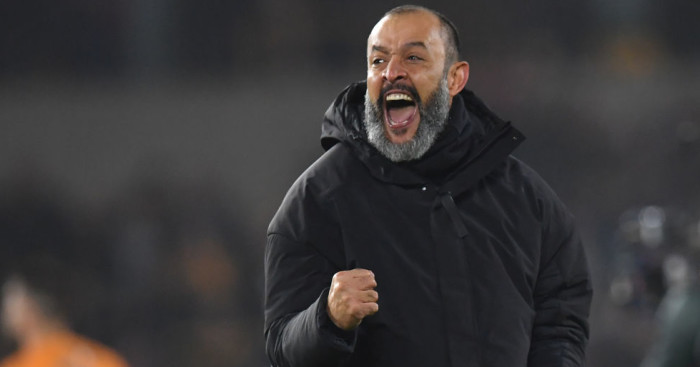 Nuno’s side currently sit sixth in the Premier League on 59 points, surpassing last season’s total of 57 by beating Crystal Palace 2-0 at Molineux on Monday.

Wolves must win at Chelsea in their last match on Sunday to guarantee a top-six finish, although they could still secure Europa League football for a second successive season by winning this year’s competition.

“We’ve been able to improve ourselves and this is our biggest victory,” Nuno said.

“We’ve been able to improve and there’s only one reason why – because the players have committed to it.”

But Nuno, whose side take on Olympiacos in the return leg of their last-16 Europa League tie on August 6, played down the significance of the trip to Stamford Bridge.

“This game is no different than any other,” he said. “Chelsea are a very good team, full of talent in their squad.

“They play good football, but we want to beat them. What happens after, we will see.”

Chelsea must also win on Sunday to guarantee a Champions League place, while Wolves have yet to lose a Premier League game in London in their two seasons back in the top flight under Nuno.

“That doesn’t mean anything,” the Portuguese said. “It’s going to be tough game, you know that, I know that.

“But it’s going to be a good game. We want to compete, we want to play the game.

“You can only focus on the things you can control. The players’ task is on the pitch, our’s is to prepare them well to compete. It will be tough.”

Wolves’ back-to-back defeats to Arsenal and Sheffield United earlier this month were their first in the Premier League since January.

Nuno, who has no major new injury concerns, added: “I’m proud already, very proud, because we have overcome the points that we achieved last season.

“So that by itself is a big success in terms of dedication, believing that you can improve as long as you commit yourself.

“I’m proud of how we have been able to operate as a group. The ‘how’ for me is everything.

“No matter what the result is, it’s how you did it that I think is important.”