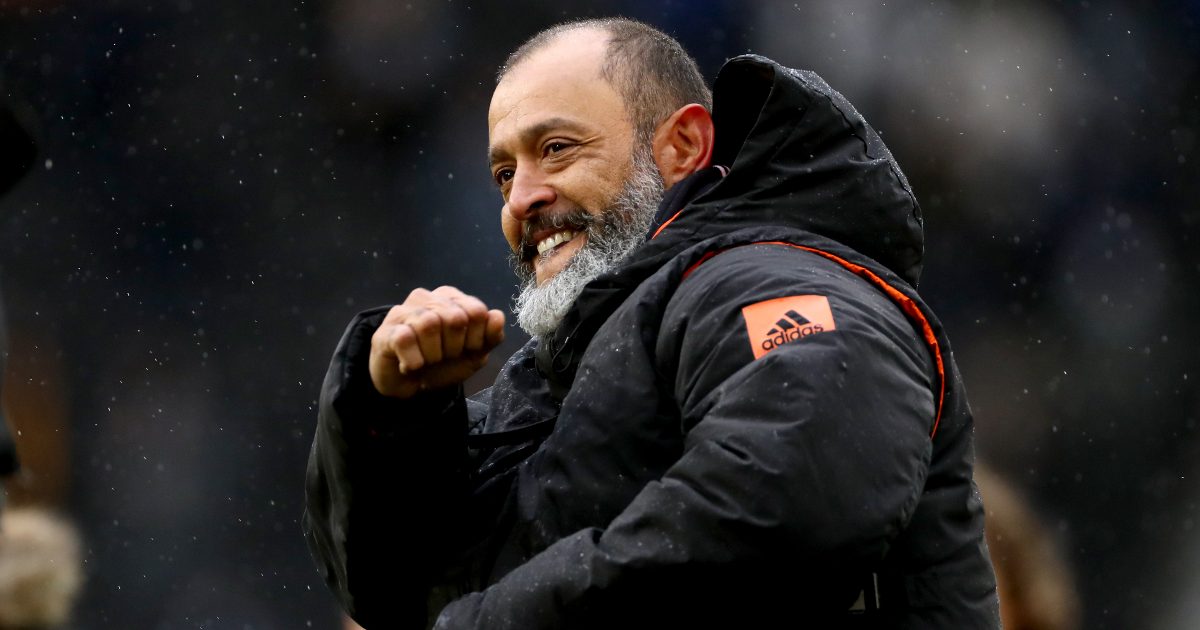 Nuno was right there all along so whatever happens now, Spurs chief Daniel Levy has made a balls-up.

One of the tricks when trying to hoodwink some idiot into giving you a job is to make sure in your application and interview that you repeat key phrases and elements from the job spec.

If nothing else, Nuno Espirito Santo has got this tactic absolutely nailed.

“Having a squad like Tottenham’s, you can only have one DNA, you can only think one way. We have to enjoy the game, we have to play the game. When you have a squad of quality, talented players like we have, the DNA is to make the fans proud, make them enjoy watching. This is our DNA, to make our fans proud of us. There is no question about it that that will happen. We’re going to make them proud and they’re going to enjoy the team, for sure.”

Say what you like about Nuno and his proclivities for defensive football and mediocre Jorge Mendes players or his disastrous final season at Wolves, he is a man who read those Daniel Levy programme notes, studied them carefully, and tailored his PowerPoint presentation to fit. DNA, proud, DNA, enjoy, DNA, quality, proud, enjoy, DNA, proud, DNA, DNA, DNA. Don’t worry about it all being bollocks, nobody ever checks these things.

For a lot of Spurs fans, there will be a sense of relief that the increasingly embarrassing and desperate manager search is at least over. Nuno is not a terrible manager and there is just about enough in his CV to suggest he could do… okay. But that’s part of the problem.

The ‘sh*t Mourinho’ tag he’s been labelled with on some corners of social media is a touch unfair because social media always is, but it does ring true. He is objectively less unpleasant than Mourinho, less divisive, less self-obsessed. Whatever happens to Nuno’s Spurs, it’s hard to picture it being quite so bleakly unpleasant as the four months of bitterness and recriminations at the end of the Jose Show.

But he is at heart a defensive manager a world away from the attacking, progressive entertainer Levy promised in those millstone programme notes; after the way the manager hunt dragged on and shambolically on, it’s just all so distinctly underwhelming.

Fabio Paratici and Daniel Levy can burble on all they want about Nuno’s qualities – and they do exist – but it all begs the obvious question: if Nuno is the best and right man for the job now, what have the last two months been about? He’s been right there this whole time.

There is no denying he has failed upwards. That doesn’t mean he can’t or won’t be a success at Spurs – and he certainly deserves more of a chance than Levy or Paratici, who have made such a monumental balls-up of this process. Either Nuno is the right man for the job, in which case the last two months have been a colossal and needlessly embarrassing waste of time that could have been spent working on the squad, or he was the last/only halfway competent choice available.

Either way, if he succeeds it will be a glorious accident. Levy and his new football director Paratici get no credit here. Paratici has made a grim start to his new job. In a way, it’s a huge positive that this is clearly a Paratici appointment. It’s a clear sign that Levy is at last stepping away from football matters. Levy spending his time concentrating on what he’s good at is an unalloyed positive for Spurs; it’s just a bit of a shame that his final football decision appears to have been entrusting said football decisions to a man who on early evidence has less grasp on this side of Spurs than Levy.

But Nuno is there now, and Spurs’ players and fans will have to try and make the best of it. If you squint hard enough, you can just about see how it might not be terrible. A year ago, after Nuno had taken Wolves to another seventh-placed finish, it might even have looked quite promising.

Matt Doherty should be pleased anyway. Spurs do also have a squad that looks quite well suited to the back three with which Nuno enjoyed greatest success at Molineux. He made Nicolas Otamendi and Shkodran Mustafi look good enough to earn big-money Premier League moves, so maybe he can do something with Eric Dier.

He showed at Wolves he can work with a smallish squad, and there’s no point pretending his arrival at Tottenham isn’t at some level about belt-tightening as the financial realities of the last 18 months hit home.

But there are also so many concerns. Wolves really were rotten last year when they attempted to kick on and instead fell horribly backwards. Nuno’s football really isn’t that far removed from Mourinho’s regardless of how many times he says DNA in powderpuff interviews with the club website.

Three months ago, Levy had the hubris to consider Spurs a club worthy of a place among the very elite of European football who no longer needed to bother themselves with the little clubs. Spurs have now appointed a defensively-minded manager who just left Wolves 13th in the Premier League having made eyes at every top coach in the world and quite a lot of middling ones.

It doesn’t feel like something that’s gone entirely to plan.