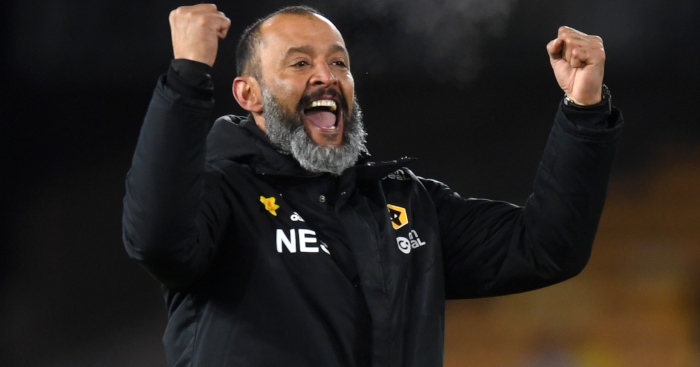 Nuno Espirito Santo refused to put limits on his side after Wolves reached the knockout stages of the Europa League.

They blew a two-goal lead to draw 3-3 in Braga on Thursday but got the point needed to qualify from Group K with a game to spare.

Raul Jimenez, Matt Doherty and Adama Traore had put them 3-1 ahead after Andre Horta’s opener.

But Paulinho and Fransergio netted after half-time to deny Wolves victory.

Despite the second-half disappointment, Wolves are second in the group and sit fifth in the Premier League having lost just once in their last 14 games.

The Portuguese boss has been linked with a move to Arsenal this week, amid growing pressure on Unai Emery’s positions at the Emirates.

But what seems to be the perfect move for Arsenal may not necessarily be good for Nuno himself?

“We are trying to develop and improve and to achieve other results. We don’t have limits, we always try to keep going,” said Nuno.

“It’s not about momentum, if you expect to play when you have good momentum you’ll have problems. We always want to compete, the momentum doesn’t mean anything.

“It’s about preparing yourself for the competition, that’s why you don’t have limits.

“It was our 26th game, we started very early in the season, but the balance has been good and the team is improving.”

Horta’s deflected effort gave Braga an early lead, but Wolves were 3-1 up by the 35th minute.

Jimenez levelled when he nodded in his 15th goal of the season before setting up Doherty and Traore to score within 81 seconds of each other.

Wolves were in control but lost their way in the second half and Paulinho pulled a goal back in the 64th minute.

Braga skipper Fransergio then headed in a leveller with 11 minutes left.

Nuno added: “The first half we started badly but a goal like that can happen. The reaction was very good, it was good combinations.

“The second half was not so good, not so well organised, and we conceded in situations where we must improve.”