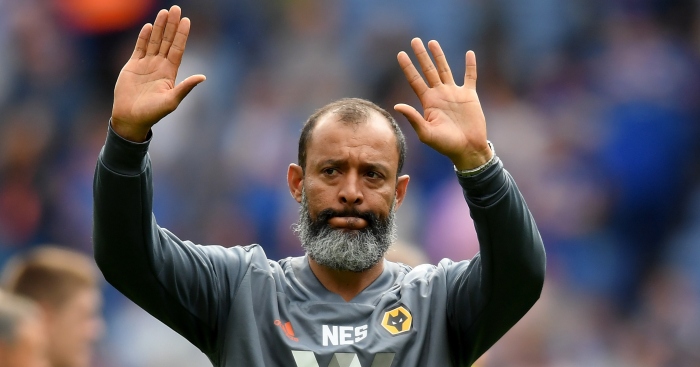 The clash with the Toffees was Wolves’ fourth game in 14 days and came after two legs against Torino in the Europa League qualifiers sandwiched between the 1-1 draw with Burnley last weekend.

Nuno‘s side – who fell behind twice on Merseyside – hit back on both occasions through Romain Saiss and Raul Jimenez before Richarlison’s second sealed the win for Everton, but speaking to BBC Sport after the game, the Portuguese did not blame tiredness for the result.

“It was a very good game,” Nuno said. “The fight was there and both teams fought for each ball and it was a very competitive game against a very good team at Goodison Park. We were able to score two times but we weren’t so good defensively and we didn’t defend like we should.

“[The defeat] is nothing to do with the schedule, this is football. Sometimes you do things very well and you don’t achieve, and sometimes you achieve. What we want is to learn from the competition and grow inside the competition.

“We want to play and we want to challenge ourselves by playing two times a week against fantastic teams. The Premier League is very tough and we have a new challenge ahead of us, so I’m very proud. The cycle was tough, but yes it was very good.”

Following the international break, Wolves host Chelsea before meeting Braga in the group stages of the Europa League.