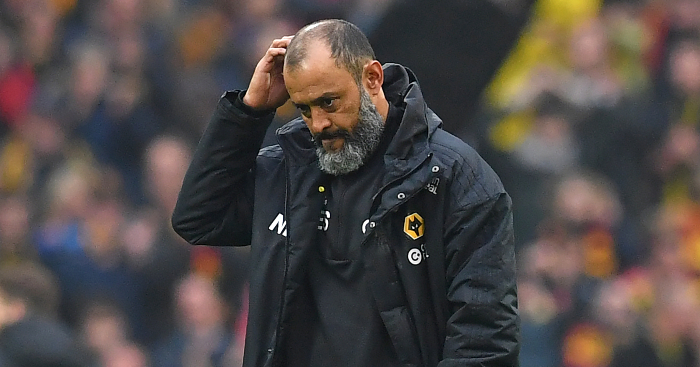 Jimenez struck in the second minute of time added on to spare the blushes of Neves, whose 51st minute attempt was saved by goalkeeper Dominik Greif after Vasil Bozhikov trod on Pedro Neto’s right heel.

Head coach Nuno revealed Wolves have a rotation policy for penalties, and on Thursday night, it was Neves’s turn, even though Jimenez had scored the previous thre times from the spot, against Burnley, Southampton and in the first game against Bratislava.

“Today was Ruben’s turn, he didn’t make it, next time it’s going to be Raul, hopefully he will make it – this is the moment we have to decide,” said Nuno.

“Ruben has to improve. He kicked it very bad, he kicked it so bad. You have to give credit to the goalkeeper but it’s the perfect spot to stop it: medium high and slow. Bad! He has to practice tomorrow. A lot.”

Neves netted from 12 yards away to Pyunik earlier in the season and has previously been successful from the spot last season at home to Tottenham and away to Everton.

“We practice a lot in the training sessions, we have designated penalty takers.

“This time it was Ruben, he was not happy because he didn’t kick well, and he’s conscious of that so he must work hard,” added Nuno.

As well as denying Neves from the spot, Grief made fine saves to foil Joao Moutinho, Jimenez, Matt Doherty and Neves’s 30-yard piledriver.

“He did a very good job but we have to improve,” said Nuno about Greif. “We had chances where we could have done better.

“We arrived many times to the end line and the action must be finished.”