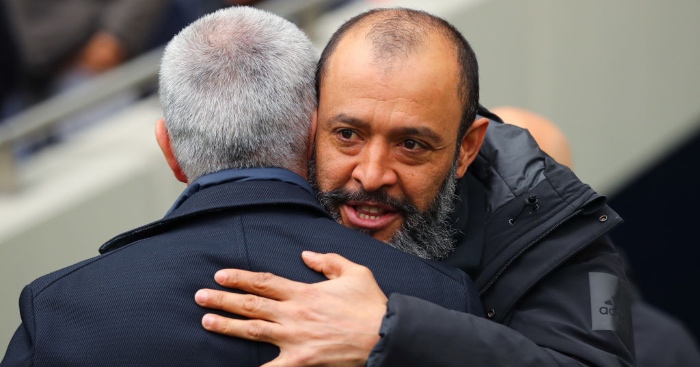 Wolves boss Nuno Espirito Santo hailed Wolves’ energy in their 3-2 defeat of Spurs, and insists Jose Mourinho “is a reference” for him as a manager.

Steven Bergwijn and Serge Aurier twice gave Mourinho’s side the lead only to be pegged back on both occasions by Wolves through Matt Doherty and Diogo Jota.

And Raul Jimenez claimed all three points for Wolves as they leapfrogged Spurs into sixth place.

Mourinho claimed the result was not a fair reflection of the game, and bizarrely hailed Eric Dier’s performance, while Nuno hailed the energy levels of his team after their Europa League success on Thursday.

He told Match of the Day: “It’s amazing the energy levels that we put into the game. They recover very well. It’s a challenge, and when you really embrace the challenge you give everything you have, and this is what we are doing.

“We should start the game better. Tottenham is such an amazing team and can create so many problems. The second half was much, much better, more organised, better pressing and the movements for the goal was good.”

On beating his former manager: “It’s nothing special, was a very, very tough game. I have huge admiration for Jose Mourinho, for me he is a reference.”