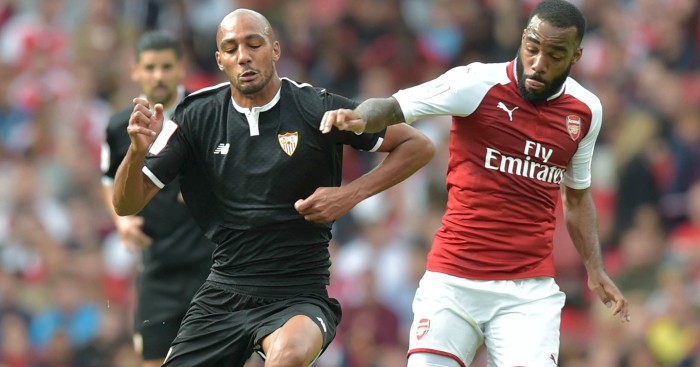 Steven N’Zonzi is reportedly edging ever closer to a January move to Arsenal after the player was given permission by Sevilla to travel to London.

The midfielder – who recently won his first two caps for France – is reported to have played his last game for the La Liga club after he fell out with their coaching staff. The former Blackburn and Stoke star has been left out of their latest squad for Champions League crunch against Maribor, meaning the player has now been overlooked by Los Rojiblancos for their last four games.

It’s believed the midfielder reportedly stormed out of the stadium after being substituted at half-time during the Champions League draw with Liverpool a fortnight ago. Sevilla had been 3-0 down at half-time, but N’Zonzi’s withdrawal coincided with a barnstorming fightback from the La Liga side, who salvaged a 3-3 draw to preserve their year-long unbeaten home run.

As a result, N’Zonzi has not featured since and it is believed the club will let him leave in January should any club match their €40million asking price.

Everton have been linked with the player, who are now managed by his former Blackburn boss Sam Allardyce, but reports in the Spanish media suggest it is Arsenal who are close to wrapping up a deal.

N’Zonzi has flown to London this week, albeit to see his daughter who lives in England, but reports in Spain claim he will use the trip to iron out the finer details of a move to the Gunners ahead of a €40million January transfer.