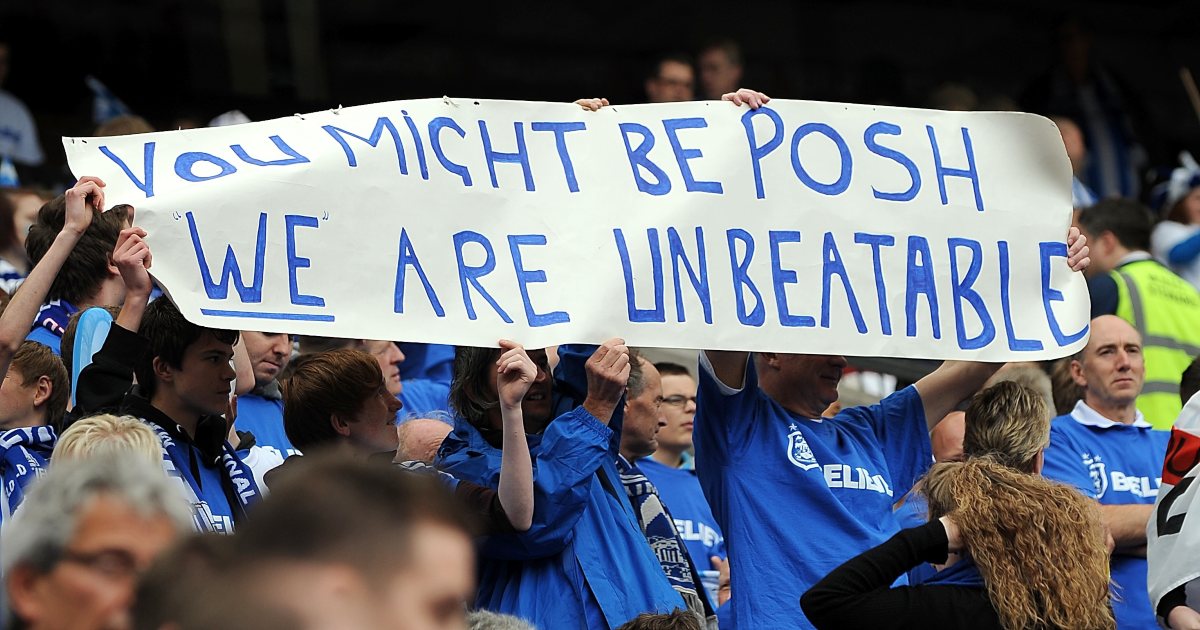 In the latest in our Odd Rivalries series, Huddersfield and Peterborough United come under the microscope.

You can read the rest in the burgeoning series here.

How far apart are these clubs?
As somebody who spent three years at university living in Huddersfield and now resides not far away from Peterborough, I feel well qualified to inform you that these two clubs are a long, yet simple route away from each other.

A one-way journey would take the best part of two-and-a-half hours, more than 120 minutes of which would take place on the A1. All told, the shortest route would see you travel 262 miles in a return journey, though if you choose to walk you would only be completing 112 miles each way. The catch? You have to have a spare day and a half just to get from Peterborough to Kirklees. The good news is if you can catch a bike in West Yorkshire, then it takes just 12 hours for Posh fans to return home, with the best cycle route taking you through the Peak District. How scenic.

In a footballing sense, the two clubs are much closer, sharing a division for the first time since 2012/13 in this campaign. The first decade of the 21st century saw the two go head-to-head much more often, while the clubs were two divisions apart as recently as 2019 when Huddersfield were plying their trade in the Premier League and Peterborough were still mired in League One. The current table has the two looking likely to part ways once more, with Darren Ferguson’s Posh in the bottom three and Huddersfield on the periphery of the play-off places.

How and when did the rivalry begin?
The 1992 Division Three play-off semi-finals, if you’re a TL;DR type. But thankfully, some of you enjoy the finer details, and the majority of the biggest moments between these clubs have come in the end-of-season lotteries. And lotteries are exactly what Huddersfield must have thought back in the semi-finals of the 1992 iteration, exiting 4-3 after two legs. Despite dominating both home and away, a late Michael Halsall leveller in the first leg for 2-2 was followed by an even more dramatic Stephen Cooper winner at Leeds Road in the return leg.

There was little in the way of the kind of controversy which often brings about such hatred between these odd rivals, but Huddersfield held much malice for the Posh, who not only reached the final, but took their place in the division above after defeating Stockport at Wembley, leaving the Terriers with dreams of what could have been.

Nearly two decades later, the two sides met once again in the play-offs, but this time the two sides met in the 2010/11 League One play-off final. Despite scoring 22 goals in all competitions while having an injury-impacted season, Jordan Rhodes was controversially left out of the starting line-up and despite a match which could have gone either way, Peterborough came out on top once more with three goals in seven minutes late on in the encounter to take a place in the Championship from their day out at Old Trafford. If hatred existed before, then this only cemented it.

What’s the most memorable moment from this rivalry?
The most famous moment in this rivalry stems from a match where the two did not even play against each other. With Huddersfield having earned their promotion the season after that second play-off disappointment, and with Peterborough having stayed in the Championship, the two were fighting to avoid relegation back to the third tier going into the final day of the season.

Huddersfield would face their more traditional rivals Barnsley on the final day, while Peterborough travelled to Crystal Palace. Huddersfield needed only a point from their final-day excursion, while Barnsley needed to better Peterborough’s result. All three sides would spend some of the final day below the dreaded bottom line, but the Yorkshire rivals would conspire to send Peterborough down between them in the final minutes of the clash at the John Smith’s Stadium.

Barnsley and Peterborough looked to be surviving until James Vaughan’s late leveller for Huddersfield, which placed the Tykes in the bottom three with Peterborough 2-1 up in south London. Things quickly went south for Peterborough and two late goals conceded meant that a draw in Yorkshire suited both Huddersfield and Barnsley, who proceeded to stop playing any meaningful football and keep each other afloat, basking in shared celebrations as Posh were consigned back to League One football.

Unsporting? Perhaps, but there aren’t two clubs in the land who would have failed to do the same in those circumstances.

On this day in 2013 The Reds did the unthinkable and performed a miraculous ‘Great Escape’ from the drop with a 2-2 draw at Yorkshire neighbours Huddersfield Town, condemning Peterborough United to the third tier with a record points tally for a relegated team of 54 pic.twitter.com/urpyCrJZnO

Are they playing each other this season?
They are indeed, and it will be tasty. Almost a decade on from their last meetings, the rivalry will be ignited again. For nearly 10 years, the hatred has been from afar, both geographically and divisionally, happy enough to revel in each other’s fortunes rather than causing them directly. That could all change this season. The two meet under the London Road floodlights in the first game of November, while the opening fixture in March will see the return fixture in West Yorkshire.

What’s the future for this rivalry?
As above, there is much to look forward to as the two clubs reignite a rivalry built up over two decades and laid largely dormant through the club’s differing fortunes over the past 10 years. Darren Ferguson is the manager at London Road still despite departing between that play-0ff final and the subsequent fixtures and will stir many old feelings, while Carlos Corberan will look to write his name in the annals of the fixture.

Traditionally, the fixture has been balanced over the years. Despite Peterborough having the edge in the biggest games, the two clubs have won 10 apiece coming into this season with six draws to share too, meaning there is everything to play for between the two odd rivals.