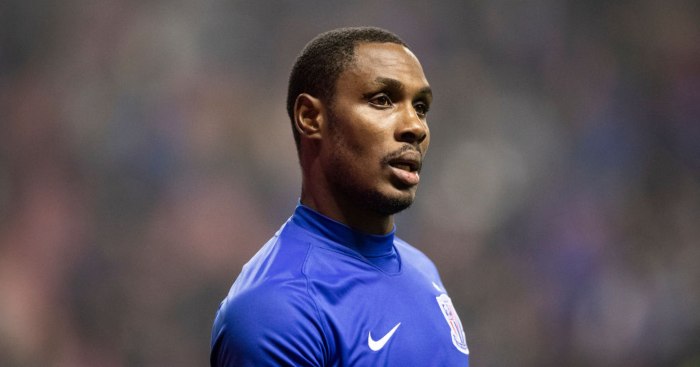 Manchester United new boy Odion Ighalo will go straight into the squad for Monday night’s game at Chelsea, despite missing the club’s warm-weather training camp due to travel restriction concerns.

The 30-year-old completed a surprise loan switch from Chinese side Shanghai Shenhua on deadline day, but did not head to Spain with Ole Gunnar Solskjaer’s group because of the coronavirus outbreak which has so far killed more than 1,000 people in mainland China.

The United boss said over the weekend that the club had left Ighalo in the UK as they were unsure whether he would be allowed to return to the country, having arrived from China in the previous fortnight.

But despite missing the trip to Marbella, Solskjaer has confirmed that the striker will go straight into the squad for the trip to Stamford Bridge after the winter break.

“Yeah, he is going to travel with us,” the Norwegian said. “We will just see his fitness work this week and I think we will get him sharp.

“We want to integrate him as quickly as we can because, of course, he is desperate to play for us.”

Ighalo had started pre-season training in China before the sudden move to Manchester, where he is undergoing a strength-based fitness regime in a bid to get match-ready.

The Nigeria international’s new team-mates, meanwhile, are benefiting from their Spanish training camp and having some much-needed downtime.

“I think the boys enjoyed a break – they needed a break,” Solskjaer said. “But now they are back, focused and they have been working well.

“With the weather back home as well, this has been an even bigger plus for us. Being in Europe, because the travel isn’t too far, is also a good point because we don’t have too many days before we have to go back and get ready for Chelsea.”

January acquisitions Bruno Fernandes and Nathan Bishop, the young goalkeeper signed from Southend, are settling into a group that will soon be bolstered by the return from injury of Scott McTominay, Axel Tuanzebe and Tim Fosu-Mensah.

“I hope that we will see some of them before the end of this week,” Solskjaer told club media, having seen the trio start the camp doing individual work.

“But next week will be a big week for them as well to get them match fit, so hopefully we can get them back on the pitch with their kit on soon.

“It is a long season. Overall, during every season, every team has injuries and we have been hit badly this year and we have felt the lack of numbers.

“But when everyone is back, the competition for every place is big and hopefully we will have two games every week.

Away from the field, United have formalised their intention to bring rail seating to Old Trafford.

The club have long been in favour of the idea of rail seating in principle and discussed the matter with the two Premier League clubs to have recently installed it, Tottenham and Wolves.

United recently conducted a feasibility study following changes to the Sports Ground Stadium Authority Green Guide and are now looking to bring rail seating to Old Trafford, potentially before the end of the season.

Minutes from the United fans’ forum on January 31 read: “A formal proposal was made to the local Safety Advisory Group in December 2019 to request a trial in a small section of the stadium (up to 1,500 seats in the North East Quadrant).

“Our belief is that the introduction of rail seating will enhance spectator safety in areas of the stadium where – as with other clubs – we have seen examples of persistent standing.

“The SAG committee is reviewing the request. This is not an automatic approval process. We will discuss the proposal in detail with the relevant authorities and will work through their compliance and review processes.”