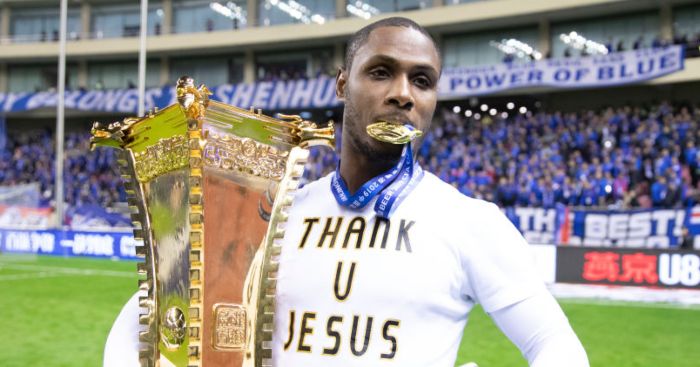 When a transfer window is preluded by misplaced confidence and secretive flights to meet one of the world’s brightest young stars, yet ends with a panicked dash to sign a more than decade older Chinese Super League striker via email, it can never be sold as anything other than a qualified failure. For Manchester United, this was absolutely not the plan.

It is baffling. It is mystifying. It is bewildering. Odion Ighalo, scorer of two goals in his last 32 Premier League appearances for Watford before leaving at his supposed peak *three years ago*, good enough for a club that considers itself the world’s biggest?

And as an alternative to Joshua King? Or Danny Ings? Or Teemu Pukki? Or any of the numerous forwards linked with United this past week? It is a laughable indictment of the structure, scouting and strategy in place that they can sign a 30-year-old on the same day they reportedly competed with Middlesbrough to sign Adolfo Gaich, 20, and on the other side of the world.

It makes no sense. Yet it is simultaneously practical. It is a justifiable ridiculousness, damning and defensible not quite in equal measure, but as a circuitous solution to a straightforward problem nonetheless.

It is hilarious, too. Romelu Lukaku told Ole Gunnar Solskjaer he wanted to leave in March in what he would discover was a wholly reciprocal desire. United had almost an entire year to contemplate the predicament of replacing him and formulating one key idea with a wealth of alternatives.

If this is their answer, they were given the wrong quiz sheet.

But it is something. That is more than can be said for Tottenham, who failed in a similarly late scramble to sign 32-year-old Eran Zahavi. So too Chelsea, now reliant upon 33-year-old Olivier Giroud and the erratic Michy Batshuayi beyond the creaking Tammy Abraham.

For a club that is growing accustomed to setting bars so low that they can be cleared with a trip or a stumble, that will be more than enough.

There is no risk; not really. Not when the real gamble would have been to rely so heavily on the unpredictable stylings of Anthony Martial or the talented but callow Mason Greenwood. Not when Ighalo has scored more goals in a single Premier League season than Martial ever has, nor when he possesses enough experience to absorb a poor performance in an uncreative side far more effectively than Greenwood could.

A short-term loan carries no baggage. An absence of an obligation to buy brings with it no pressure. A mutual acknowledgement that this is little more than a necessary fling and not a lasting relationship suits all parties, provided United take a more appropriate course of action in the summer.

With Marcus Rashford injured, the mistake would have been to sign no-one now. There were far more palatable possibilities, and so many eggs were seemingly placed in the Bruno Fernandes basket that they could not fathom spinning two transfer plates at once.

They deserve censure for that; for relying on a virus postponing an entire domestic league before they could find a potential last-ditch cure for their own various ailments. Yet on a sliding scale of Erling Braut Haaland for around £20m to Josh King for about twice as much, relying on Ighalo for less than half a season sits roughly in the middle.