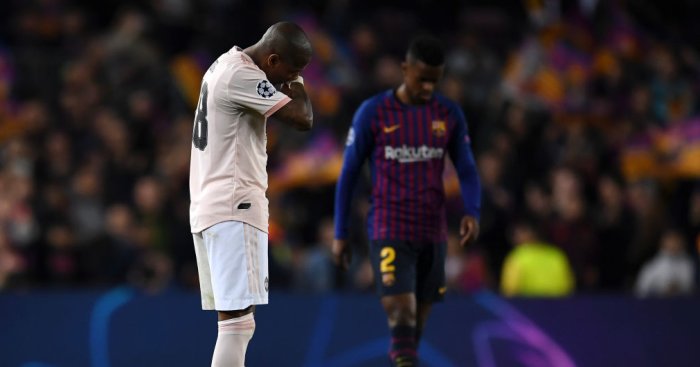 Ashley Young (Manchester United)
Oh bloody hell. So it turns out having a 33-year-old converted winger as first-choice right-back is not a good long-term strategy for a club with designs on the game’s biggest prizes. Nor is playing him at left-back against Lionel Messi.

The Disaster in the Nou Camp had been coming for some time, but that bungled Cruyff turn will be the defining meme. Buy a proper right-back. This cannot go on. Just make it stop. Don’t be racist about it, though, you big twats.

Kieran Trippier (Tottenham)
Coming soon to a ‘one-tournament wonder’ feature near you soon, Trippier had so much fun at the World Cup that he clean forgot there would be more football to play now. He appears to have completely forgotten how to do so.

Perhaps it’s a hangover of the freedom he enjoyed as a wing-back in Russia, but he has entirely neglected his more prosaic right-back duties on return to Spurs who now have two senior right-backs they can’t trust and a youngster in Kyle Walker-Peters who hasn’t had the game time he might have done.

If Spurs did transfers, they should definitely do a transfer for Aaron Wan-Bissaka and send Trippier the other way. It would not be the first time.

Shkodran Mustafi (Arsenal)
Still the Premier League’s fifth most expensive centre-half of all time (yes, that’s all time) at 35 million English pounds and yet this is Shkodran Mustafi’s positioning against one of Europe’s finest football teams…

This photograph of Mustafi's position for City's first goal might be one of the funniest things I've ever seen. pic.twitter.com/fc5Ahw3Ybz

“Mustafi has never been good enough since the day he walked in the door,” said Jamie Carragher after that sh*t-show against City.

The Hank Scorpio lookalike is by far the least trusted of all Arsenal’s senior centre-halves and yet he plays by far the most football. It’s a cruel, cruel twist of fate that he is the most resilient of an injury-ravaged back line. He has only actually been dropped once by Unai Emery; Arsenal beat Chelsea 2-0. But of course Sokratis and Laurent Koscielny then got injured and Mustafi strolled back into the side…about ten yards behind play. Rumour has it that he will be encouraged to find another club this summer. Just don’t expect him to then mark that other club at a set-piece.

Theo Walcott (Everton)
“Let me build the team, let me spend the next £80m, £100 million on the players that will make Everton much much more fluid, much more creative and go forward and score more goals and hopefully finish better than eighth,” said Sam Allardyce as he blasted the ‘false lies’ that suggested he did not play the ‘right’ kind of football for Everton. Having been given almost £50m to spend on Cenk Tosun and Theo Walcott, it is indeed a mystery why he was not given even more cash to build a team to match his vision.

Walcott has not notched an assist since September and has his last goal, in December, was the opener in a 6-2 defeat to Tottenham. Maybe it’s for the best he hasn’t scored since – clearly no good comes of it. When double-checking these mental stats on WhoScored we note that in the strengths and weaknesses section comes the damning yet unarguable burn: Player has no significant strengths. Under weaknesses, it said eczema.

Marko Arnautovic (West Ham)
“I have matured enormously, both as a person and in sports,” said Arnautovic two months after his failed attempt to force through a move to China. Okay.

West Ham ‘won’ the battle and convinced him to stay in a new contract announcement that looked more like a proof of life video.

But there are no winners here. Arnautovic didn’t get his move, West Ham didn’t get any money. All that’s left is a player who doesn’t want to be there, a manager who isn’t sure he wants to play him and a fanbase certain they just want rid now please now please.

Arnautovic had seven Premier League goals by January 2, but hasn’t scored since. Hard to pinpoint exactly what’s changed… He did net a brace for Austria in a 4-2 defeat to Israel so… swings and roundabouts.

Marcos Alonso everyone, someone please tell me what the hell Sarri see’s in him? pic.twitter.com/qbzReDxNGF

Basically, he’s tall. As Maurizio Sarri explained after Emerson Palmieri was excellent at left-back in Carabao Cup victory over Spurs: “Sometimes I had a little problem in the starting XI because we are not very physical, so when we play with three little players in the same match at set-pieces it can be a very big problem to also have Emerson on the pitch.”

Alonso excelled in Antonio Conte’s three/five-man defence but he is being exposed by Maurizio Sarri’s 4-1-2-3 formation – he looks incredibly weak defensively and offers very little at the other end of the pitch unless he is arriving in the No. 10 position to take more shots than the entire Chelsea midfield. His cross record this season? Nine accurate deliveries out of 88. There’s a reason Chelsea fans stare dolefully at Leicester highlights with all eyes on Ben Chilwell.