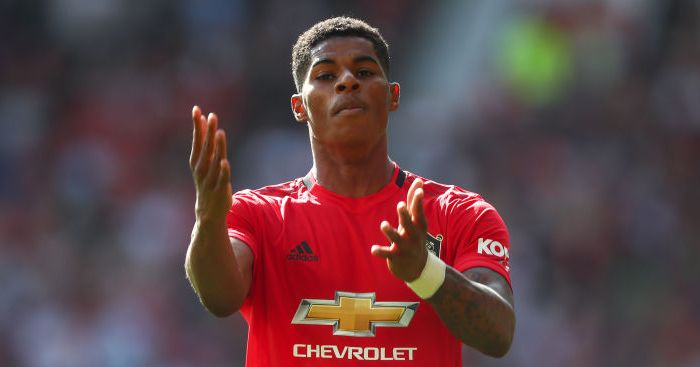 Ole Gunnar Solskjaer has hailed the mentality of Marcus Rashford to “be confident enough” to take Manchester United’s winning penalty against Leicester.

Rashford faced intense criticism and questioning over the international break after failing to impress with England.

The forward started the season well with United by scoring twice in the 4-0 win over Chelsea but had not scored since, and even missed a penalty in the defeat to Crystal Palace.

Rashford atoned for that mistake with the only goal from the spot in the 1-0 victory against Leicester, with The Sun publishing an exclusive claiming he and Jesse Lingard had received ‘the same warning’ from Solskjaer and assistant Mike Phelan about their non-football distractions.

The Sun say Lingard has been ‘told to concentrate more on being brilliant and less on bling,’ as the 26-year-old ‘peddles aftershave and iPhone cases’ through his ‘Be Yourself’ fashion label, part of the JLINGZ brand.

The United management team believe Rashford ‘is also in danger of being side-tracked’ – although quite what by, The Sun do not mention.

After the Leicester game, Solskjaer paid tribute to the forward being “confident enough” to take the spot kick.

“He’s been practising penalties and he can go both ways,” he said.

“He can go through the middle, he was calm and we’re going to get more of them, no doubt about it, because we’ve got players in the box with quick feet and, with VAR now, there’s no chance you’re not going to get them, even though we haven’t got every penalty we should have.

“Going forward, I think we’ll see him slot in a few more.

“Every striker misses a penalty. I’ve seen Maradona and Messi do it. I’ve seen Platini against Brazil and Zico – my favourite player of all time – missed in the same game.

“You’ve just got to be confident enough to step up next time. What’s the worst that can happen?”