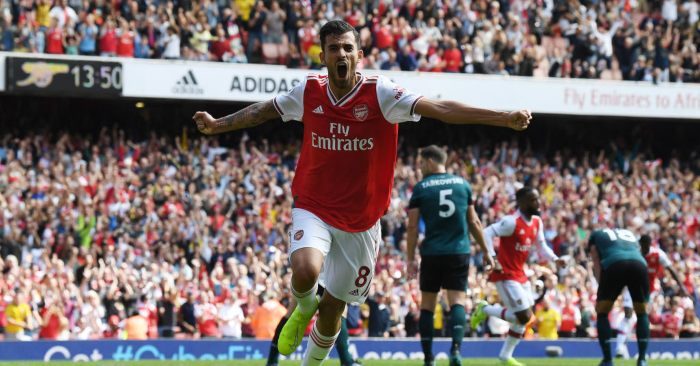 Just as it was becoming really very obvious that Dani Ceballos is a potentially incredible footballer, there was a counter-rumble on social media of cynical Gunners and crowing outsiders; wasn’t it typical Arsenal that their best player is not even an actual Arsenal player? Fast-forward to the emphatic and emotional celebration that greeted his foster club’s second goal – and his second assist – and it no longer seemed to matter. Ceballos is not here for a holiday.

Sharp of mind, quick of feet and blessed with equal portions of industry and silk, Ceballos is exactly the player that Arsenal needed to replace Aaron Ramsey. On this evidence, he is an upgrade; he has a hunger for the ball that Ramsey only ever showed for the glory. He left the pitch after 83 minutes to a standing ovation, having logged the most miles, touches, passes, key passes and ball recoveries. Work hard, play hard, become an instant hero.

97 – Dani Ceballos had the most touches (97), created the most chances (4), and attempted the most passes (70) of any @Arsenal player versus Burnley. Impact. pic.twitter.com/koOyQw5kWd

The celebration that followed that second assist was remarkable because of the nature of that assist. This was no extraordinary piece of skill which demanded equal billing with the sublime finish, but a tenacious ball recovery and a simple poke into the path of Pierre-Emerick Aubameyang. It was a defensive midfielder’s assist and it was celebrated like a man who had been a Gunner for life, rather than a summer.

If Ceballos delivers that kind of performance – and exhibits that kind of passion – again and again over the next nine months, it should not matter a jot if he then heads back to Real Madrid to become a superstar. For a club with a budget, this was an excellent acquisition; they simply could not have bought a No. 8 of this quality with the money they had at their disposal. To borrow one – at a reported cost of £15m in loan fee and wages over the season – was to increase their chances of reaching the Champions League and permanently affording his successor.

You would never expect Jose Mourinho to be gracious about Arsenal, but he could barely have been more wrong when he questioned their signing of the Spaniard last week. “I think they have other Ceballos in the squad,” he said. “I think he’s a good player, but I think they have other Ceballos – when I see [Henrikh] Mkhitaryan, [Mesut] Ozil, Ceballos, they can play in different positions on the pitch but with very similar characteristics.”

We’re not sure we have ever seen a game when either of those other players – both of whom were coveted by Mourinho at Manchester United – have left the pitch having covered the most miles and won the ball back with such hunger. The signs are incredibly promising that Arsenal may have borrowed that most precious of assets: An entertainer who works, a worker who entertains. It’s little wonder that Mourinho was confused.

There is much to improve in this new-look Arsenal team – David Luiz improved but could not solve the eternal Arsenal defence problem, they imposed themselves only in fits and starts, and the central midfield certainly looks a little callow – but there is also much to admire, with Nicolas Pepe’s dynamic 45 minutes hinting at better days to come. This is the first time in ten years that they have won their opening two Premier League fixtures, and a large dose of credit for this second victory has to be ladled at the dancing, borrowed feet of Dani Ceballos.