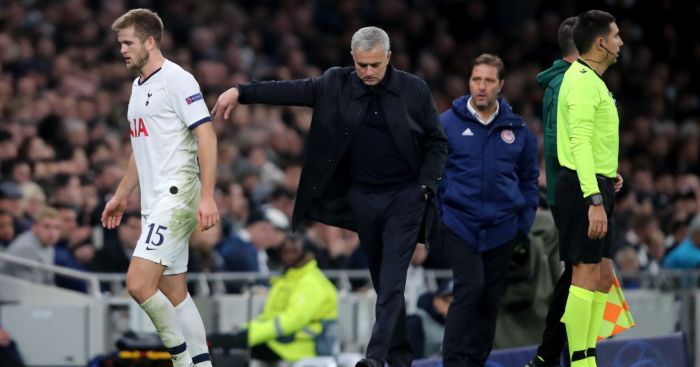 Jermaine Jenas suggested Eric Dier would “be fuming” as he was taken off before the half-hour mark by Jose Mourinho against Olympiacos, though he seemed completely unperturbed as he took his place on the bench. Tottenham were 2-0 down at the time and ran out 4-2 winners in the end, with his replacement Christian Eriksen pivotal in that comeback. Jose provided the England international with a very lengthy public apology in his post-match interview, and in fact Dier may be more angry at Jenas’ assertion that “he looks a bit heavy” as he trudged off the pitch.

Eric Bailly
Mourinho has a history of making humiliating substitutions. Eric Bailly was on the receiving end during the Portuguese’s tenure at Manchester United, hauled off after a dreadful 20 minutes against Newcastle. But again – like with Dier – the move worked. United came from two goals down to win, with Bailly’s replacement Juan Mata opening the scoring for the Red Devils.

The Ivorian didn’t feature in the next six Premier League games, which may be a bit of a worry for Mourinho’s latest victim, but such is the manager’s obvious love for Eric Dier, he need not be too concerned.

Nemanja Matic
Mourinho demands rather a lot from his players. The Portuguese requires absolute dedication, for players to become his disciples and buy into his philosophy completely. The patience and attitude of his squad is often tested on the most public platform possible.

“I felt terrible to be subbed, to be honest,” Nemanja Matic said in November of 2016, recalling a 3-1 defeat to Southampton the previous October. “I am a man first of all and, of course, I felt bad at that moment. But as you know, I didn’t react, I stayed professional.

“Normally some of the players react to that and cause some problems but as you can see I didn’t react and showed respect for the coach and for the club and my team.”

Matic had been introduced for Ramires at half-time with the Blues drawing 1-1. Twenty-eight minutes later, Saints had gone 3-1 up, and Matic was instantly removed.

But it was his reaction that so impressed Mourinho. “He has with me something which marks forever, which was a match where he was on the bench, I play him minute 45 and I took him off minute 70, 75” said the now Spurs manager. “He was really sad. But the next day he comes to me and he says, ‘I’m not happy, but it’s my fault. I’m not happy with what you did to me, but it’s my fault, because the way I was playing I can understand the change. So let’s keep going’.”

Joe Cole and Shaun Wright-Phillips
Mourinho is clearly no stranger to hanging a player out to dry with a first-half substitution, of course. His first spell with Chelsea saw him sacrifice two lambs in a 1-0 defeat to Fulham in March 2006.

The table-topping Blues had fallen behind thanks to a Luís Boa Morte goal 15 minutes in, with a Fulham side who had lost their previous four games running rampant at Craven Cottage. Chelsea had lost to Barcelona and Middlesbrough in their last seven games, and Mourinho was at pains to avoid completing an unwanted hat-trick.

After 26 minutes, the Portuguese had seen enough. But one tactical substitution would not suffice, and Mourinho’s hatred for wingers would rear its ugly head. Both Joe Cole and Shaun Wright-Phillips were dragged off for Didier Drogba and Damien Duff. And they still lost.

Dejan Lovren
“The Tottenham game I was angry. It wasn’t like I was saying, ‘Boys, never mind it can happen, forget about it’. Not even one per cent of that. I was really angry. I took Dejan off after 25 minutes and I didn’t speak to him afterwards.

“But then a few days later I saw him waiting for my talk, so I said, come in. ‘You took me off after 20 minutes’. Because you were bad. But I said to him – maybe this was the decisive moment when he got it – I think he’s a world class centre half, 100 per cent.”

‘Bad’ barely covered the half of Dejan Lovren’s performance for Liverpool against Tottenham in October 2017. The Reds as a whole were terrible, but the centre-half was something else. He made two huge mistakes as Harry Kane and Heung-min Son gave the hosts a 2-0 lead, before Son almost made it three as he struck the crossbar.

Liverpool had actually pulled a goal back through Mohamed Salah by the time that Lovren was hooked. It felt like a career-ending 31 minutes.

Andros Townsend
Manchester United’s 3-0 thrashing of Tottenham in March 2015 is remembered more for Wayne Rooney’s goal celebration than anything else, with the striker making light of his defeat in a kitchen boxing bout against Phil Bardsley in the days before the game. The United captain struck in the 34th minute as a hapless Tottenham had no reply.

Three minutes before Rooney capped off one of Louis van Gaal’s more successful afternoons at Old Trafford, Pochettino had seen enough. But he opted not to make an example of any of his defenders, despite Kyle Walker, Eric Dier, Jan Vertonghen and Danny Rose having been torn asunder. Instead, he sacrificed right-winger Andros Townsend who, according to a Daily Mirror match report, had ‘left Walker horribly exposed time and time again’. Cutting inside and shooting from 30 yards isn’t the best defensive tactic, granted.

Haim Megrelashvili
If Dier thinks his night was bad, perhaps he should walk a mile in the shoes of Haim Megrelashvili. In the space of two consecutive away games in the Eredivisie in March 2008, the left-back started twice for Vitesse, yet played just 21 minutes across both matches.

Jose Mourinho waited 29 minutes to replace Dier, but Aad de Mos had a considerably lower pain threshold a decade ago. Then Vitesse manager, he hauled Megrelashvili off just six minutes into a 4-3 defeat to Twente.

After recalling the Israeli defender to the starting line-up for a 3-3 draw with NAC Breda in the next fixture, De Mos then took his side to AZ Alkmaar. With the score still at 0-0, the Vitesse manager substituted Megrelashvili after 15 minutes, with no signs of injury. Just to stick the boot in further, he would tell the club’s official website that the switch was “too late”, with Vitesse going on to losing 2-1.

Emmanuel Eboue
After 32 minutes, Samir Nasri had to be removed due to injury. His replacement, Emmanuel Eboue, would not even last the remainder of the game.

“Eboue played for longer than I wanted him to,” admitted Arsene Wenger after Arsenal beat Wigan 1-0 in the Premier League in December 2008. It was a nervy, below-par, difficult victory epitomised by the performance of Eboue, who suffered the ignominy of being the substituted substitute in stoppage time. Worse still, Mikael Silvestre came on for him.

Claudio Caçapa
Sam Allardyce described himself as “completely gutted” after his Newcastle side were thrashed by Harry Redknapp’s Portsmouth in November 2007. The boy from Dudley would only remain at St James’ Park for another two months before his eventual demise, in no small part thanks to Claudio Caçapa.

The Premier League has played host to many wonderful Brazilians, but Caçapa resides on the other side of that fence. Newcastle were already 3-1 down when the centre-half was substituted after just 18 minutes. He had been embarrassed by Benjani Mwaruwari, but it was only when John Utaka bullied him to score Portsmouth’s third that Allardyce had seen enough. Not even 427 pints of wine can rid him of the memory.

John Terry
Ah, we’d almost banished it from our minds.