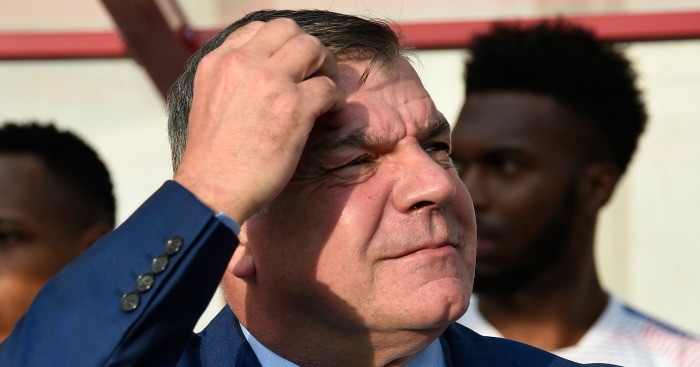 Sam Allardyce will attend an emergency meeting with the Football Association in which his job is on the line.

Allardyce’s position at the England helm is under scrutiny as the Football Association awaits further details of secretly-filmed conversations which appear to show the recently-appointed manager making a variety of controversial comments to undercover reporters.

An embarrassing Euro 2016 exit at the last-16 juncture to Iceland led to Roy Hodgson and his coaching staff’s immediate departure, with Allardyce announced as successor in July.

However, just 67 days after being appointed, the 61-year-old’s role is in question after the Daily Telegraph’s investigations team secretly filmed him.

Press Association Sport understands the FA has asked the newspaper for the full facts and is awaiting a response. The governing body will assess the situation on Tuesday and see where to go next.

Allardyce was recorded during a 10-month investigation that the newspaper claims “separately unearthed widespread evidence of bribery and corruption in British football”.

The Telegraph’s video appears to show the England manager telling a fictitious businessesman how to circumvent FA third-party ownership laws and negotiate a £400,000 deal to address investors in a Far East firm.

He was captured appearing to tell reporters that it was “not a problem” getting around FA rules which stop third parties “owning” football players’ economic rights.

The controversial practice was banned by the FA in 2008 over concerns it compromised the integrity of the game, as the third party could profit whenever a player was sold.

When asked about the rules, Allardyce was filmed on a hidden camera apparently saying: “It’s not a problem.”

He added an unnamed group had been “doing it for years” and “you can still get around it”, suggesting they employ the player’s agents to compensate for the fact they are no longer allowed to profit from each transfer directly.

He added: “You get a percentage of the player’s agent’s fee that the agent pays to you, the company, because he’s done that new deal at the club again or they sell him on, and you’re not getting a part of the transfer fee any more, because you can’t do that.

“But, you get – because of the size of the contracts now, the contract will be worth 30, 40million, at 10 per cent and you’ve done a deal with the agent where you’re getting five per cent of the agent’s fee, which is massive for doing about two hours’ work.”

The meeting with reporters also saw Allardyce appear to be filmed questioning predecessor Hodgson’s decision at Euro 2016, at times calling him “Woy” – a word used in a headline in 2012 that the FA called “unacceptable” and relating to Hodgson’s rhotacism.

On his employers, the FA, the video seems to show the England boss saying: “They’re all about making money aren’t they? You know the FA’s the richest football association in the world?”

He qualified that by saying the governing body is not the richest as “they stupidly spent £870million on Wembley, so they are still paying that debt off”.

2) the embarrassing, unguarded comments regarding Roy, Neville, players' weaknesses, Wembley, etc…(could have been a lot worse)

Will he keep his job? Much depends on how he explains himself to his FA bosses today but feels in the balance.