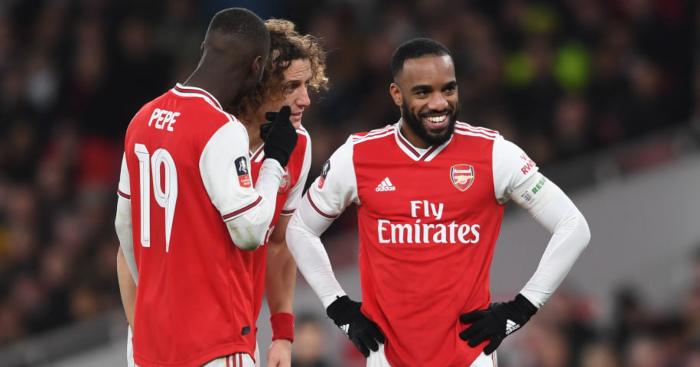 The Sun reported on Thursday that the Arsenal quartet had broken rules imposed by government over the coronavirus outbreak with Pepe ‘filmed having a kickabout with a dozen pals’.

Luiz and Xhaka had a ‘get-together on parkland’ while Lacazette was ‘snapped standing next to a car valeter cleaning his Audi on his driveway’.

FEATURE: Cashing in? Every Premier League club’s most valuable asset

A spokesperson for Arsenal told The Sun: “Thank you for bringing this to our attention. We’ll be speaking to our players.

“We were concerned so we have spoken to Nicolas who shares a house with a number of relatives who were involved in this game.

“We have reminded him of the importance of everyone following the guidelines.”

O’Hara told talkSPORT: “It’s just stupid isn’t it. Footballers are under so much scrutiny at the minute and everyone’s looking for a story because there is no content around, so anything they put up… I mean, why would you put on Instagram that you are training together and going to the park?

“It’s really immature from them, and people are still dying.

“You can see the papers are just crying out for a story now, and if you are going to give them one it WILL be used – and it’s going to be everywhere.

“These guys have got beautiful homes and they are on a lot of money; just train at home! You don’t need to see your mate in a park in a field.

“Just stay home and stay safe! That’s the whole point of this.

“Keep the pressure off the NHS!

“They are just flouting the rules and it’s immature of them.”