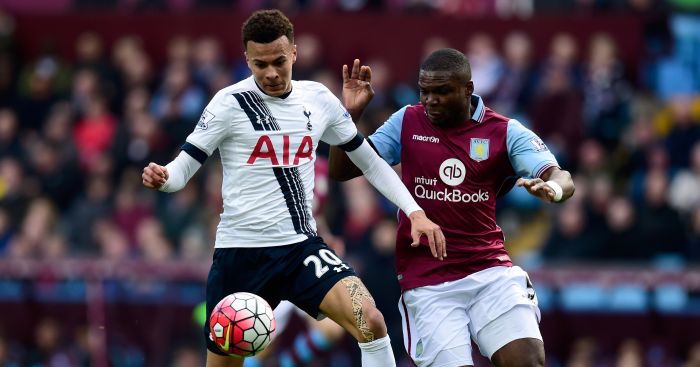 The Denmark international is training with the under-21s after Black said he refused to be on the bench for the 2-1 defeat to Bournemouth earlier this month.

But Okore took to Twitter to claim there was more to his omission than Black, who replaced Remi Garde last month, had suggested.

“There must be more to it then MR. Eric Black is telling you!”

Black had previously said Okore told him he did not want to play for Villa after failing to make the starting XI against the Cherries.

“It wasn’t a disagreement. I spoke to Jores the week beginning the Bournemouth game and I thought he responded well and thought he trained extremely well,” he said.

“But once I named the XI on the Friday, Jores asked to see me and said that he didn’t want to be considered to be on the bench, which I found surprising.

“I withdrew him from the squad. I met him again on the Monday. He said he didn’t want to be considered for any of the games going forwards.”

Okore’s banishment came after club captain Gabby Agbonlahor was suspended by the club as they investigate alleged laughing gas use on the night they were relegated from the Barclays Premier League.

Bottom club Villa were relegated from the top flight for the first time since 1987 earlier this month and lost 4-2 at home to Southampton on Saturday.

Meanwhile, Black believes injured left-back Jordan Amavi will be fit for the start of next season after he damaged his cruciate knee ligament in November.

“It’s not easy, it’s a difficult injury, but we’re pleased with how he’s getting on,” he told the club’s official site.

“Jordan has started his career very well. He’s a quality footballer – no doubt about it. Hopefully he will be ready to go next season.”