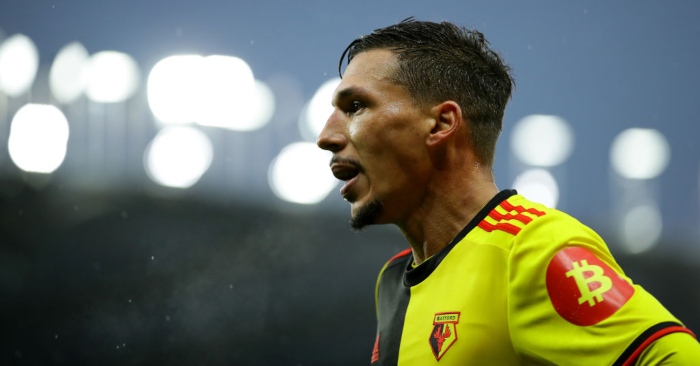 What’s in a name? Our Old Folks XI left-back has two names, one on the squad list and a different one on his shirt. He’s a rarity in modern football: he didn’t start his first-team professional career until the advanced age of 23. But he’s made up for lost time, playing in four different countries, with plenty of Champions League and Europa League experience on the ledger. He’s started in an FA Cup final, and is the (maybe) proud co-holder of a Premier League record. He’s amassed 38 international caps, including two starts in the European Championship and four in the World Cup. Most impressive of all, at 35 he’s the oldest outfield player in our XI. It’s time to learn more about…

José Holebas has played more league matches for Watford than for any other club. Which is odd, because in the summer of 2015, when he was transferred from Roma, he made it quite clear he’d rather have stayed where he was. In fact, when contacted about the transfer, he denied that it had even happened. (He’d been on holiday in Dubai, which is an object lesson in something or other.)

Rome might have been preferable to just outside London, if only for the weather. Even more so because Holebas, to the surprise of many, had supplanted Ashley Cole at left-back at Roma and made five appearances in the Champions League that season. The side also finished second in Serie A, so there were Champions League prospects in the future as well. Holebas’ comments at the time suggested that Watford might have been a tiny step down. Now in his fifth season with the Hornets, with over 120 appearances in all competitions, it’s where he clearly belongs.

At the moment, though, his place at Vicarage Road is under threat. He was clear first choice for the first four months of the season, but missed December with a rib injury, and although he’s been fit the last few weeks, Adam Masina has started for Nigel Pearson. The big Moroccan/Italian has played well, and appears to have the spot for the foreseeable future, with Holebas on FA Cup duty as long as it lasts.

But even if we’re fudging the rules a bit to include Holebas, he’s a fascinating figure, and most worthy of further examination. (Read: I’m not going to waste all that research.)

He was destined to multinational experience from the beginning. Born in Germany, Uruguayan mother, Greek father, a middle name of Lloyd (!). He began his career in the lower reaches of the German pyramid, bouncing around various amateur clubs. Whatever progress he might have made was abruptly halted by having to support a young family, and he left football altogether for a while.

It was in 2006, at the age of 22, that he was given a trial by 1860 Munich, the famous old Lions, then in the Bundesliga 2. He slowly worked his way up from the reserve team, playing sometimes at left wing but mostly at centre-forward. Finally, in the 2009/10 season, he landed a regular spot in the first team, having been moved to left-back by manager Ewald Lienen.

We mention Lienen’s name because Holebas has a history of, shall we say, disapproving of certain managers. Examples include Quique Sánchez Flores (“He wanted robots who say ‘yes’ and that’s it. You couldn’t say your opinion”) and the Greece national team coach Michael Skibbe (“The decisions he makes about the players are not made on the basis of their performance”). After all, this is a guy who has ‘Trust Nobody’ tattooed on his chest. That’s actually true.

But Holebas also has a history of genuine loyalty. In successive years when 1860 Munich were in danger of relegation, he sent a heartfelt video message and Facebook post in support. As for Ewald Lienen, he must have been one of the good guys; when he moved to Olympiakos in the summer of 2010, Holebas went with him.

But this is football, and Lienen was sacked after two months. For his part, Holebas stayed four years, scooping up four league titles and two Greek Cups, and became a regular for Greece, competing at Euro 2012 and the 2014 World Cup.

By the way, the Greece connection explains his two different names. The name on his Greek passport is Ιωσήφ Χολέβας, which transliterates as Josif Cholevas. So he’s Cholevas on the back of the shirt and Holebas on the official squad list, and everyone seems happy enough with a double identity.

At Brazil 2014 he impressed with his attacking verve. In the crucial group match with Côte D’Ivoire he hit the crossbar, won a free-kick with a fine solo run, and in stoppage time provided the cutback which led to the deciding penalty. In the Round of 16 match with Costa Rica, only a brilliant save by Keylor Navas kept him from an assist on an inch-perfect cross. He was entrusted with one of the spot-kicks in the penalty shootout, and buried it.

Greece went out, but Holebas’ performances earned him the move to Roma. He had a three-year contract, and wasn’t the only one surprised when the move to Watford came only a year later. After a difficult season under Flores, he earned the starting spot under Walter Mazzarri, and here we are.

Holebas has always been a stylish player, with smooth ball skills and a rare economy of movement. On balance he’s been an average defender, but his attacking skills and set-piece deliveries have more than compensated. A career total of 52 assists tells its own tale. Last year (and remember he was 34) he had six assists for Watford, plus three goals, two of them quite glorious.

Oh, and here’s the spot for a stat which by any standard is astonishing. Holebas’ first recorded matches come from 2006/07, during his time with the 1860 reserves. His first goal for the Little Lions happened to come in a losing effort. Since then, he’s scored 35 goals, NONE of which have been in losing matches. When Holebas scores, the team never loses. His points/match in such games are 2.51, better than Sergio Aguero and Neymar, better than Thierry Henry for his career, just a little behind Luis Suárez and Mo Salah.

Is there anything to explain this? It helped that he played for a dominant Olympiakos side, but even so the numbers are off the scale. Possibly a statistical fluke, but also quite possibly something in his attitude. I urge you to listen to his interview before last year’s FA Cup semifinal:

…and his spontaneous responses to some fan tweets…

What obviously isn’t a fluke is Holebas’ Premier League co-record: 14 yellow cards in a season, set in 2016/17. From the start he’s been a referee’s dream. We’re now up to 92 total bookings, including three straight reds. He has the highest career cards/game ratio of any current Premier League player (Harry Arter’s on loan in the Championship).

If you watched the interview videos, you know the cards don’t seem to bother him at all. If you didn’t, here’s another quote on the matter: “If I have to take the yellow card, I’m taking it, if I’ve got 20, I’ve got 20, what’s the problem? It’s part of the game to get a yellow card.” I’m absolutely not going to argue with him.

Holebas’ career is worth honouring: he’s been an effective performer, the sort we call ‘useful’ and mean as a sincere compliment. But he’s near the end, and the question is whether Watford can use him now. Given Holebas’ history, that might turn on how he relates to Nigel Pearson. He doesn’t strike me as the kind who wants advice, but I hope someone tells him not to mention large flightless birds. If so, he might yet contribute to keeping Watford up, which would be a fine cap to an eventful footballing journey.