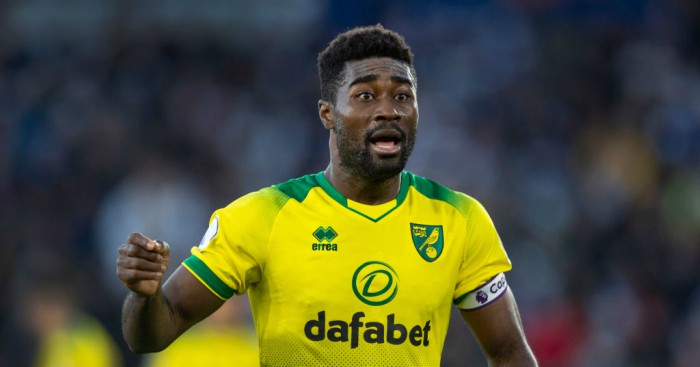 Our Old Folks XI defensive midfielder’s nickname is ‘Granddad’ and he’s old enough to have played in the UEFA Cup, and even the UEFA Intertoto Cup. He has Europa League and Champions League experience as well. He’s played at least three years in each of three different countries, and is now in his eighth season in England. He’s been relegated and promoted twice, won first division and second division titles, and shone in a Wembley final.

On the international side, he’s picked up 34 caps and scored three goals in competitive fixtures. He’s not a household name, but 439 matches in all competitions says he’s a valuable one. And he might be the only player in the whole history of English football to – no, we’ll save that for the end. He’s…

Alex Tettey was born in a very hot country and at 12 moved to a very cold country. A switch from Ghana to Norway would be a bit of a shock for anyone, and it says a lot for Tettey that he had no trouble at all excelling early in his polar surroundings. By the time he was 17 he’d been spotted and signed by perennial power Rosenborg, and in the next few years played at all youth levels for his adopted country.

In those days he played farther forward, and you can get a taste of his skills right here:

Rosenborg won plenty of Tippeligaen titles in those days, competing in the Champions League on a regular basis. So before he was 20, Tettey found himself playing against none other than Real Madrid. Later on he featured against Chelsea, Valencia and Schalke among others.

Rosenborg weren’t strong enough to progress against such opposition, but Tettey caught the eye, and in 2009 was signed by Rennes as a replacement for Stephane Mbia (remember him from QPR?), who would go on to achieve success with Marseille and Sevilla. In Tettey’s three years with the Rouge et Noir the club regularly finished in the top half and did well in the domestic cups. He struggled with injuries during his stay, but when healthy was almost always first choice, sometimes in defensive midfield, sometimes central midfield. He also helped Rennes qualify for the Europa League, with their notable result a home draw with eventual champions Atlético Madrid.

And so to England. He signed for Norwich City in August of 2012, and by October had the starting spot. (It helped that he’d scored the winner in his very first match, a League Cup tie with Doncaster Rovers.) Seven years on, at 33, he remains first choice and a frequent captain of the side.

The Canaries have been a yo-yo club in the last decade or so, and it’s Tettey’s experience in the ups and downs that makes him such a valuable figure. His previous contract ended in 2018, and at the time he assumed he’d be moving on. But his technical skills and good passing were a natural fit for a Daniel Farke side, and the manager also wanted him as an elder statesman as the club fought for promotion. The following autumn Farke publicly praised Tettey as a veteran who never stopped working to improve his game. When the season ended, Norwich had finished top of the Championship.

It was Tettey’s second promotion. He’d gone up with the Canaries back in 2015 under Alex Neil, and under considerably more pressurised circumstances. How about a play-off two-leg semifinal Old Farm Derby, followed by a Wembley all-or-nothing against Middlesbrough? Tettey played every minute, hit the post in the first leg against Ipswich, and was superb against Boro as City successfully defended an early two-goal lead. That’s why you keep an old man around.

Defence is Tettey’s primary remit, and over the years he’s shown himself a tough and precise tackler. Under Farke, who plays a front foot passing game, his stats have been less impressive. But before then his tackle percentages were outstanding, including world-class seasons of 81.9% and 79.7%. He’s been unafraid to take a booking – he once hit double figures three straight years with Norwich City – but knows how to stay controlled. In his long career he’s never been sent off, not once, neither straight red nor double yellow.

As for goals, in his early days with Rosenborg he was quite a threat, and for Norwich he’s tallied seven, two of which live long in the memory. One came at Old Trafford in 2015, in a famous Canaries victory, where he won the ball from Wayne Rooney, started the attacking move, then stormed forward and finished clinically.

The other – well, that was something extra special. I remember the match very well: it was in the crunch period of the 2013/14 season, a relegation six-pointer against Sunderland. Chris Hughton was the manager then, and for the whole of the season had played it characteristically conservative, to fans’ considerable agitation.

But for some reason that day he let the team loose, and they blew the doors off the opposition. Afterwards Sunderland manager Gus Poyet frankly confessed that he hadn’t expected it. And no one could have expected this:

That’s the way we score them in our dreams. It wasn’t a complete fluke, either: here’s Tettey scoring on a gorgeous half-volley on the weaker foot to give Norway the lead against Italy in a Euro qualifier:

Norway lost that match and failed to qualify, and shortly after the wonder goal against Sunderland, Hughton was sacked and the team went down anyway. It looks like relegation again this season, and over the years Tettey has certainly had his share of disappointment. But there have been plenty of triumphs too: the Rosenborg titles, Europa League qualification with Rennes, the two promotions with City, the captaincy.

Tettey’s current contract expires at season’s end, and again he’s been quoted wondering if it’ll be his last at Norwich. But if they do go down, he’d be more than adequate in the Championship, and his work so far this season shows he’s still physically fit. I wouldn’t bet against another year or two from Granddad.

And now for the big reveal. We mentioned that when young, Tettey moved from tropical Ghana to cold, cold Norway. On the occasion of his 200th match for Norwich City, the club posted a short video interview. When asked his favourite thing about Norfolk, he thought for a few moments, then replied “the weather”, making him quite possibly the only player in English football history ever to make that statement.

And yes, I know it’s Norfolk, where it’s drier than most, but if you can find another England-based footballer quoted on this big, big Internet saying his favourite thing is the weather, I’ll tip my hat to you.

In any case, let’s now all tip our hat to Alexander Tettey, the Ghanaian-Norwegian who’s happy in Norfolk. And let’s hope he stays.