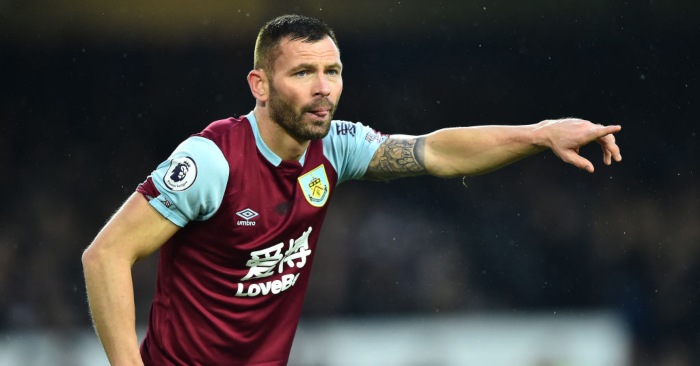 We started our Old Folks XI with keeper Ben Foster, and move now to the league’s oldest regular right-back. As a local boy, he joined the Manchester United academy at the age of nine. He’s started two Champions League matches and four in the Europa League. He’s played for five Premier League clubs, with 287 appearances to his credit. He’s been capped 13 times by his country, including a Euro qualifier where he assisted the winning goal. Although he’s been sent off a few times for a second yellow, he’s never seen a straight red card on the pitch. Surely we can’t be talking about…

Phil Bardsley was signed by Sean Dyche from Stoke City. That says it all, really. Stoke, Burnley, Dyche – we’re talking about a proper football player. If you go to YouTube and type in ‘phil bardsley’, the first video you get is ‘Wayne Rooney KO by Phil Bardsley Boxing in the Kitchen’. Not far behind is Marcus Rashford getting sent off for a headbutt after a Bardsley provocation. I mean, who else could receive a four-match ban for a stamp on JUAN MATA?

That’s not the whole story, obviously. There’s no doubt Bardsley can be confrontational, and a little agricultural in his challenges. You don’t want to look at the video of his tackle on Steven Pienaar. But he can play real football too, or he wouldn’t still be around.

Cases in point: two years ago, in his first season with Burnley, he made F365’s team of the week twice, for excellent defensive performances against Brighton and Huddersfield. That year he started 13 games, and last year upped it to 19. Now, at the age of 34, he’s fully supplanted Matthew Lowton as the Clarets’ regular right-back. He’s started nine of the last ten matches, and amazingly needed no rest through the holiday fixtures.

If you caught Burnley’s recent match against Manchester United, you saw what he can still do. Bardsley virtually neutralised Rashford by playing him onto his weaker foot and tracking him inside. He added nifty tackles on Brandon Williams and Andreas Pereira, and delivered a textbook goal-line clearance from an Anthony Martial shot. He was even useful in attack: two dangerous crosses and a would-be equaliser that drew an outstanding save from David De Gea. Burnley’s man of the match, no question.

That kind of leaves out the yellow he got for scything down Williams, of course. It’s been a part of his game from the beginning. In 2008/09, his first full season as a league regular, he was carded 11 times, just one behind leader Marouane Fellaini. The next year he had only eight, but was top in the league in yellows per 90, just ahead of teammate and fellow hard man Lee Cattermole.

That name will tell you where he made his big splash: at Sunderland. After loans to no fewer than five different clubs while on United’s books (including 13 starts at Aston Villa in 2007), he was finally dispatched north-east, and it made his career. He spent six seasons on Wearside, and is still fondly remembered as an old-school, no-nonsense full-back, plus an inspirational bad boy second only to captain Cattermole.

Bardsley even won the club’s Player of the Year award in 2010/11, and he did it the hard way, playing most of the season at left-back, not his natural position. But nothing could be more natural than getting the gong under Steve Bruce. It won’t exactly shock you that Bardsley names him as his favourite manager.

(And by the way, although he did get that four-match ban for the stamp on Mata, the foul was missed by the ref and only picked up on the TV replay. He went unpunished during the match, and retains his rather fortunate record of never receiving a straight red on the pitch.)

My own memorable Bardsley moment comes from his Sunderland days, in a November 2013 match against Manchester City. He was playing left-back that day as well, and out of nowhere he raced forward, got past his defender, took a long pass, put the ball on his right foot and coolly curled it past the keeper. Watching the match live on TV, I distinctly remember thinking “Was that actually Phil Bardsley?” Slap a number 7 on his back and it could have been Raheem Sterling.

Very few full-backs are prolific scorers, and Bardsley (seven in the league, all for Sunderland) is no exception. But you might be surprised at some of his goal-scoring feats. For example, he has three direct free-kick goals to his account: one for Rangers while playing on loan in Scotland, one for Sunderland in league play, and one for Stoke City in the League Cup.

Moreover, he has the knack for scoring important goals. The 2013 strike against Manchester City was the only goal of the match. The Stoke free-kick clinched the Potters’ 2015 quarter-final against Sheffield Wednesday, sending them to a semi-final tie with Liverpool. And his most celebrated effort came in 2014 in the 119th minute of a League Cup semi-final at Old Trafford, in a thrilling tie that Sunderland eventually won on penalties.

Yes, De Gea should have stopped it.

Assists are another matter. Bardsley’s primarily a defender, but you’d expect a full-back with 287 Premier League appearances to have more than four career assists. Trent Alexander-Arnold gets that many by lunchtime. Yet in October 2011, in a crucial Euro 2012 qualifying match for Scotland at Liechtenstein, it was Bardsley (under the cross of St. Andrew through a Glaswegian father) who surprised the defence with a quick free-kick for Craig Mackail-Smith to head home. Here’s a properly grainy video to prove it.

Back to Sunderland, where in 2013 Bardsley was also notable for falling afoul of manager Paolo Di Canio – not that that was particularly hard. Most notoriously he 1) was photographed on the floor of a casino covered in £50 notes (“I completely f***ed up”) and 2) while sidelined with a broken foot, ridiculed Sunderland’s opening-day loss under Di Canio in an Instagram post (“It was a serious error of judgment”).

All good things must come to an end, though, and the famous League Cup run in 2013/14 was Bardsley’s last hurrah on Wearside. Out of contract, he was signed by Mark Hughes (another proper football man), and spent three years in the Potteries, first as a regular and then primarily as a squad player. Then it was on to Turf Moor, and his remarkable late florescence.

How good is the 2019/20 version of Phil Bardsley? He does seem to have slowed down a little, and looks to be playing things more conservatively. On the plus side, that means his best tackle percentage ever, and his lowest cards per 90 in some time. On the other hand, at times he sits off his man too much, and gets into trouble accordingly. Last week he struggled badly against Jack Grealish. But he’s hardly the only one to do so, and the United match the previous week showed he can still rise to the occasion and challenge.

He’ll get another chance to rise this weekend, as Burnley travel to Stamford Bridge. He’s most likely to be up against Christian Pulisic, 21 and full of running. When the teams met at Turf Moor in October, Pulisic merely got a perfect hat-trick. Ah, but that was with Lowton in the line-up. Can you imagine Phil Bardsley humiliated by a rookie, an American no less? I can’t. Maybe we’ll see a bit of the wily veteran, maybe a bit of the hard old man. A proper football match-up, number 288 in a proper career.