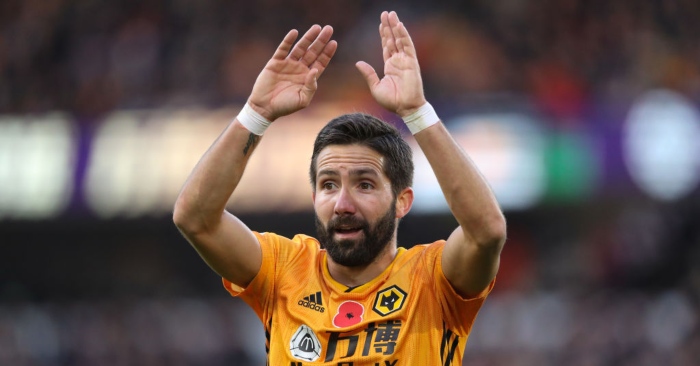 Our central midfielder is the only member of the Old Folks XI to have won a major international final. That match was just one of 121 he’s played for his country, the first coming at the age of 18. Those international caps include 15 at European Championships and six at World Cups. He’s a Europa League winner and a Champions League semi-finalist, with a mere 130 appearances in European club competitions. He’s won league titles in two different countries plus three domestic cups. Now he’s come to England in the twilight of his career to show us how to play this game. He wears old gold, and he’s the olden and golden…

João Moutinho’s career has been so long and distinguished, and he’s been so outstanding for Wolves, that it’s surprising to find the majority of his club matches have still been played in his native Portugal. He’d been an accomplished performer at home for nine years before crossing the border. Even then, instead of going to a contending team in Serie A or the Bundesliga, he went to a club that had just been promoted to Ligue 1.

But this was no ordinary promoted club. It was Monaco FC and president Dmitry Rybolovlev, who had a few hundred millions in a jar on his nightstand, thought it would be a nice idea to contend for a title or something. So Moutinho was part of the summer 2013 spending spree that also brought in Radamel Falcão and a young James Rodriguez.

It was an inspired choice on both sides. In Moutinho’s five seasons in the principality, first under Claudio Ranieri and then Leonardo Jardim, Monaco were brilliant. They never finished lower than third in Ligue 1, and joyously outpointed big bad PSG for the title in 2016/17. In his second year, they made it to the Champions League quarter-finals, and two years later to the semi-finals. Even better, they became known more for young talent than big-money signings: Anthony Martial, Bernardo Silva, Kylian Mbappé, Fabinho and the list goes on and on.

But with all the kids in the house, the club needed a steady veteran hand, and that was Moutinho. Jardim saw him as tutor to the raw talent, and his teammates unanimously regarded him as a leader in the dressing room and on the pitch. He played 219 matches in all competitions for Monaco, always a steady, intelligent, superbly skilled presence in midfield.

His leadership qualities were evident at a very early age, when he became captain of his boyhood club Sporting at only 20. There he generally played a more attacking role, scoring more than half his career goals in his six years with the Lions. He played in the UEFA Cup final in 2004/05, the first of six straight seasons for Sporting in European competition. His side also won the Taça de Portugal twice.

But there were considerable frustrations as well. During his stay, Sporting finished second in the league four straight times to Porto, missing by only a point in 2006/7. Eventually Moutinho must have figured “if you can’t beat ‘em, join ‘em”, because he moved north to the champions in summer 2010.

Pandemonium. Just try to imagine it – think maybe Steven Gerrard moving to Manchester United. The Sporting president called him a ‘rotten apple,’ and when Porto visited Sporting the next season, the home fans actually hurled rotten apples onto the pitch.

Moutinho was mercilessly abused the entire match, but answered the only way he could by playing a key part in Porto’s equaliser. And if he who laughs last, laughs best, Moutinho was very happy at the end of the season. Under André Villas-Boas, Porto were invincibles in the league, and won the treble that year: league, cup, Europa League.

It was in the cup that he scored perhaps his most famous goal. In the second leg of the semi-finals against Benfica, Porto were playing away, down 0-2 on aggregate, destined to elimination, when in the 64th minute Moutinho struck. In the next 10 minutes Hulk and Falcão followed with goals of their own, and Porto went through against all the odds.

That season earned Villas-Boas a move to Chelsea. In fact, for many years Moutinho was expected to move to England himself: in 2008 he was strongly linked to Everton and in 2012 to Spurs. He’d always said he wanted to play in the Premier League. But it never happened, although two more league titles at Porto – including another invincible season – must have been reasonable consolation.

As for his international career, the climax of course was the European Championship in 2016. It was an odd tournament for him – he’d been unimpressive in the group stages, and didn’t start a single match in the knockout rounds. But he was there at the death in the quarter-final against Poland, converting his kick in the penalty shootout. He was also there in extra time in the final against France, playing a characteristically precise pass to Eder, who went on to finish brilliantly.

His best international tournament was his first, Euro 2012, when Portugal made it to the semi-finals and only went out to Spain on penalties. Here’s his run and perfect cross for Cristiano Ronaldo for the only goal of the quarter-final vs. the Czech Republic:

But the match for which I remember him best was one for which he’s been largely forgotten. It was in Stockholm, in the second leg of the play-off to qualify for the 2014 World Cup. Portugal had won the home leg 1-0, and they would win this one 3-2. It was a wonderfully open see-saw match, and Moutinho was impressive throughout – except he was slightly overshadowed by Ronaldo, who just happened to score all three Portugal goals. But take a look at the highlights, and watch Moutinho assist goals one and three, and start the attacking move for goal two:

On the whole, though, Moutinho has never been one for the highlights package. For most of his career he’s been less a creator than a controller, one who sees the whole pitch and makes the right pass. Now that he’s finally in the Premier League (thanks, Jorge Mendes), he has a manager who knows just what to do with him. Alongside Rubén Neves in front of the back four, looking to start the counter-attack, he’s been a revelation: poised, incisive, with awesome technique. He just oozes class. The fans voted him Player of the Year last season.

And in the oh-by-the-way-department, he’s a fantastic dead-ball artist. For Portugal he once scored two free-kicks in a single match; for Wolves he’s only scored one so far, but has an amazing 11 assists from free kicks and corners.

For all his skill and smarts, maybe the most remarkable thing about Moutinho is his durability. He’s never had a serious injury, and if I’ve done the math right, he’s averaged 46 club matches over the last 14 full seasons.

And for Wolves, beginning at the age of 31 and now at 33, the stats are simply unbelievable: 63 appearances in 63 league matches, 59 of them starts, 51 where he went 80 minutes or more. At one point this season he played the full 90 minutes in 19 straight games. He’s also played in all six Europa League matches, starting five, going the distance in four. How many midfielders have done the same at that age?

The good news is that he’ll be around a little while longer. This past November the club extended his contract to 2022. For any other player that would be a huge gamble, but this feels just like smart business. At that point he’ll be 35, even more of a golden oldie. And we’ve little doubt that the hits will keep on coming.