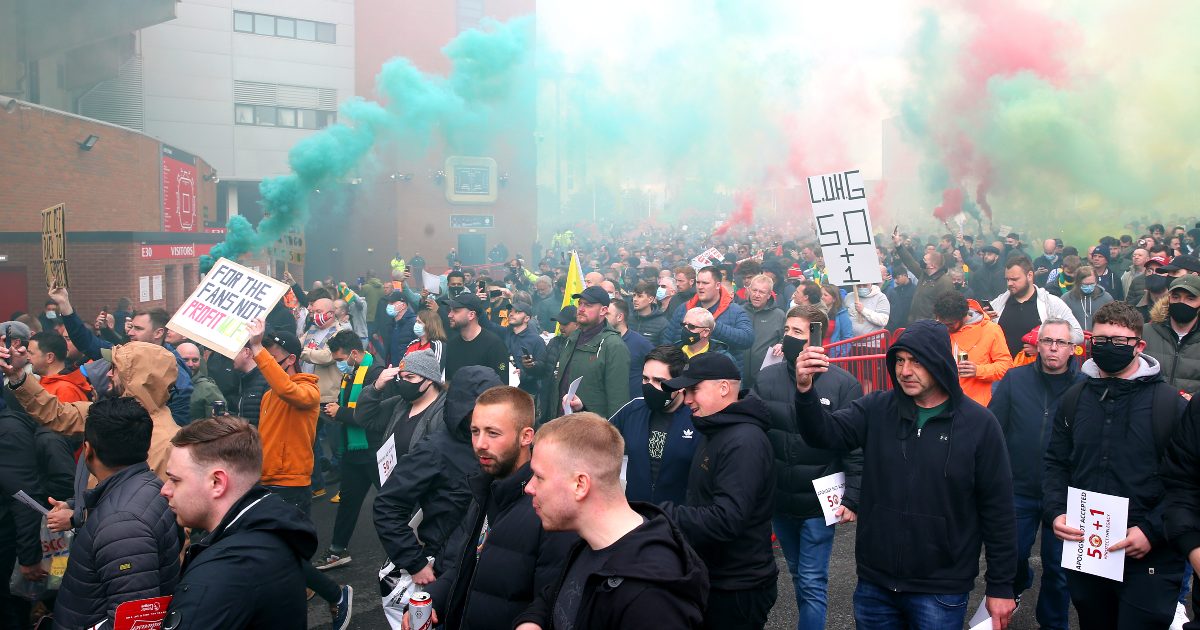 Thousands of fans are protesting at Old Trafford against the Glazer family and the kick-off of Manchester United vs Liverpool has been delayed as a result.

Ahead of Man United‘s game against Liverpool, a mass protest has taken place outside Old Trafford. A group of fans took to United’s team hotel before they made their way to the stadium.

BBC Sport reported that 200 supporters broke through barriers and found their way onto the playing surface.

The protests have continued over the past couple of hours and police have been in the stadium to shepherd the fans out of the ground.

The teams are yet to arrive at Old Trafford and just before 16:00, it was announced that the kick off had been delayed. The Premier League are yet to reveal a new start time for the game.

BREAKING: Angry Manchester United fans are staging a protest against the club's owners after getting inside their Old Trafford stadium.

BBC reporter Simon Stone has said: “Thousands of Manchester United fans began a protest against the club’s owners at Old Trafford this afternoon.

“Scores of green and gold flares – the colours of United’s first shirts when they were Newton Heath and the original anti-Glazer protests in 2010 – were set off at the start of the protest at 14:00BST.

“It is understood other protesters went to the team hotel ahead of Ole Gunnar Solskjaer’s side’s departure for this afternoon’s Premier League game against Liverpool. Hundreds of fans have been on the pitch and many are now exiting through gates across a road that normally allows the team buses through.

“No media are being allowed through the gates as normal until the situation is cleared.

“It is understood the Premier League, who have a compliance officer on site, do not belief there is an issue about the game going ahead from a purely coronavirus perspective as there was no admission to dressing rooms.

“Referee Michael Oliver and former United skipper Gary Neville were amongst those whose vehicles were surrounded as they entered the stadium.

“There was no trouble and both were allowed through amid a lot of anti-Glazer chanting.”

Chief BBC reporter Phil McNulty has added that media are currently “locked outside” the stadium:

“Members of the media are currently locked outside the as the gates of their usual entrances remain shut and the Old Trafford stadium is put on lockdown as thousands of Manchester United fans continue their protests against the owners.”

Some of the fans talked to Neville and Jamie Carragher inside the ground and the former Man United man said the protest “is the consequences of the owner’s actions two weeks ago”.

On the Premier League live blog, it is said that the safety of everyone at Old Trafford is paramount:

“After the security breach at Old Trafford we can confirm the Manchester United v Liverpool match will not kick off at 16:30 BST.

“The safety of everyone at Old Trafford is paramount.

“At present there is no revised kick-off time. We will update accordingly.