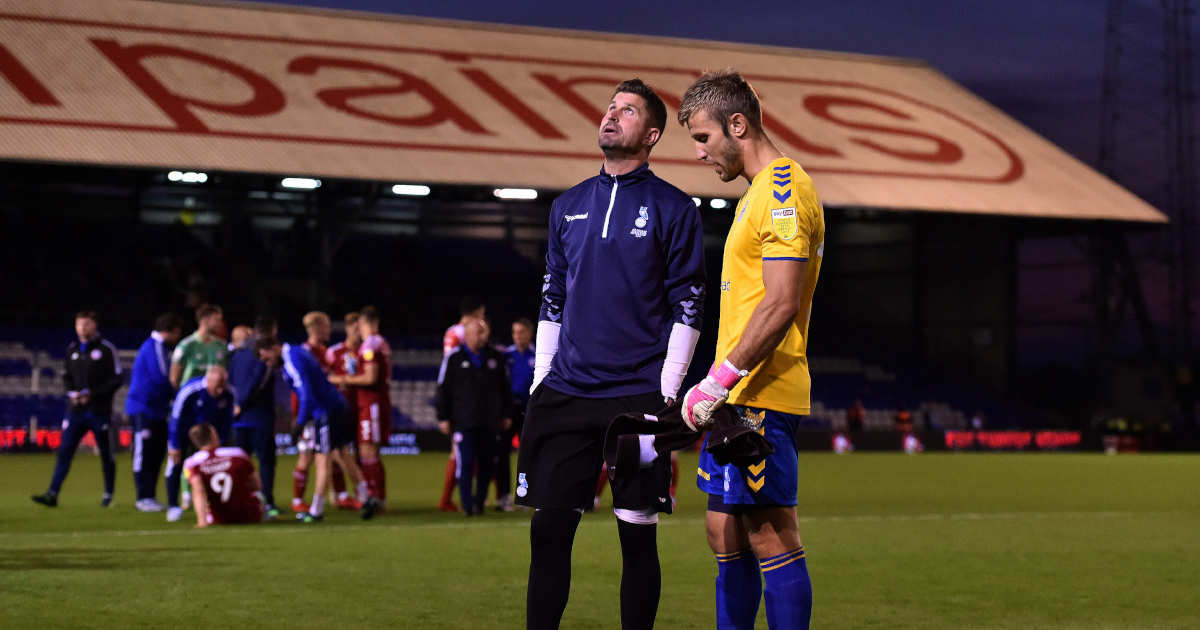 When the crowd invaded the pitch after 65 minutes of Saturday’s match between Oldham Athletic and Barrow, few watching would have been that surprised. This was, after all, the fifth time it had happened in a row. During their recent Carabao Cup win over Accrington Stanley, protesting supporters stopped play by throwing tennis balls and a flare onto the pitch. Against Barrow on Saturday, hundreds of fans blew whistles in unison from the stands, and the mid-game pitch invasion forced play to stop. Oldham supporters are desperate to get the owners out of their club before it’s too late to save but, as ever, the game’s actual governing bodies are nowhere to be seen.

Oldham Athletic are on course for an unwanted record. They are currently in 23rd place in League Two, with one win and five defeats from their six matches; they may only be that high because the only team below them, Sutton United, already have two games in hand. Should Oldham go down at the end of the season, they’ll become the first former Premier League club to be relegated into non-league football, just as the Premier League comes to celebrate its 30th anniversary. Considering the intransigence of the owners and the way in which Oldham have been run since they took charge, such a relegation could prove to be the death knell for the club.

In the 27 years since relegation from the Premier League in 1994, Oldham Athletic have finished above the halfway point in whichever division they’ve graced just six times, the last of which was a more than decade ago. The club has drifted down through the divisions with barely anyone noticing, and by the 2017/18 season they were fighting relegation into League Two. Owner Simon Corney had purchased the club in 2004 along with two others through a company called Press Bank Ltd, but the others both jumped ship in 2010, leaving Corney in sole charge. He finally reached agreement with the Lemsagam family to sell the club in January 2018 but stayed on at Boundary Park as chairman. But by the end of the 2017/18 season the Lemsagems ousted him, just as Oldham’s relegation was confirmed.

The intervening three-and-a-half years have seen little improvement. The Lemsagems have burned through nine managers in this time, while their three seasons in League Two have seen them finish in 14th, 19th and 18th place in the table.

The highest profile of these managers was the former Manchester United midfielder Paul Scholes. Scholes, a son of Oldham and a fan of the club, was appointed in February 2019 but lasted 31 days before quitting with just one win from his seven games in charge; he cited interference in team selection matters by Abdallah Lemsagem as the biggest reason for his departure.  This came despite Scholes having a clause written into his contract preventing such interference after one of his predecessors, Frank Bunn, was sacked by email five days after a blistering row with the brothers over exactly that.

His other comments, including the revelation that there was no hot water at times, did not paint a complimentary picture of the way in which Oldham were being run at the time. Abdallah, a former football agent, is largely an absentee lamdlord from Boundary Park these days, but his older brother Mohammed remains as Sporting Director, a position which continues to infuriate supporters.

Wages have been consistently paid late, and the club had close brushes with administration in 2020 over a loan from Brass Bank Ltd which had never been repaid, leading to a winding-up petition been brought against it. The story of club CEO Mark Moisley being summoned to a restaurant in London to be given a carrier bag containing £48,000 in used £20 notes to cover overdue wages has become a part of local folklore, and no-one believes the Lemsagems’ claims that this story is a fabrication.

As recently as the start of August, the club was named and shamed over a failure to pay £2812.38 to six workers in accordance with minimum wage laws. The last set of company accounts produced, covering the year to July 2020, only showed a modest loss but, when asked about these accounts by the Oldham Times, football finance expert Kieran Maguire criticised the club’s lack of transparency in its accounting practices.

This season has started very much as expected. Current manager – for now – Keith Curle has been fighting an uphill battle since his appointment, with the club under a transfer embargo, and it should come as no surprise to find that the rumour mill is already swirling about his future at the club. Few doubt that Curle has been operating with one hand tied behind his back since he took the job in March but, given the owners’ trigger-happy attitude with the managerial ejector seat since they took control of the club, few expect him to be there for much longer.

Following the events of last weekend and recent meetings with pressure group Push The Boundary and the Oldham Athletic Supporters Federation (the club’s supporters trust, which owns the 3% of shares in the club not owned by Lemsagem), the club made a public statement in which Lemsagem admitted that, “I have made many mistakes since I took over in 2018” and detailing how he hopes to rectify the fractures within the club.

But all too frequently the messages coming from the club are contradictory or otherwise mixed. If Abdallah Lemsagem’s statement was intended to be conciliatory, the message was somewhat diluted by other comments that sought to spread blame elsewhere. This extends beyond this individual statement. Two days prior to last Saturday’s match, and in the full knowledge of how febrile the atmosphere had been at previous matches this season, the club prohibited banners and flags from supporters group the Ultras Athleticos from being displayed. And following the release of Lemsagem’s attempt at reconciliation, the club issued a further statement suspending season ticket sales until further notice and sales of matchday tickets for the next two games. If the Lemsagems are trying to win over the hearts and minds of Oldham Athletic supporters, they’ve got a funny way of showing it.

The EFL has been nowhere to be seen over any of this. Their laissez-faire approach has been heavily criticised in recent years, but there have been no signs that anything much has changed despite the complete collapses of Bury and Macclesfield Town in 2019 and 2020. The League would argue that the internal affairs of one of its member clubs are none of its business, but when the interim findings of the Independent Fan Led Review of Football Governance were published in July, chair Tracey Crouch MP stated bluntly that “temporary custodians of a community asset come and go but fans are forever”. There seems to be nowhere in the governance of football in England in which this value is upheld.

As football’s governing bodies look the other way while yet another club withers on the vine, the need for an independent regulator has never been more apparent.