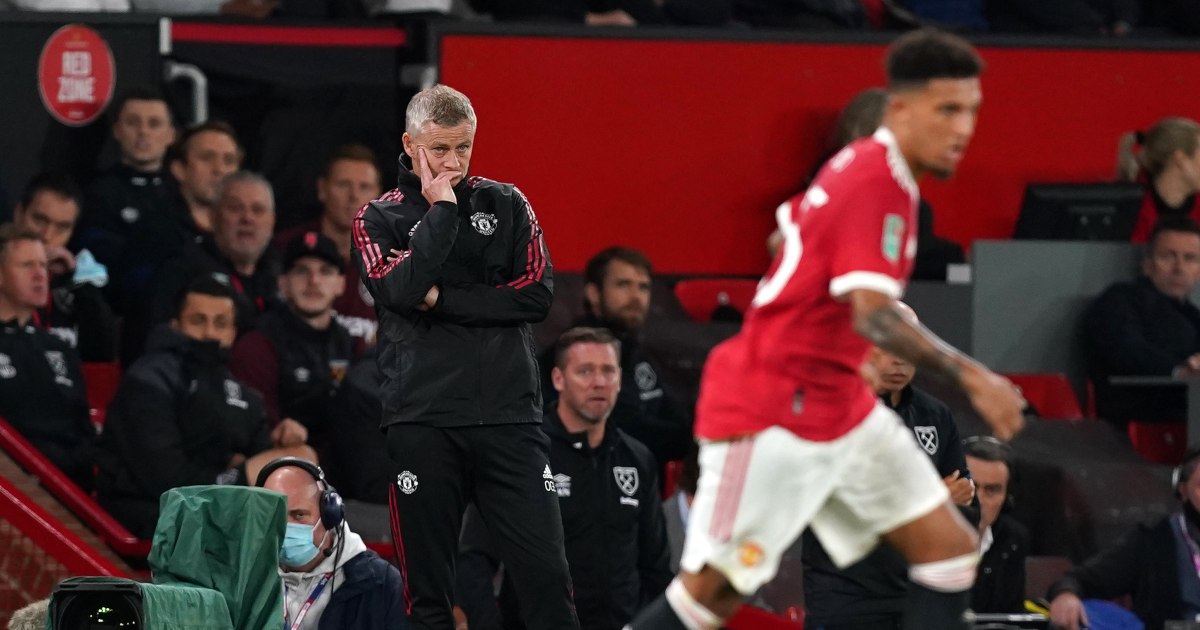 What could Ole Gunnar Solskjaer do? He even played Jadon Sancho in his favoured position…

Demanding to see the manager
Mediawatch could not help but snigger at a back page of The Sun that leads on Ole Gunnar Solskjaer ‘moaning’ and ‘fuming’ at a ‘trademark poor start by his side’ in their defeat to West Ham as if it was somebody else’s job to solve that long-standing problem. When he catches up with whoever is responsible, they’re going to get a hefty piece of his mind.

Let’s hear it for the Moyes
On the inside pages, Neil Custis chooses to venerate David Moyes rather than blame Ole Gunnar Solskjaer (of course), which gave us fond, warm memories of his piece on the Scot in the summer of his appointment at Old Trafford.

‘In my opinion, United made not only a brave choice but the right one.

‘During United’s pre-season tour, Moyes has looked and acted like a man made for this role.

‘It may have seemed odd seeing him in that Manchester United blazer at first, but it fits.’

It’s little wonder that Custis is now hailing this wonderful victory ‘at the club that unceremoniously sacked him after just ten months’ (in which he was found to be completely out of his depth).

In reserve
The Daily Mirror calling the clash ‘the battle of the second strings’ is a fantastic way of absolving Solskjaer of any responsibility. He literally named a full team of internationals, fellas.

Deja view
Over at the Daily Mail, they question the notion that Solskjaer needs to win a trophy at all.

‘There are many at Old Trafford who dispute that theory. They would argue that a season like the last one – runners-up in the league and a place in a European final – would beat, say, winning this trophy and falling flat in the Premier League, Champions League and FA Cup.’

A season like the last one? So are we now adjusting expectations to finishing 12 points behind the champions and losing to the seventh best team in Spain in the Europa League final after a summer outlay of £126m that included the return of one of the world’s best goalscorers ever?

That’s a whole lot of spending to stand still. The Ole Kool-Aid has been thirstily swigged.

Hint: When you are writing in the opening paragraph that ‘Ole Gunnar Solskjaer was reluctant to scrutinise Anthony Martial’s performance in Manchester United’s Carabao Cup defeat to West Ham’, it is a bit sodding cheeky to claim he has given any kind of verdict. He very pointedly didn’t.

‘Manchester United already had an answer to their £120m problem’

Mediawatch is not sure a problem becomes a ‘£120m problem’ just because you have spent £120m trying to solve it, but we bow to the overriding desire to get a large number in a headline.

In the article they argue that despite spending all that money, Mason Greenwood is still the best option on the right wing for Manchester United.

We might be inclined to agree if Sancho had actually played close to a full game for Manchester United on the right wing. So far he has started four matches; three have been on the left and the fourth was cut short by Aaron Wan-Bissaka’s red card.

But the MEP want us to believe that the left wing is actually Sancho’s favoured role.

‘Despite being signed to address the long-standing issue on the right side of attack Sancho started the match on the left, a positional change which would see him occupy the same role he enjoyed for Borussia Dortmund last season.’

Sancho started 24 Bundesliga games last season; nine of those were on the left wing. At best, his time was evenly split between the right and left wings.

‘Yet despite being shifted to his favoured role the England international struggled to make the impact which he would have hoped, a task made harder when West Ham were forced to replace second string right-back Ryan Fredericks with Vladimir Coufal early in the match.’

His ‘favoured role’? As far as we can tell from some cursory Google searches, he has never revealed his ‘favoured role’, but what we do know is that maybe actually trying him on the right wing for 90 minutes might be worth a shot.

Art attack
There is no man more miserable than Mark Irwin in football journalism; perhaps that’s the price you pay for being The Sun‘s Arsenal correspondent. This is the opening line to his Carabao Cup match report:

‘MIKEL ARTETA’S challenge to prove him wrong went unheeded as his nervous Gunners did just enough to make it through to the last 16.’

Trends**tters
The issue with relying too much on ‘trends’ to decide your editorial output is that it leads to the most ludicrous crowbarring.

‘Man Utd’ trending after their defeat to West Ham? Then why not write a piece about the battle between Aaron Ramsdale and Bernd Leno for the Arsenal goalkeeper shirt and magically make it about Man Utd? If you can throw in the word ‘transfer’, the word ‘problem’ and a very high number, then you are absolutely quids in. But my word, it is depressing.

Yes. We imagine he is sh*tting it.