Home All The News Solksjaer should be Maguire ‘father figure’, says Parlour

Should Solksjaer look to Wenger's ways in helping Maguire get over his current slump... 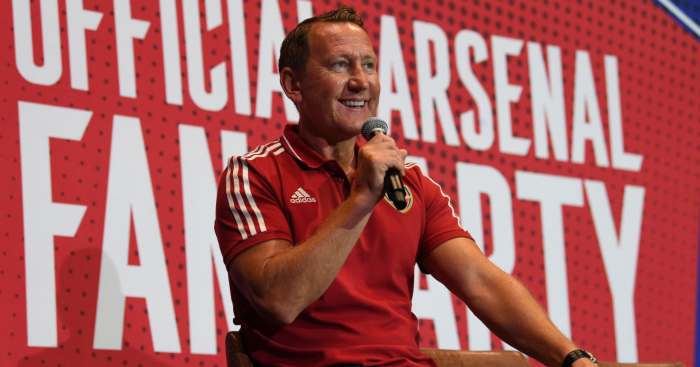 Ole Gunnar Solksjaer should use Arsene Wenger’s methods in helping Harry Maguire return to form, according to Ray Parlour.

Maguire is at the start of his second season at Old Trafford. He made the move from Leicester in August 2019 for a record-breaking £80m fee.

The England international has had an up-and-down stint at Man Utd so far. He has been the subject of regular criticism since signing for the Red Devils.

This has stepped up in recent months after he was arrested in August after an altercation with Greek police officers.

Meanwhile, he has started the season poorly for United. Solksjaer’s side have lost two out of their first three league games. Maguire was also sent off as England fell to a 1-0 Nations League defeat to Denmark at Wembley on Wednesday.

Arsenal legend Ray Parlour has advised Solksjaer to use of Wenger’s techniques to help Maguire. Speaking on Friday’s talkSPORT Breakfast, Parlour said having his manager treat him like a son, as Wenger would with his players, may just be what Maguire needs:

“Most players would go to the manager if you’ve got problems and Arsene was always very helpful. He’d always do the best for the player.

“It’s up to the manager to see in training, and I know they’ve been away on international duty, but if I was Ole Gunnar Solskjaer the first thing I’d do when he comes back to the club would be invite him to the office and have a chat with him.

“Get it out of him, ask him how he feels. Most players would say, ‘I’m ok boss’, but hopefully he would come out and open up a little bit to the manager, that’s what you want.

“A lot of the players at Arsenal used to treat Arsene Wenger like their Dad!

“Seriously, guys like Thierry Henry and Roberto Pires, they looked up to him so much and they felt that they would go up to him and ask him about anything.

“Not just about football, if they had problems at home, whatever, and he would always give them the best advice he could give.