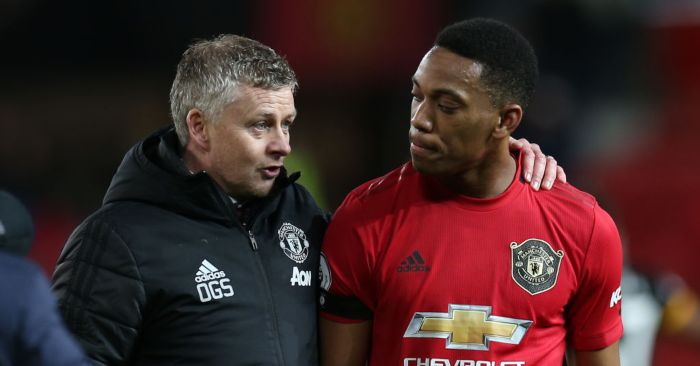 Ole Gunnar Solskjaer has used the struggles of Anthony Martial to show why Odion Ighalo can make a difference.

Ighalo joined United on deadline day in a loan move that will last the rest of the season.

Eyebrows were raised but there is an argument to be made in favour of the deal, with Solskjaer using the drab 0-0 draw with Wolves to explain the need for “a physical presence” to help Anthony Martial.

The manager was impressed with Bruno Fernandes’ debut but suggested his new teammates didn’t help him at times. Nor did Solskjaer’s selection…

“In the first half there wasn’t enough movement in front of him, everyone wanted ball in to feet,” the Norwegian said.

“We changed it a bit in the second half and created more opportunities but I don’t think any team deserved to win.”

Paul Ince was particularly disappointed with Martial, with Solskjaer issuing a defence of sorts.

“It’s not just his job. Anto was isolated. I felt sorry for him in the first half.

“In the second half Dan (James) stretched them. There was space for Juan (Mata), Andy (Pereira) and Mason. It’s hard when you don’t have runs in behind.

“It’s frustrating to be a striker. A physical presence in the box and we could’ve helped Anthony.”

Which is where Ighalo comes in.

“He’s a different type of striker – a proven goal-scorer, a physical presence.

“It gives us a chance to rest Mason and Anthony at times. We want to go far in the Europa League, FA Cup. It was important we have another type of striker to use.

“Marcus is out for a little while and with him back we’re a different team.”