Ole Gunnar Solskjaer might not be the greatest manager, but that was a good night... 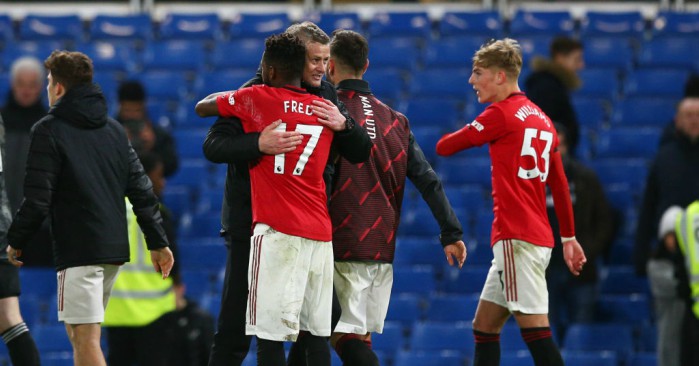 Chelsea were always likely to struggle. West Ham have won at Stamford Bridge this season, so too Bournemouth, and Frank Lampard’s team have an established type of performance that they give whenever they’re expected to win at home. Add in Manchester United’s counter-attack, which seems to perform even when they don’t, and this was going to be a night full of trouble.

It wasn’t quite that simple. Harry Maguire absolutely should have been sent off and Kurt Zouma’s goal possibly should have stood, but there were familiar themes and, once again, Chelsea showed all the limitations which have become habit under Lampard.

But it’s just too easy to dress their defeats in that costume. Similarly, it was tempting to watch this game’s broader patterns and conclude precisely nothing new about Ole Gunnar Solskjaer’s Manchester United. They’ve also given this performance before and it’s been a precursor to nothing; there’s always a Bournemouth, an Astana or a Burnley lurking around the corner, ready to puncture any momentum gained.

It’s possible to recognise that, to conclude that Solskjaer probably isn’t a long-term answer for United, but to also accept that Monday night was probably still good for his reputation. United were poor in the first half. They were inaccurate. Even Solskjaer described them as ‘cumbersome and slow’ and Anthony Martial’s header came at a time when Chelsea – probably – deserved to be in the lead.

But there was plenty that was good, too. Fred’s revival has been one of the lower key stories of the last few months and, quite rightly, he was Matt Stead’s Man of the Match in 16 Conclusions.

Monday night was his improvement distilled down to its essence. Fred has an intent which is rare among Manchester United midfielders. Fred wants the ball. He wants to do something with it. It’s a minor virtue, but it’s been enough to make him stand out.

His role in the Martial goal characterised that nicely. At the point at which Aaron Wan-Bissaka had the ball at his feet for the first time, the move would have died had Fred not made his forward run, first creating the angle for the one-two and then the opportunity for the cross.

Two caveats. First, Chelsea definitely allowed it to happen. Do they do any work at all on their defensive shape in training? Second, it’s really Fred’s job to make that kind of run. But it was still heartening to see that kind of life in the United midfield. It’s been a passive, reactive mass for much too long, full of players who only start to think about how they might affect the game once they receive possession. Fred’s active, arterial role in that move was a very welcome contrast.

It was also a passage of play which, at its end, showed an aggression that Martial too often lacks. What a conundrum he is. So talented, so obviously capable of being one of the finest forwards in the country, but yet so often underwhelming. He’s traditionally enjoyed his visits to Stamford Bridge in the past, so let’s proceed with caution, but it was still encouraging to see him attack that space in front of Andreas Christensen and behave with a centre-forward’s instinct.

It wasn’t a typical Martial goal, but he showed that it could be. He’s good in the air, he’s physical when he wants to be, and he has the anticipation to see that sort of chance at the near post. It’s not a Big Conclusion, more just a nice moment which doesn’t deserve to be seen solely through the prism of Chelsea’s limitations.

The same is true of the Luke Shaw/Brandon Williams axis down the left side. That worked well, certainly in the sense that it looks like a well-drilled, properly organised dynamic. The trick seems to be that – contrary to what the 3-5-1-1 formation suggests – Shaw didn’t really play as a centre-half and Williams wasn’t really a wing-back.

Instead, with and without the ball, it was more of a double full-back situation, allowing both players to remain in their comfort zone and do what they’re good at. Both players dropped, both pushed forward. They did get lucky, because without VAR’s intervention one of their few miscommunications would have cost them that Olivier Giroud goal, but they deserved their good fortune.

Whether Solskjaer was that area’s sole architect, it was an approach which he approved, and its success challenged the notion that United just pack the box and counter in these games. There’s thought to these performances, also some smart design. So file it alongside the other micro-observations – Bruno Fernandes’ corners, Wan-Bissaka’s improved attacking contribution, and the dividend from starting Eric Bailly – as praise which shouldn’t be lost within the broader concerns.

This was a good night. It may not have been instructive and it probably didn’t answer any of the more pertinent questions about Solskjaer’s Manchester United, but it was a fine result and – by full-time – had become a thoroughly deserved win.