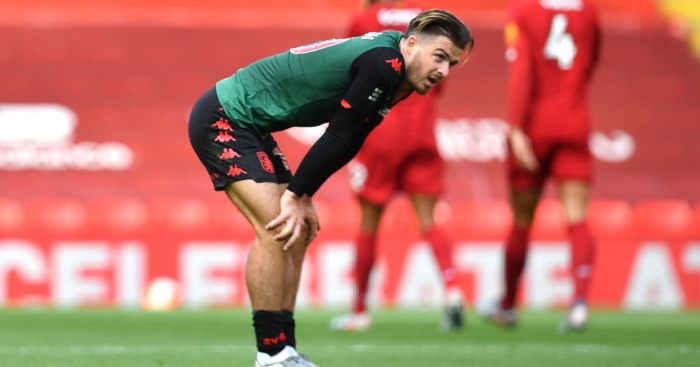 Ole Gunnar Solskjaer is wary of the threat posed by reported Man Utd target Jack Grealish when his side travel to Aston Villa.

The 24-year-old stole the show when the sides met in December, with the skipper scoring the opener and presenting all manner of problems in the 2-2 draw at Old Trafford.

Grealish will be desperate to kickstart boyhood club Villa’s survival hopes as United visit on Thursday, when there is also the chance to impress Solskjaer as summer talk rumbles on.

“I think the last game obviously they caused us some problems, both Grealish off left and (Anwar) El Ghazi off the right,” the United boss said.

“He scored a fantastic goal. There’s been lots said and talked about him and we need to be aware of him.

“Whoever is close to him, if he’s off the left, in the middle middle, on the right.

“What he does is attract players to him and create space for others, so there’s not just one player in that Villa team. There’s many of them.”

Joining Grealish as the subject of widespread speculation this week has been Bournemouth’s Nathan Ake.

The Holland international was part of the Cherries side that lost 5-2 at OLd Trafford last weekend and footage emerged after the game which appeared to indicate Solskjaer’s interest in him, suggesting he wants to sign a left-footed centre-back.

When that was put to Solskjaer, he said: “I’ve got seven centre-backs, so I don’t know where that’s come from. We’re fine.”