Home All The News Ole: Greenwood is ‘way ahead’ of his ability at 18 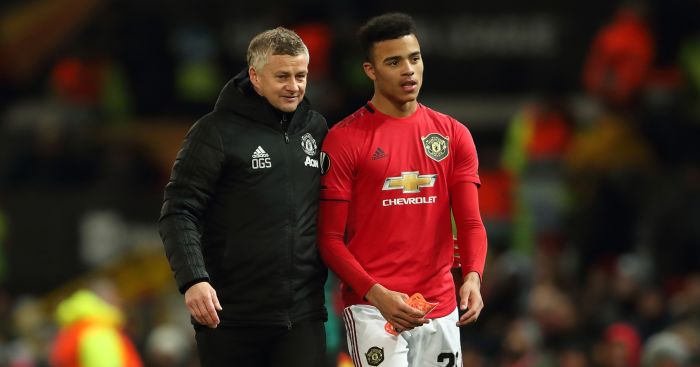 Man Utd boss Ole Gunnar Solskjaer says young striker Mason Greenwood is “way ahead” of his ability when he was 18.

The young striker opened the scoring for the Red Devils to set them on their way to a 3-0 win against Brighton on Tuesday, which saw them rise up to fifth in the table.

It was Greenwood’s sixth Premier League goal of the season for Man Utd and in a week which Solskjaer has demanded his frontmen score more goals, it will have done his chances of keeping his starting place no harm.

Solskjaer told reporters: “Mason’s way ahead of what I was at 18/19 that’s for sure, he’s got a knack of scoring goals. I don’t wanna say anything different, it’s natural for him and what I could do as well. A brilliant boy to work with, he keeps making better decisions.”

On their next five matches, Solskjaer added: “I’ve seen lots of quotes we have an easy run in but next five games: Bournemouth we lost against them earlier in the season, Aston Villa we drew at Old Trafford, Southampton, we drew to them, lost to Palace, lost to West Ham – there are teams we’ve got a point to prove against and we have to improve on last performance.

“It’s not an easy game, what anyone else thinks doesn’t matter, we’ll have to perform. Bournemouth are fighting, where they are is not a nice place to be in but they are one of the best teams in the league on set pieces. We know we have to stop quite a few things with them. If we play to our best we should create chances and win the game.”