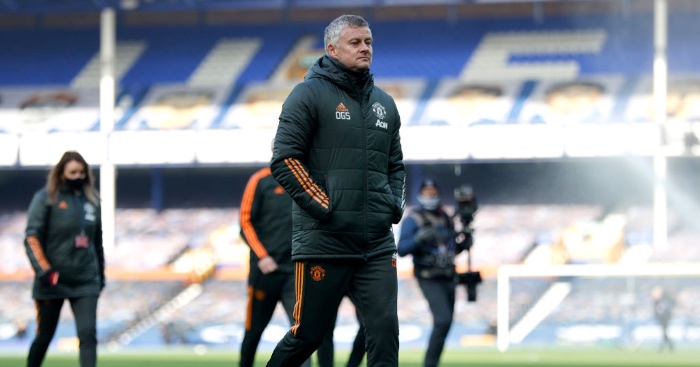 Man Utd boss Ole Gunnar Solskjaer was visibly angry after the win over Everton, calling their match schedule ‘a joke’.

The Red Devils went behind in the 19th-minute as Brazilian winger Bernard put Everton in front.

The playmaker found space in the opposition box between Michael Keane and Mason Holgate.

He dispatched of a cross from Luke Shaw with a brilliant header in the 25th-minute.

Fernandes was at it again soon after to put the away side in the lead.

He floated in a cross for Marcus Rashford, which the Englishman seemed to miss. The ball then hit the post and went into the net.

Fernandes continued his effective streak by setting up Edinson Cavani for his first Premier League goal.

Cavani smoothly finished the chance in the 95th-minute to guarantee Solskjaer’s side all three points.

Despite the big victory, the Norwegian boss was visibly angry after the match.

Speaking to reporters, Solskjaer said: “We were set up to fail. The kick-off time set us up to fail. We have been to Turkey, played loads of games this season already, we got back Thursday morning and we are playing Saturday lunchtime, it’s an absolute shambles.

“These boys deserve better. Luke Shaw has got injured because of it. It’s a hamstring which might be a long one and Marcus Rashford might be struggling.

“The authorities set us up for fail, who is responsible? We’ve had enough of that. Players this season, in these times, a pandemic, mentally and physically it’s draining. Let us play on a Sunday, there’s an international break after this, it’s a joke.

“The players were brilliant. Cavani is getting better and better.”

United’s next match is against West Brom on Sunday 21st November.