Home All The News Solskjaer: Man Utd are ‘seeing the best’ of match-winner Pogba 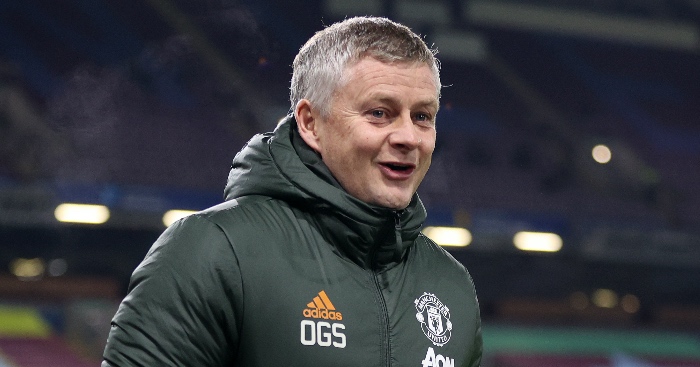 Man Utd boss Ole Gunnar Solskjaer believes he is ‘seeing the best’ of Paul Pogba at the moment, as the midfielder scored the winning goal in their 1-0 victory over Burnley.

The first half saw plenty of VAR involvement as Harry Maguire’s goal was ruled out for a foul.

Luke Shaw and Robbie Brady were also investigated for potential red card challenges, although both were allowed to play on.

The breakthrough eventually came in the 71st-minute. As expected, Bruno Fernandes was involved. The playmaker sent Marcus Rashford off down the wing, who then crossed it over to Pogba.

The Frenchman hit a great first time volley from the edge of the box. It was deflected by Matthew Lowton and went past keeper Nick Pope.

Despite having some good chances late in the game, Burnley rarely managed to trouble David De Gea.

The victory means United are now top of the Premier League table, ahead of rivals Liverpool.

Speaking to reporters after the win, Solskjaer said: “When you get three points in the Premier League it makes you smile. It was a hard-fought three points, it always is up here.”

Speaking about the VAR decisions, he continued: “I’ve not watched any of the decisions so I can’t really say. It might’ve been a foul by Luke [Shaw] apparently so that’s probably the right decision, but definitely not a foul by Harry [Maguire] for his goal.

“If you can’t jump and head it in like this, I don’t believe that’s anywhere near a foul. I’m delighted with the response after a bit of a tough first half hour.”

Pogba’s effort was his third goal of the season for the Red Devils. When asked about him, Solskjaer said: “I’ve always said Paul [Pogba] is a big player for us, he’s a good character in the dressing room, he’s someone the lads look to, he’s a world champion.

“We’re seeing the best of Paul at the moment – he’s been injured and he’s had Covid so it’s natural to need to get back to fitness after that.”

They will now prepare for a huge match this weekend against Jurgen Klopp’s Liverpool. The fixture could go on to decide who wins the league.

Speaking about the match, Solskjaer said: “Of course we know we’re going to the champions, they’ve had an unbelievable three seasons so we’re ready for it.

“But we’re ready and we’re excited, we’re hungry for it and it’s a test of character and quality again. We’re in a good position going into it.”