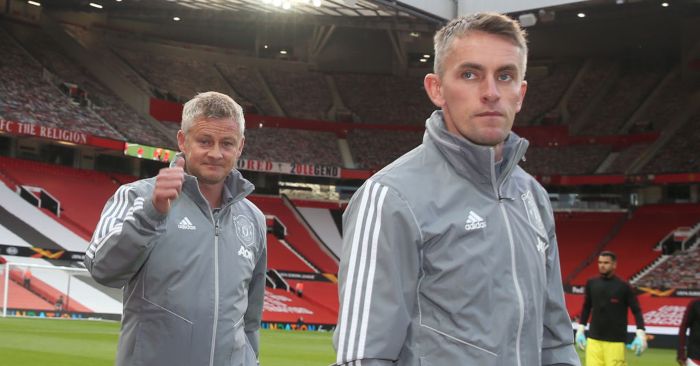 Manchester United secured their place in a Europa League quarter-final with Copenhagen after a 7-1 aggregate victory over their Austrian opponents.

Jesse Lingard and Anthony Martial scored at Old Trafford but it was the late introduction of Mengi that caught much of the attention.

The 18-year-old replaced Timothy Fosu-Mensah in the closing stages as he became the eighth Manchester United academy graduate to be given a debut by Solskjaer this season.

The manager praised the youngster after the game.

“He is a leader, a centre-back, someone we believe in,” he told BT Sport. “He’s strong, quick, good on the ball and I think we’ve got a decent player there.

“He’s in the age group of Mason so they grew up together.

“We learned the players need to play to keep that sharpness. Some of these lads haven’t played for a while and it showed.

“We won, we gave a debut to a young lad, it’s been a good night.

“It is that sharpness you lack when you don’t play regularly. Some haven’t played since lockdown.

“For me it was a good exercise, it’s job done, minutes under the belt and on to Copenhagen.”

What a feeling☺️, proud moment for me and my family tonight to make my debut for @manchesterunited at old Trafford, Big thank you to everyone for the support. Time to kick on 🚀 pic.twitter.com/FtUSQpOKyR

“I can confirm that,” he said. “Alexis has had a good time over there, he’s a good player and we wish him all the best.”