"But (it's a) strong, fit 25-man outfield squad and it was a good session as well. We're looking stronger." 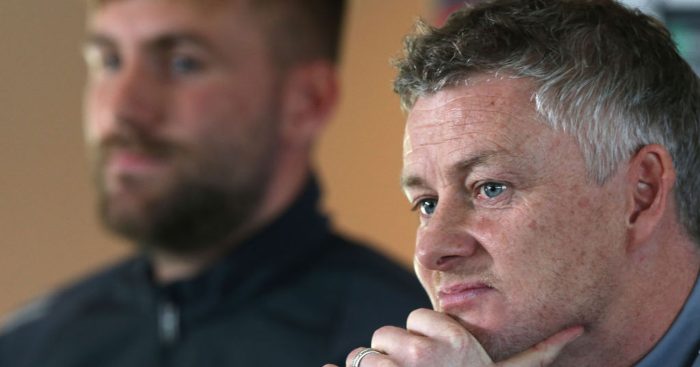 Axel Tuenzebe and Scott McTominay were among those training at the Aon Training Complex on Wednesday morning.

Marcus Rashford and Paul Pogba, out with back and ankle issues respectively, did not train with Ole Gunnar Solskjaer‘s 27-man squad.

“We had a couple of knocks in training but hopefully they’ll be OK,” Solskjaer said of his squad for Thursday’s match.

“But (it’s a) strong, fit 25-man outfield squad and it was a good session as well. We’re looking stronger.”

Asked how the rehabilitation of Tuanzebe and Fosu-Mensah is going, the Man Utd boss said: “They are getting close to either a reserve match or behind-closed-doors match.

“We need them obviously to play in that kind of game before we use them in a first-team appearance.”

Neither player will feature against Club Brugge in the Europa League on Thursday, when United will look to build on last week’s 1-1 draw in Belgium and make the round of 16.

The competition may give United their best route back to the Champions League, given the fifth-placed side are in a tough battle to qualify through the Premier League.

Missing out will make it harder for United to attract summer reinforcements, while the financial impact was laid bare in Tuesday’s fiscal 2020 second-quarter results.

“We’re a big club, we’ve got good finances,” Solskjaer said. “But of course the longer you’re out the more you suffer, so of course it’s an ambition for us to get back into the Champions League, both for the footballing reasons and financially that will help the club.

Luke Shaw joined Solskjaer at the pre-match press conference and spoke of his desire to play in a final – at last – for United.

Injured for the 2016 FA Cup final, Jose Mourinho then overlooked the left-back for the squad that won the EFL Cup final the following year.

A foot injury meant Shaw watched the 2018 Europa League victory from the sidelines and he missed out on the squad for the 2018 FA Cup final, heightening his desire to help United to silverware.

“It is a massive ambition for me,” he said. “I was there for the Europa League final and the feeling, even though I wasn’t on the pitch, was a feeling I have not felt and I wanted more of.

“I wasn’t involved and that is what is pushing me on even more to get into this final, and others. We should be in finals and we should be in all competitions until the end. We are very confident at the moment.”