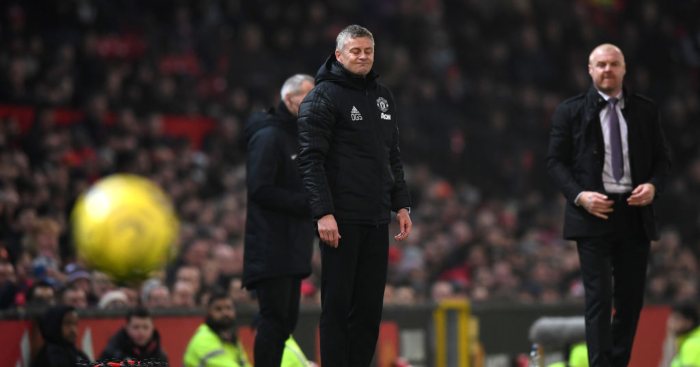 Ole Gunnar Solskjaer says Manchester United will “hold our hands up” and accept their display in a 2-0 loss at home to Burnley “wasn’t good enough”.

United began the night 30 points behind Premier League leaders Liverpool following their defeat at Anfield on Sunday and the home fans loudly voiced their displeasure as the Red Devils suffered another demoralising loss.

Burnley took the lead six minutes before half-time as Ben Mee jumped highest in the area to nod the ball down for Chris Wood to apply a first-time finish.

And the visitors doubled their lead in stunning fashion in the second period as Jay Rodriguez rifled a ferocious strike off the underside of the bar from just inside the area, with Man Utd keeper David De Gea comfortably beaten at his near post.

Solskjaer told BT Sport: “We have got to hold our hands up and say it wasn’t good enough.

“In the first half we created some half openings but we were not sharp enough to take our chances. They were clinical and efficient and defended well. We couldn’t open them up.

“The boys have given everything they have got but they are experiencing this period for the first time in their lives. When you are at Manchester United you are playing at the biggest and best club in the world. Some of them have played 10, 12, 15 games and it’s not easy for them.

“I’m going to back them and help them get through this. We can’t do anything but hold our hands up and say it’s not good enough.

“You can talk about it all day long and we are disappointed with our points tally. We work every single day for these boys to improve and perform better than this.”