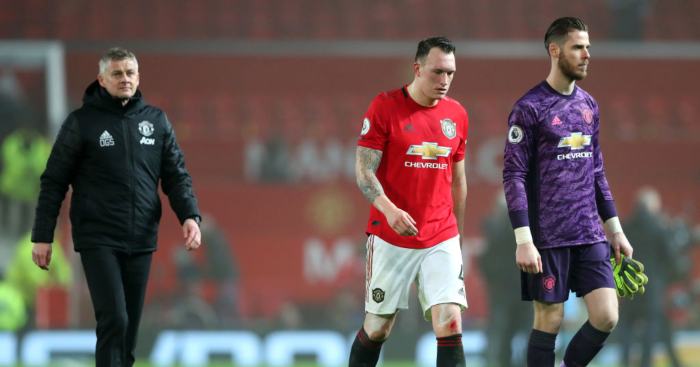 There are only really two articles to be written about Manchester United at the moment. The first is just a directionless howl about their inadequacies, taking aim at everything the club fails to do even remotely well. The second celebrates minor, moral victories, like only losing 2-0 to Liverpool or the encouraging, but isolated performance of an academy prospect.

So the tone is either damning or patronising, with rarely anything in between.

The 0-2 defeat to Burnley on Wednesday night was dismal. It came with no mitigation and no positives, but United exhausted everyone’s vocabulary a long time ago and these kind of losses have no new descriptions. They were static and laboured, porous and uninspired; everything they always are on nights like this.

A different angle, then: what’s the aim here? Instead of just bouncing along with the season’s narrative, throwing around harsh words when United lose and vaguely positive ones when they don’t, it’s more productive to ask what this joyless struggle is actually in aid of.

What is the best possible outcome?

If, for instance, the possibility of sacking Ole Gunnar Solskjaer was removed from the equation, if he had some sort of iron clad contract which prevented that from happening, then where do United think they would be in five years’ time?

Not where do they hope to be, by crossing their fingers and writing cheque after cheque, but what – on the basis of all the indicators this season and last – is their most likely scenario?

They’d be exactly where they are now. Everyone knows that; it’s an unavoidable conclusion. They’d be playing in the same way, they’d be conceding the same goals and meandering into the same attacking cul de sacs.

There are no ideas in this team. There’s nothing about them which is obviously worth persevering with. If there was a vague spark in attack or some semblance of chemistry in midfield then, maybe, there would be an excuse to play dumb and carry on.

But the performances are only growing more lifeless. The negativity is also becoming so pervasive that even the new players have been contaminated, even those who were supposed to be part of the recovery.

Harry Maguire appears leaden footed and clumsy, with Chris Wood and Jay Rodriguez proving too sharp for him on Wednesday night. Wood is a good player having an excellent week, but – really – a £80m centre-half shouldn’t be vulnerable to a simple flick on. He’s an obelisk, a battering ram, a big block of iron. But he was still too nimble.

Aaron Wan-Bissaka actually seems shocked by what he’s found at his new club. He doesn’t look like £50m player, either. Nor does he look like the person in his unveiling photo anymore. That smile disappeared a long time ago, wiped away by the realisation that he hasn’t really signed for Manchester United after all.

So there are signs of decay everywhere. These are assets turning bad. The only players exhibiting life are the ones who, most likely, would do so with or without Solskjaer. Mason Greenwood is clearly very talented, but his future doesn’t need the Norwegian’s rhetoric. Brandon Williams is a very capable, too, but his place in the team seems assured by the club’s useless recruitment.

What, then, are the reasons for continuing this awful drift? If something is to be endured, then it has to be with a purpose. But Solskjaer’s United aren’t walking determinedly through the rain towards something, they’re just standing in the drizzle, getting wet and ever more miserable by the hour.

Again, then, what’s the point?

He’s a nice man and he’s not entirely responsible for this situation. It’s possible to believe that, though, but still understand that this has gone on for far too long already. The Glazers family and Ed Woodward are the problem, yes, but Ole Gunnar Solskjaer has never been any sort of solution.