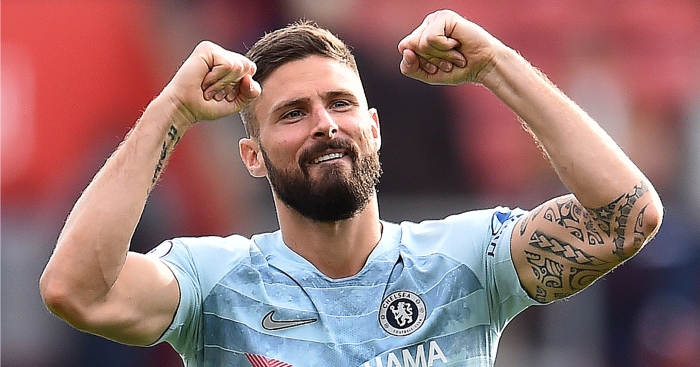 In April, when he was chasing down Mohamed Salah for the Premier League’s Golden Boot award, Harry Kane was asked what drove him forward in that pursuit. “Your job as a striker is to score goals,” Kane told Sky Sports. “I know I do other stuff like hold the ball up, try and bring other people into play and work hard, but my job is to score goals.”

Kane’s view is not outlandish. We have awards for strikers at every major tournament and in every domestic league according to the number of goals they score, and the number of goals scored is typically used to compare and contrast forwards. In that environment, of course scoring goals is prioritised. Speak to any young child who plays up front for their local team, and it is the goals they will excitedly tell you about. Goals are not the sole barometer of a striker’s quality, but they hold the most sway. Goals, goals, goals.

Olivier Giroud’s last club goal was on May 6. Since then, he has played 11 Chelsea matches without scoring. Take the long-term view: Giroud has seven goals in his last 37 Premier League games, stretching back to May 2016.

Last month, Giroud scored for France against Netherlands in the UEFA Nations League to end a run of ten international games without a goal. During his 546 minutes at the 2018 World Cup, Giroud did not score. There were 247 players who had at least one shot on target during that tournament. Astonishingly, the starting centre forward for the victors was not one.

By any normal standards, this would be a disaster. There would be calls for Giroud to be left out of the starting XI for club and country, his ability questioned. After all, Giroud is no stranger to a goal drought. In May 2016, he eventually ended a 15-match dry spell at Arsenal and 18 months later was sold by the club. That Giroud was allowed to join a top-four rival for a relatively modest fee suggests that Arsenal had lost patience with his goalscoring record.

But here’s the thing: As Giroud’s goalless run has continued over the last six months, his importance for club and country has increased. Not only has he lost just one of the last 29 matches he has played for Chelsea and France, but Giroud has actually improved both teams. He is an almost unique entity at the highest level: the successful non-scoring striker.

Under Maurizio Sarri, Giroud has been given an elixir. With Eden Hazard told that he should stay in the final third rather than helping out defensively, the Belgian is able to spend far more time closer to goal and thus closer to his centre forward. In those circumstances – and given Hazard’s form – Sarri does not need a striker who concentrates mostly on scoring goals. He needs a facilitator.

Our typical expectations have been turned upside down: a centre forward plays the supporting role for a wide forward. Hazard has taken shots at a quicker rate than Giroud this season. Giroud virtually matches Hazard – one of the most creative players in the country – for rate of chance creation. Of all centre forwards to play 300 minutes in the Premier League this season, none create chances as regularly as Giroud. He is responsible for protecting the ball, dropping deep, making runs, creating space, dragging away defenders, creating chances and taking shots; almost in that order.

In fact, Sarri is merely copying Les Bleus-print from this summer’s World Cup. Having started Antoine Griezmann, Kylian Mbappe and Ousmane Dembele in their first game against Australia and struggled to break down the opposition, Didier Deschamps started Giroud in every subsequent match and France won the competition. With Blaise Matuidi, N’Golo Kante and Paul Pogba behind Griezmann, Mbappe and Giroud, Sarri had evidence of how his own front three could work. Hazard might nominally start on the left, but this season his role has become more similar to Griezmann’s for France. Why wouldn’t you do what it takes to get the best out of your most dangerous attacking players?

He may not have had a shot on target in Russia, but Griezmann and Mbappe were both highly complimentary about Giroud’s role in their success. Griezmann spoke of the “total freedom” that Giroud’s work affords him, while Mbappe went even further: “He may not be the most spectacularly but he is very effective and very important for us. He does the dirty work for us.”

At club level, Hazard is just as enthused. Last month he described Giroud as the best target man striker in world football. It was an extraordinary compliment to pay, but also fully understandable. For all the compliments Hazard is rightly receiving for his individual brilliance this season, football is a team sport. If Giroud doesn’t do his thing, Hazard cannot do his.

“When you are a striker like me, you always play for the teammates,” Giroud said when questioned about his lack of goals during the tournament. “If I can make space for the others, I always try to choose the best option for the team. When France were world champions in 1998 I think Dugarry scored one goal and Guivarc’h not at all. If we are world champions without me scoring, I don’t mind.” That might sound an obvious thing to say, but it demonstrates great selflessness in a climate where strikers are often judged on their goal totals.

That is not to say that Chelsea would not like Giroud to score more goals. Only two players in the Premier League have taken more shots without scoring this season. Missing chances will never be given a positive spin. But they are not reliant upon it.

Therein lies the reason for Arsenal selling Giroud in January – they were reliant. In a different system without a Hazard or Griezmann-type, Arsenal needed Giroud to be something else, perhaps something he wasn’t and will never be. They may have found it in Pierre-Emerick Aubameyang and Alexandre Lacazette in tandem.

But Arsenal’s gain is Chelsea’s gain too; this is a move after which every party is now content. At the age of 31, Giroud is enjoying life and the trust of his club and international managers like never before. From under the weather or over the hill to top of the world, Giroud is current proof that a striker can be both selfless and successful. It just takes the right supporting actors.