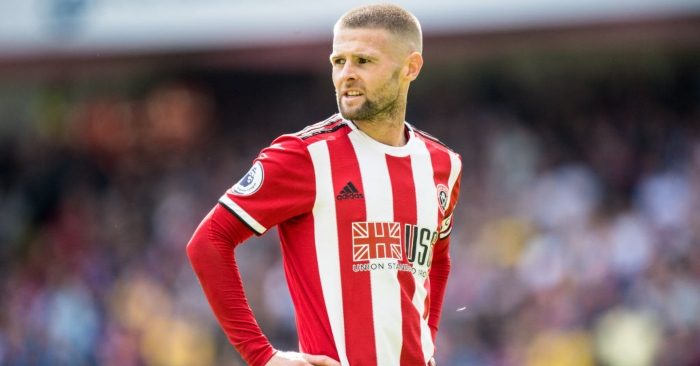 Sheffield United have a set-piece built into their open-play routines. They’ll work possession around the penalty box, shuffle their forwards into position, and then lay the ball back into a shallow right area, from where Oliver Norwood will deliver a whipped cross towards the back post.

It hasn’t actually led to a Premier League goal yet, but it’s only a matter of time. Norwood is really good from set-pieces – corners and free-kicks – but he has that particular ball too. Opponents seem wise to it; it appeared on United’s highlights a lot last season and they know the importance of shutting it down, but eventually it will catch someone out.

It has to, because it comes from nowhere. Norwood doesn’t need a steadying touch to deliver it, he just plays it first time. The cross knifes into the box from nowhere and, if the runs are timed correctly and the ball arrives where it should, it can’t really be defended. Credit for the design presumably goes to Chris Wilder and Alan Knill, but coaches are only able to create around their resources – and Norwood is quite the component.

His story is fairly well known. He was the player destined never to quite get to the Premier League. Brighton decided to loan him out when they were promoted. When Fulham went up after them, they opted not to make his loan from the AMEX permanent. On the basis that his place in their team went to – among others – Jean Michel Seri and Frank Zambo Anguissa, that’s probably a decision they’d like to have back.

Watching him play now, he looks like someone who should never have been anywhere other than in the top flight. He’s not a physical specimen. He doesn’t charge up the pitch and back, skittling opponents as he goes. Nor is his game punctuated with gratuitous rabonas and needless roulettes; he doesn’t carry a bag of tricks with him.

And yet he’s still aesthetically so alluring.

Actually, all three members of that midfield have deeper layers. John Lundstram is a far better long-range passer than assumed and John Fleck is the kind of nuggety box-to-box type who, if he was Spanish instead of Scottish and five years younger, would cost in excess of £20m. He’s excellent and incredibly versatile.

Norwood isn’t the best player among them. In fact, from a breadth-of-abilities standpoint he’s definitely not. But he’s the most watchable. Lundstram is a very rounded player, but he makes the game look like hard work. As does Fleck, with his little face like a big fist. But Norwood has a more simple grace. He’s more measured and static; he’s calmer.

Watching him makes you think about how, in spite of the way football has changed, certain traits have never gone out of fashion. If you can trap a ball, get your head up and then pass it well, you can just about have a career in game. The caveat being that you need the right opportunity.

I remember when Leon Britton first appeared in the Premier League with Swansea. He’d played for the club in every division by that point, but his profile really didn’t suit that kind of CV. He was delicate instead of rugged. He was all touch and technique instead of studs and elbows. He certainly didn’t look like someone who could withstand the attrition of that experience, even less one who had been shaped and hardened by it.

But he was glorious to watch – a real asset to the division. But just think: he may have been a player who obviously belonged in the Premier League, but he would never have had that opportunity if it weren’t for his club’s unlikely rise. Norwood is in that realm too. He’s 28 years old. If United hadn’t reached this level under Wilder, would any club have signed him and pulled him up? On the basis of what had happened to him before, absolutely not.

How many more of him are there? It leaves you speculating in weird and wonderful directions, about the nature of talent and the margins which separate those who make it from those who aren’t so lucky. Is it just that? Are there dozens of other Ollie Norwoods in the Football League, all capable of providing just as much of a spectacle if only a coach would manage and nurture in the right way?

Norwood is a spectacle, too. I reported on Sheffield United’s first game of the season this year, down at Bournemouth where the pressbox is low and close. When the crowd is distracted and the ground is relatively quiet, you can hear players on the near touchline calling to one another.

That was Harry Arter berating Roger East for not giving him a free-kick in a game against Watford. You can hear all sorts of things – including, if you’re lucky, the sound of a player striking the ball.

In the second half of that game, with United chasing an equaliser, Norwood kept finding himself in that shallow right position. He would clip the ball. Whether he was pushing it in field, raking it across the pitch, or whipping towards that back post, it always made the same sound as it left the foot. Clip, clip, clip. Not the thud of a centre-half’s clearance but the clip of educated leather. It was a sharp noise, a pure and precise one.

Over time, as you grow more familiar with a player, you come to enjoy them in isolation. The privilege is in watching them trap and pass, not necessarily in altering the game. With him, for instance, that joy is in the cut diagonal he plays, the one which fades wickedly as it whistles across the pitch. Or simpler: a 15-yard carve with the outside of the boot, maybe a quick push through the lines.

It’s all the same. It’s not the goals and assists with a player like that, it’s the essence. You’d buy a ticket for a park bench if it meant you could spend the afternoon watching Ollie Norwood pass the ball.