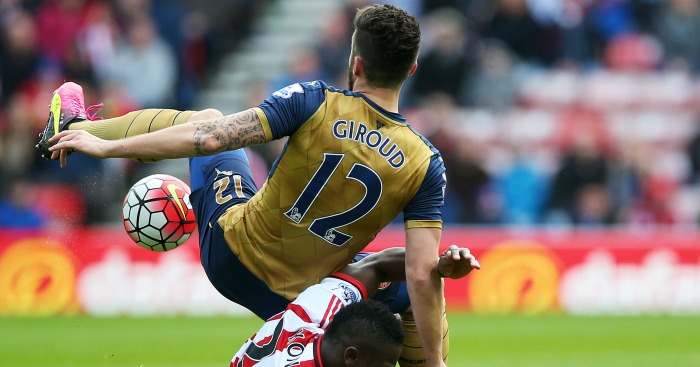 In the build-up to the trip to Sunderland, Arsene Wenger was forced to field questions over the future of Theo Walcott, rumoured with a move away from Arsenal this summer. “I don’t know,” was Wenger’s response. “You bloody better do,” was the instant reaction of most Arsenal supporters.

Although Walcott has redefined the idiom ‘flattering to deceive’ during his decade at the Emirates, the forward must wonder quite what he’s done to be singled out. Since mid-January, Walcott has played just 318 Premier League minutes, scoring twice. That’s two goals more than Olivier Giroud; the Frenchman has been given more than twice as much playing time.

If Walcott has been ‘meh’ to the point of extreme frustration, Giroud has been worse. The abiding image of Sunday’s 0-0 draw with Sunderland was the Frenchman beating the ground in frustration after another poor touch saw a chance wasted. It’s a familiar pose over the last three months. The good news is that Arsenal are one step closer to the end of this clusterf*ck season. The bad news is that they’re one step closer to the next one.

Giroud has now gone 14 Premier League games without a goal. When Arsenal needed their front-line striker to shovel coal to fuel their title challenge, the Frenchman went for cold water instead. While Arsenal typically responded with the pressure off and their opportunity missed this season, Giroud hasn’t even done that.

Against Sunderland, he reached a nadir. During the first half, Giroud touched the ball 25 times and lost possession on 11 occasions. Five different Arsenal players managed shots on target before the break, but Giroud was not one of them. He did set up a chance with a first-time touch to Alex Iwobi, but that should be the norm for a striker at a club with title ambitions. By the time he was removed after 70 minutes, offsides led shots on target by a scoreline of 3-0.

Arsenal’s lack of prolific goalscorer is not the sole reason for their dissatisfying season, but it comes close to the top of the list. Each of the other clubs in the top four have enjoyed the benefits of a reliable finisher, but Arsenal haven’t had that luxury. Harry Kane – 24; Sergio Aguero – 23; Jamie Vardy – 22; Olivier Giroud – 12. Even in minutes per goal terms, Giroud falls well short. His 174 minutes per goal compares unfavourably to Kane (125), Aguero (95), Vardy (134) and Daniel Sturridge (99).

You can add Jermain Defoe to that list too, in a struggling Sunderland team with far less service than that provided by Arsenal’s multitude of attacking midfielders. While Giroud laboured and lumbered, Defoe twice created chances out of nothing. The example set by lone striker really can filter down to the rest of the team.

As with the rest of the negativity around Arsenal, Wenger’s fingerprints can be found all over this crime scene. “I could not understand the frustration of the fans,” Wenger said on Boxing Day with Giroud in rich form. “Giroud has the ­confidence. I have said that many times. He has the mental stature to play in this position.” Can he understand that frustration now, I wonder? Or do we not talk about that now?

Giroud’s goal droughts are nothing new, for the striker has scored his goals in bursts throughout his time in England. “It is a bit cyclical always, especially for Giroud,” said Wenger last month. “Giroud has cycles so it was a weight off his shoulders. You know this season for example, he has had games where he has gone boom, boom, boom, boom, boom and after he had a little spell where he didn’t score. Now I hope he has a repetition of his former spell and starts to score again.”

Unfortunately for Wenger and Arsenal, by March was already too late. After four seasons of keeping the faith with Giroud’s “booms”, the focus is still on the extended periods of silence in between. Having considered him as Arsenal’s Mr Just Not Quite for the last three years, Giroud has promptly taken a significant step backwards. He’s now their Mr Never Will Be.