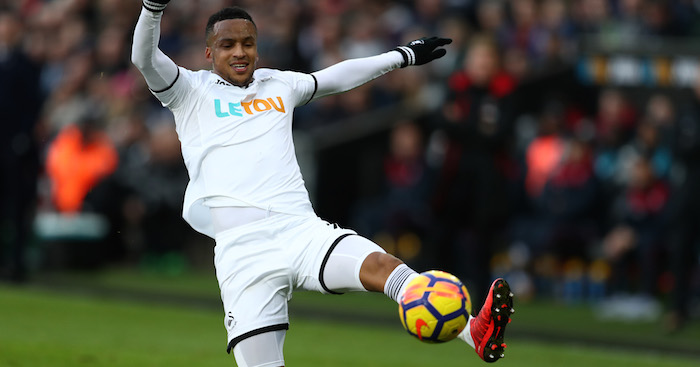 The 2-1 loss coupled with Crystal Palace’s draw against West Brom saw Paul Clement’s men sink to the foot of the table for the first time this season.

Swansea have taken just one point from their last seven matches and no team in the top flight has scored fewer goals.

Things began well when Wilfried Bony netted his first goal since returning to the club in only the third minute but Xherdan Shaqiri and Mame Diouf put Stoke ahead before half-time.

The result ramped up the pressure on Clement but Olsson insists the players are to blame and has told his team-mates to dig in.

The left-back said: “We came here, we wanted to play more aggressive going forward. We did that the first 20 minutes but then we didn’t do the basics.

“The manager told us what to do. We need to listen to him. We knew there was going to be a long ball in and we had to deal with it, and of course the first goal the ball was given away.

“Simple, silly mistakes. It’s frustrating. I don’t want to keep saying it over and over again.

“When we conceded the first goal, most of the heads go down and we’re not playing as aggressive. It cannot happen. We need to be stronger mentally, much stronger, because it’s going to be a long season.”

Emotions spilled over after the match in the Swansea dressing room, although Olsson insisted that was a positive development.

“Today was one of those days where some frustration came out in the dressing room,” he said.

“Of course it gets a bit heated but in a good way. We all need to wake up as a team and we need to run for each other, create chances, offensively, defensively, like the end of last season.

“But we’re a team, we stand behind each other.”

The turning point came in the 36th minute when, having offered little threat, Stoke caught Leroy Fer on the ball 25 yards out and Joe Allen nipped in to set up Shaqiri.

Allen played for Swansea for 12 years from the age of nine until he joined Liverpool in 2012 and the Swans have failed in bids to re-sign the midfielder the last two summers.

The 27-year-old admitted it is hard to see his boyhood club struggling but is hopeful they can turn their season around.

“Yes it is (hard),” he said. “It’s early days and it’s not all doom and gloom. Being the opposition playing against them, they’re not a bad team, not at all. They’ve got to stick at it and, as a fan now, I’m hoping they do just that.

“They’re my team. Obviously I play for Stoke and my focus is on performing for Stoke but, like any football fan, I keep an eye out for the results and see how they’re getting on. I don’t think that will ever change.”