Home Watford On Graham Taylor, one of the true good guys 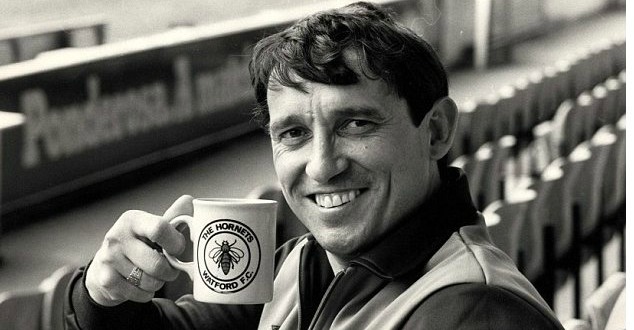 This piece was originally published in 2015, but lost to the ether as our archiving system got badly borked. It is a wonderful tribute to a lovely man…

Here’s a piece of free advice; don’t become England manager. Granted, that little piece of sage wisdom will not apply to most of you, but it’s worth keeping in mind in case something improbable happens, or if you are a professional football manager. You might think you can do a decent job, but it will almost certainly not be decent enough.

For the England gig makes monkeys of the best men. Or, shall we say, it makes perceived monkeys of the best men. Bobby Robson was so sick of the way he was treated in the press that he binned it off before Italia 90, a successful tournament that if Bobby wasn’t such a lovely bloke, you would think was just one colossal ‘fuck you’ to the men from the papers. Steve McClaren became defined by an entirely sensible item of weather protection, Sven Goran Eriksson by Little Sven and Glenn Hoddle by some reprehensible views about karma and so forth. Even Fabio Capello, iron man of European football, couldn’t be arsed by the whole thing in the end. It is, as the old documentary said, an impossible job.

The subject of said documentary is probably the worst example of the whole thing. Graham Taylor was, as you’ll remember, reduced to a root vegetable on the front of the Sun after some admittedly abysmal showings in the World Cup qualifiers, his reaction to which was unfortunately captured on film for future generations to laugh at.

And, in fairness, watching a man who resembled a minor local councillor sidle up to a linesman to say “Tell your pal he’s just cost me my job” was, on some levels, quite funny. The problem is that this sort of thing has a habit of taking over the common image of person, to throw their previous achievements onto a bonfire like it’s some sort of schadenfreudean rewriting of history.

Because Taylor was, before being gobbled up by this dignity mincer that was and still is the England job, a seriously brilliant manager. His gig before being called to Lancaster Gate (ask your parents) was with Aston Villa, who he took from the Second Division to damn near winning the league in three seasons, but it was at Watford that his true, lasting achievement was, erm, achieved.

Taylor took over at Vicarage Road in 1977 when the Hornets were in the Fourth Division, having turned down top flight West Brom basically because they were rude in the manner they approached him. He told Elton John, who had recently become chairman of his boyhood club, that if they were in the First Division within ten years, that would represent success. He managed it in five.

And, once there, they implausibly finished second in their first season, only behind Bob Paisley’s Liverpool, irritating all and sundry along the way with their rather direct style of play. The following years saw them reach the third round of the UEFA Cup, make the FA Cup final in 1984 and the semi-final a couple of years later.

Taylor found a club in a mess, who had been bottom of the entire Football League in the season before he arrived, had no training ground and had to share billing with a greyhound track that encircled the pitch, which he promptly got rid of. “It’s either the dogs or me,” he told John. In a decade he took them to Wembley, Europe and close to the league title, finally leaving them ninth in the top flight, some 66 places higher than when he arrived. You’ll not find many people in Watford whose memory of Taylor is “Do I not like that.”

As well as all this though, Taylor just seems like a lovely bloke. In Lionel Birnie’s wonderful book ‘Enjoy The Game’, about Watford in the 1980s, there are countless stories that paint a picture of a kind, generous and generally just sensationally pleasant human being.

One that stands out is the time the club’s clapped-out Fiat Panda, used by the scouts to travel the country, finally gave in because someone forgot to put oil in the engine. Taylor called a staff meeting, at which the four scouts assumed they would be given a bill for the repair of the car, so they pre-emptively decided to split the £1,000 cost. They were handed four envelopes, but instead of invoices they contained plane tickets and reservations for a swanky hotel in Portugal. “This is just a thank you from the club for all your work,” said Taylor. “Take a break, take your wives, and enjoy yourselves.” Taylor even offered to look after their children for the week while they went away.

And there are so many more. After one rather chastening defeat, Taylor trained his players hard with double sessions for three days, before arriving to the training ground on the Thursday. “I was talking to Rita (his wife) last night,” he said, “and she thought perhaps I was being a bit hard on you and I agreed. So, get yourselves changed into your tracksuits and meet me at the hotel for a Champagne breakfast on me.” He threw in some jugs of lager to lighten the mood, too.

On another occasion, instead of a pre-season training session he took his players for a walk with their dogs then a pub lunch. When Watford sold Luther Blissett to AC Milan (a deal which involved a bloke who owned a local Italian restaurant as a go-between) for a then-hefty £1million in 1983, Taylor hugged the forward who’d been with him from the start and tears were shed. Paul Atkinson, a midfielder signed from Oldham, chose Watford over Nottingham Forest partly because Taylor knew all about his game and spent a long time explaining how he’d fit into his side, whereas Brian Clough gave him a drink and said Forest were “going to the Reeperbahn on our pre-season trip. You’re not a poof lad, are you?”

We could go on, with any number of stories about his managerial skills and simple good eggery. But for now, before England play and we watch the latest poor whelp flail in the pitiless seas of the national job, just enjoy these, and remember that Taylor wasn’t a punchline, and he certainly wasn’t a turnip.