Home Chelsea On JT and his sickening sense of entitlement… 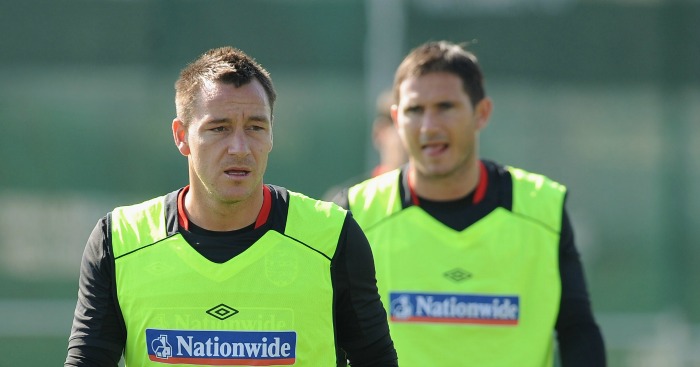 John Terry was talking on 5live this weekend. What he had to say about ex-players becoming managers and coaches had a typically old-fashioned British flavour.

“I feel it’s very important we get the best players back in the game.”

Hold it right there big JT. A question needs to be asked. And that question is “why?”.

The vast majority of top managers were never the best players; in fact, the majority of managers at any level were not. There is no correlation between being a ‘best’ player and being a good coach, or manager, even though strands of the ex-player community seem to default to that notion.

This isn’t to say some ex-internationals cannot make great managers, as Antonio Conte and Mauricio Pochettino are proving, but that isn’t necessarily because they were excellent players, it’s because they’re good at coaching, and coaching and playing are two different skill sets.

It’s not important at all that “we get the best players back in the game”, it is important that we encourage, train and develop coaches and managers with talent and enthusiasm. Their playing career is largely irrelevant. If it wasn’t, you would not have the likes of Arsene Wenger, Jose Mourinho, Jurgen Klopp et al at the peak of the profession.

But Terry wasn’t done with in-depth analysis quite yet. He went on to say: “This generation of footballers have earned very good money throughout their time, and we need to make it easier for them to get into coaching roles – by not doing the full length of the FA coaching course.”

Why Terry has conflated how much they’ve earned with being fast-tracked into coaching roles is uncertain, except to inadvertently suggest that when you’ve several million in the bank you can’t be bothered to put all the graft in that those poor saps who were not “the best players” have had to put into being qualified to get a job. Nothing must get in the way of top, top players getting top, top jobs. Why does it have to be ‘easier’ for them?

It suggests a degree of unthinking, default entitlement. How good you were at playing football does not and should not allow you to do shorter coaching courses and have anything easier. Terry seems to be suggesting that experience as a ‘best player’ should allow you to bypass what mere mortals have to endure. But what would be the point in anyone being less well-trained? Also, who makes the decision which ex-player was ‘best’ enough to get fast-tracked?

The Paul Merson and Phil Thompson attitude to Marco Silva’s appointment has now been thoroughly ripped to shreds by all and sundry, but their knee-jerk reactions to the appointment of an overseas coach at Hull City who had a rather good, if relatively short CV, is part of this same weird insular culture that feels disenfranchised
by the presence of better-qualified, harder-working, well-travelled, educated but non-British talent, yet also feel they shouldn’t have to do the hard yards in order to become a coach, just because they’ve played for their country or won trophies with their clubs. It’s a losers’ mentality.

When Steven Gerrard was rumoured to be going to MK Dons as manager, opinion was split between thinking it was a good place to start working on your managerial chops, and those who thought it was somehow beneath him. And last week Ray Wilkins perfectly summed this up when talking about Frank Lampard.

“Obviously people have to take badges now to get involved in coaching, but I just think someone should take a chance with Frank now. Put him back in the Premier League, and let’s see where Frank can go in the Premier League. A lot of people say you should do your apprenticeship down in the lower leagues and find out what management is all about, but not for me. Someone like Frank, that has worked with world-class players and played with world-class players for the last ten years, should be working with those type of players. He understands their mentality, he understands how to get the best out of them.”

Obviously, this stands no scrutiny. But behind this, behind the attitudes to the Silva appointment, and the Ian Cathro appointment at Hearts, and many others, is a whole cultural hierarchy which puts top English (or Scottish in Cathro’s case) star ex-players above everyone else.

No-one is saying that ex-international players shouldn’t be training to be coaches, managers, or transcendental gurus, if they wish, but they should surely start from the basis that their playing career doesn’t automatically put them ahead of people who have not played at all, or at a high level. This lack of, not just of a meritocracy, but of even the acceptance of the concept of meritocracy when it comes to players like Lampard going into management, holds our game back like little else.

It enshrines privilege and it denies opportunity to others who may be more talented, but less monied and well-connected – something which is economically and culturally systemic in England, leading to a hardening of social mobility and enshrining of wealth. In fairness to Lampard and Gerrard, they haven’t proffered this notion, it’s always done for them by the likes of Wilkins.

Also, if we’re talking about English ex-internationals going into coaching roles with youth team and reserves, we have a right to ask exactly what positive experiences any of them can pass on via their stellar England experience?

If the roles for these ex-players are going to be detailed tactical instruction, coupled with man-management and psychological motivation, they need to be well-educated in a lot of different aspects of the game. You don’t just have to put the cones out to get your badges, and thus to become a competent manager. Having played away at Elland Road on a wet Tuesday night might have its uses, but it won’t help you when one of them tricky foreigns what don’t know the league, Jeff, switches tactics mid-game and makes you look like an idiot. Just shouting “energy” and pointing with gusto isn’t good enough anymore.

After all, who is the last ex-England international who became at least a very good manager? Kevin Keegan and Bobby Robson? Certainly, since the end of the 20th century, it’s a desert. And there are so few, not because they’ve been denied the opportunity by having to complete a full coaching course, but for a far more prosaic reason.

They. Were. Not. Good. Enough.

So much so that Paul Ince was passed over last week as England U-21 manager for Aidy Boothroyd, a decidedly not ‘best’ lower-league footballer, and a man who hardly has a stellar managerial reputation, despite once performing
heroics at Watford. Still judged a better bet than a man who bled from a head wound for his country, though. And that tells you everything.

In normal life, we all know that being great at something doesn’t make you great at teaching that said thing, often quite the opposite. These reactionary elements in British football need to catch up with reality, or will continue to look fantastically, ludicrously and almost comically out of touch.