Home Everton News On Kelvin Mackenzie, The Sun and the state of play

*That* column is what happens when certain strands of the media are encouraged to be hateful for clicks. 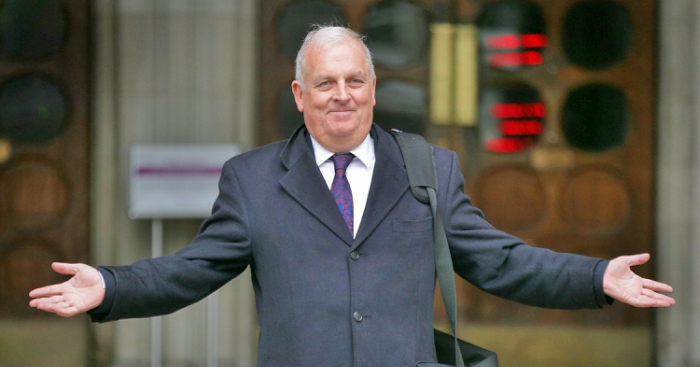 In this over-exposed, interconnected world of tears and fears, the tendency is to become some shade of unshockable, which is understandable, but dangerous, because desensitisation can be a facilitator for evil, and that’s just the way the bad people like it.

So in one regard, Kelvin Mackenzie’s blizzard of ignorance and insult directed at Ross Barkley, wasn’t shocking at all, because we’re all too painfully aware that his sulphurous flavour of vile idiocy exists and that there is a national newspaper which would unhesitatingly publish such an ill-conceived, almost psychotically hateful diatribe of abuse.

But it’s not just The Sun. Not just that crude, fading alpha male symbol of emotional repression on the dashboard of the white van of life. If only it was. There’s something disturbing and deeply wrong about the football culture of our national newspapers. Most of them, especially but not exclusively the tabloids, are downright strange and seem to exist on their own planet, in their own moral universe, speaking in tongues to an audience normalized to their flavour of weird.

To hear these paper’s editors, owners and some writers talk, you’d think these were organs filled with literary truth-seekers, yet they quite shamelessly distort and twist people’s. They claim exclusives which blatantly aren’t anything of the sort. I recall how a recent Arsene Wenger presser comment remark, clearly made in flippant jest, was reported as though serious. Whoever did that, journalist, sub or editor, had to know that was a total misrepresentation. But it didn’t matter. Truth is nothing. Space-filling is all.

Mediawatch documents a mere few examples of this every single week day. If you sit and read each of them, one after another, day after day, it very powerfully illustrates how this isn’t just a few misjudged articles, it is virtually the whole tabloid industry’s modus operandi. Those journalists who do have contacts and use them to write stories and pass on information must surely be as sick of this as anyone?

Thoughtful, simply expressed intelligence and perception, is completely outweighed by what is little short of cartoon nonsense, expressed via a uniquely dumb lexicon, the whiff of misogyny and racism always somewhere on the breeze, discernible but rarely provable. There’s the weird obsession with shortening names and filling half a page with a shoe-horned headline pun. Why is that their chosen mode of communication? Why can’t they stop using ‘The Special One’, ‘Roo’ or ‘Weng’ or any of their other ridiculous abbreviations? It’s nothing less than the infantilization of public discourse, and is for the benefit of no-one.

It is as though there’s an agenda to keep the masses poorly informed and hypnotised by the newspaper equivalent of dazzle ships. Stop thinking about things and look at this picture of a footballer going into a shop, or wearing glasses, or walking along a street.

Worse still, perhaps understandably in deep denial, some of the writers, when challenged, seem incredibly self-regarding about the nature of their profession, as if they’re all the highbrow equals of Hugh McIlvanney writing about the relationship between collectivist politics and football in northern mining communities, and not just desperately making sh*te up about Raheem Sterling’s spending habits. As though they don’t spend hours trawling through a player’s Twitter feed, desperately trying to try and frot up a story.

Most tabloid writers seem required to churn out vast oceans of this stuff, and it must be an absolutely exhausting, horrible job, one which you’d end up hating yourself for doing as you have another pop at a player’s taste in ‘bling’ via photos harvested from his girlfriend’s Instagram account. Or maybe it hollows you out, so that you feel and question nothing.

It no longer matters if any of it is decent, accurate or true. All that matters is that there is a limitless supply of it. That’s how it seems in some pieces you can nakedly see them trying to drum up something out of nothing, merely to fill the space. This was what Gary Neville was reaching to express earlier this season when invited onto Sunday Supplement. While he made a surprisingly watery defence on the day, when faced with some of the people responsible, the evidence is undeniable and vast.

And that, along with a blood-sodden hole where the still beating heart of morality has been torn out, is how we end up with Mackenzie’s projectile vomit of bilious and possibly illegal garbage, not just being written, but being published and being paid for, to the tune of a reported £300,000 per year.

It beggars belief, but in a culture which has largely stopped caring about the content of what is published, and now only cares about the volume, that’s how we end up in a moral vacuum where anything goes, no matter how pointlessly and witlessly abusive it is.

As a punter in 2017, it is almost impossible not to partly, accidently, or by force of need, end up supporting something with your money or labour that you don’t wholly agree with. Like when you buy an Innocent smoothie and find out it’s owned by Coca-Cola. But when it comes to newspapers, it’s simpler. Not buying The Sun and not visiting its website will not make anyone’s quality of life any worse.

Because I fear mental decay, my only exposure to tabloid culture is through Mediawatch and when I research a piece like this, and so I still get genuinely shocked by the low grade mush these organs are pushing out in such huge, ceaseless quantities. I’m not yet numb to it through over-exposure, so it still upsets and I am incredulous of its limitlessly dark grip on the nation. There is the occasional interesting piece, but you’d have to wade through to find it.

It seems to me that the tabloids have inculcated an amoral and stupid culture so successfully, over so long, that it has become an unquestioned norm, forever stealing another ounce of soul in return for another peek at another footballer’s wife in a bikini.

And that is this pathetic, vapid dead end life, until one day, nothing matters, no-one cares about anyone or anything, our humanity reduced to a sponsored meme on Facebook, our souls abandoned on a lost highway to hell. We should aim higher than this tabloid trough of despair, so let’s try to make commercial choices based, as far as possible, on empathy, love and inclusivity, not on alienation and cold hatred.