Home Home Page Front Page On VAR: Football should be poetry, not mathematics 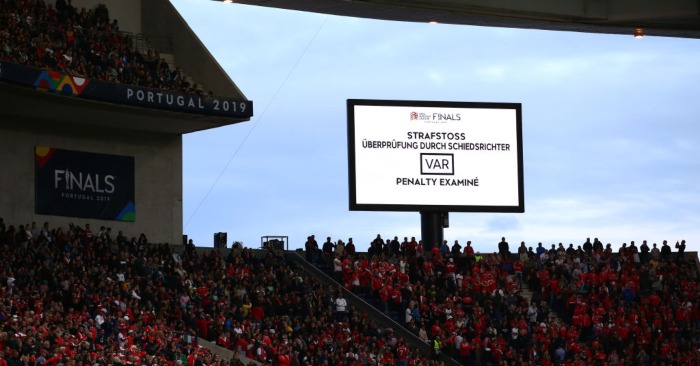 There was a lot of VAR action in the World Cup and Nations League this weekend. Many of us loathed it.

Is it because of the delays for decisions? Is it the coitus interruptus to goal celebrations that the VAR check makes inevitable? Is it the shard of ice to the heart every time you hear the commentator’s words “there’s a VAR check going on”? Is it the fact that it in most cases it resolves little and arguments about ‘unnatural’ positions of arms continue regardless? Is it the crushing of spontaneity? Is it the players standing in position waiting to kick off after a goal but unable to do so as the referee has been told they’re still checking for an offside, or for a foul in the first phase of the goal move? Is it the palpable disappointed restlessness that washes over the crowd while this happens? Is it the frozen frame with a line drawn on it to show a player’s toe was offside and thus the goal has to be ruled out even though said toe did not give the player any advantage at all and could not have been spotted with the naked eye? Or is it the fact that even when it isn’t used, it still infects every minute of every game, forever in the shadows, like a bully just waiting to pounce?

It might be some, all, or none of these that makes VAR unwelcome to so many of us, but for me, above and beyond all of these, it is the very principle behind VAR that is adrift from either sense or sensibility.

There are two sides in this; those of us who see sport as a beautiful undefined, all-embracing expression of our flawed humanity, and those who see those flaws as a bad thing which must be ironed out with technology

There is no compromising these two polar positions because they are not mere choices, they are expressions of who we are as people, each choice so tightly lashed into our sense of self that to defend it is to defend who you are as person. That’s why passions run high.

There are plenty of people I hugely respect who are very pro-VAR. I totally see their point. It seems as innately right to them to try and get decisions correct in this way, as it seems innately wrong to me. We cannot persuade each other of the justness of our stance because they are born out of something deep within ourselves.

Some suffer a cognitive dissonance with their brain telling them that getting the decision right is all important but their experience of this in reality robs away so much of what they loved about football.

However, I do note that sometimes opposition to my opposition to all replay technology in all sports is very patronising, often assuming it is a knee jerk luddite attitude in contrast to their own thrusting fashionable modernism. They tell me I wouldn’t be against it in very specific extreme circumstances, such as awarding England a goal to win the World Cup, but my opposition is total and hey, England could just as likely win the World Cup without VAR by being awarded a goal when the ball hasn’t actually cross the line.

The crucial thing to understand is that I and many others (of all ages) are simply philosophically against VAR, right? And we won’t be persuaded of its validity no matter how many different scenarios anyone likes to concoct to prove how good or successful it is.

Similarly important to understand is that I do not care if VAR gets every decision right or gets them all wrong. I don’t care if it remains ridiculously clunky and time-consuming or becomes seamlessly integrated. It’s not about that, as horrible as the process currently is, it is about the principle.

I simply do not want real-time sport paused to be inspected for mistakes. To me, that stops it being human and makes it more like a cold computer game, albeit a poor one where we’re forever waiting for the data to be processed by an overheating chip. The more we try to strip human failings out of sport, the less human it inevitably is. In other words I like imperfection and do not want technology to remove it.

The variables of human adequacy, by officials, every bit as much as by players, is the key to the unpredictability of sport and thus to the excitement. I wholly and totally accept that wrong decisions will be occasionally made. It does not bother me at all. It is not a flaw and I don’t want it fixed.

I’m also not sure that those who are so in love with the oft-repeated mantra of just ‘getting the decisions right’ understand fully what other evils have been released from opening this punishingly over-officious Pandora’s Box. Once you insist on VAR, you come up against a big problem: you cannot separate any moment in a football game from the last. It is an interrelated network of events each influenced and geared by the previous. So a wrongly awarded throw that leads to a goal 28 passes down the line is, in this authoritarian universe, an affront to fairness. Such a goal should be checked and disallowed, but right now it wouldn’t be. Yet VAR is nothing if it is not an absolutist religion. To restrict its use is to compromise the premise upon which its existence relies: the desire to get decisions right. So once you welcome VAR, how can you argue against the expansion of it? You can’t. It’s not a sustainable position to take because you’re going against your very own reasons for adopting VAR in the first place.

When a goal is ruled out for offside by VAR but another goal is allowed because the contravention of a law happened in a phase not checked by VAR, the game’s result is actually distorted more by the technology, not made more correct. It is, in effect, an inherently contradictory model unless it is used for all decisions wherever and whenever they happen on the pitch or in the game, just to make sure they are right because any mistakes at all will affect the game. It cannot be otherwise.

2018/19 season finally complete. Been a long one but ended the right way with a win, not the🥉medal we wanted but lots of positives to take from this campaign.. VAR isn’t one of them! 😅🤦🏽‍♂️ Have a good summer people and see you all next season! pic.twitter.com/5SlW6mJLjV

Once it comes into the Premier League you can be sure that managers will be quick to point out how limited use of VAR has produced an unfair outcome and that is why its use must be expanded. And they will be right. Once you buy into VAR that is the logical outcome. If you do not want that to be the case, you need to rethink your support for it now. If you’re pro-VAR, this is the horse you’ve chosen to ride and that is your destination.

Football has been the most popular sport in the country for 120 years without VAR, most games will still not have it and will still pull bigger attendances in totality than the Premier League. VAR has only happened as a consequence of the intolerance of TV audiences to accept mistakes will happen and the moaning managers with a desire to lay off the blame for defeat on someone other than themselves. And it is happening because of the ceaseless berating of officials by fans, players and pundits, at least in the men’s game.

I don’t believe that even the most pro-VAR person is having more fun because of its existence and fun is what football is about, remember? It is not about getting things right at all costs. Don’t give me the old ‘there’s so much money at stake…’ nonsense. This is sport, not accountancy. Sport is competition between humans, being officiated in the moment by other humans. All try and get things right in real time, but all accept they will never be perfect. That doesn’t ruin this or any other sport, rather that is the absolute intrinsic nature of it. To go against that is to go against being human and no good ever comes from such unnatural practices. If the game is worth any money, it is worth it because of the human fallibility at its core, not despite it. This is poetry, not mathematics.

If you’re already sick of this now, imagine what it’ll be like when there are several VAR decisions in every game in every ten-match round of the Premier League.

Next season the jackboot of camera lens absolutism will be on the public’s windpipe daring us to say it is wrong. But it is wrong. I hope those who wanted this will enjoy their top flight and international football more than they used to, but I doubt that any of us will.

And here’s the biggest irony of all, although VAR only exists because of television, when introduced into the Premier League, only a small percentage of the interested audience will be even be watching, because football on paywall TV simply isn’t that popular.

What on earth have we done to our beautiful game?