Home Mediawatch One defeat in ten but this Man Utd is worst since 1990? 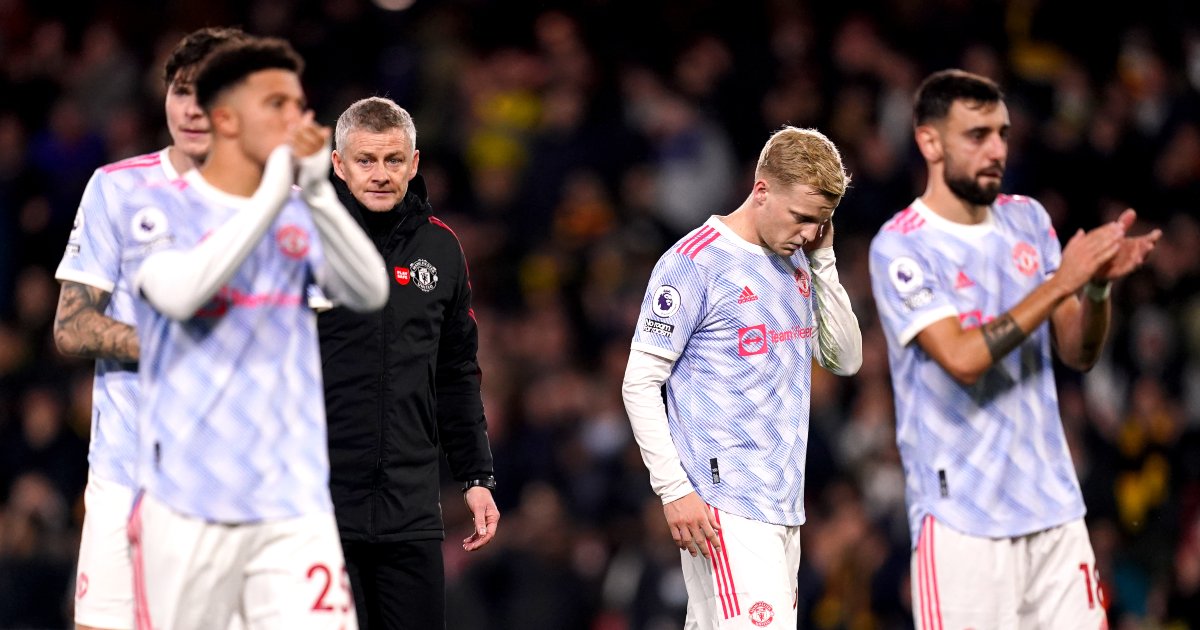 Manchester United won a game of football 1-0 to make it just one defeat in ten. They truly are in a mess of 1990 proportions.

This is (not) a low
Manchester United were truly terrible against Aston Villa on Monday night but they still won 1-0 and they have now lost just once in ten games since the sacking of Ole Gunnar Solskjaer.

‘The FA Cup might just prove Manchester United’s salvation once again – 32 years on.

‘This is probably the lowest point the club has been at since then.’

That’s Neil Custis in The Sun, keeping things in complete perspective about a team that has lost just once in ten games.

Off the top of our heads, we present in post-Fergie times:

But apart from those ten instances when things were undoubtedly worse for Manchester United, this is the lowest point for the club since Sir Alex Ferguson left in 2013. But probably not as we don’t have all day to do research. And we’re being generous in not counting the rare but undeniably real low points suffered under the great Scot in the previous 23 years.

We repeat: This Manchester United side is a bit shit. But they have lost just one of their last ten games. This is not ‘a season that threatens to end in mid-table mediocrity’ however much you try to spin in favour of a sacked manager responsible for at least six lower points over the last three years.

Drop it like it’s hot
Over on the Mirror website, there is no time to talk about actual football when you can pretend that other contentious things have happened at Old Trafford. The biggest was this:

Dropped? Dropped? The opening line literally says ‘Cristiano Ronaldo was left out of the Manchester United squad to face Aston Villa in the FA Cup due to a minor injury, Ralf Rangnick has confirmed’.

There’s clickbait and then there’s a bare-faced lie.

A ‘special moment’, is it? Let’s read the description in full:

‘As Gerrard made his way out of the tunnel and headed towards the away dugout before kick-off, the Stretford End erupted into a chorus of boos and jeers.

‘The Villa boss, clearly not phased, turned around and stared intensely in the direction of United’s raucous supporters.’

Think you might mean ‘fazed’. And we think you might have slightly exaggerated a ‘special moment’ which was basically a man looking towards a group of other people.

Yes, because there’s absolutely no difference between Neville’s words – “They’re a bunch of whinge-bags. Watch them on that pitch. I’ll not go into names, but they’re whinging at each other, arms up in the air complaining about everything” – and Shearer saying “when you look at the body language of some of those players…” before suggesting that Marcus Rashford has lost his confidence.

He ‘celebrated wildly’ when Manchester United scored. Sod all to do with any splits in the dressing room but why let that get in the way of a clickety-click headline?

In other news, Manchester United won a game of football. You might be forgiven for missing that fact amid the narratives.

Football Focus
On the back page of the Daily Mirror itself, we are told that ‘STEVEN GERRARD said a lengthy VAR delay sabotaged Aston Villa’s FA Cup hopes after his side were dumped out by Manchester United at Old Trafford’.

Did he f***. He literally said, “it’s not the reason we lost. We need to focus on other things, not just VAR going against us.”

If only the media could follow your excellent lead, Stevie.