Home Mediawatch One Liverpool star must be ’embarrassed’ after ‘greatest game’ 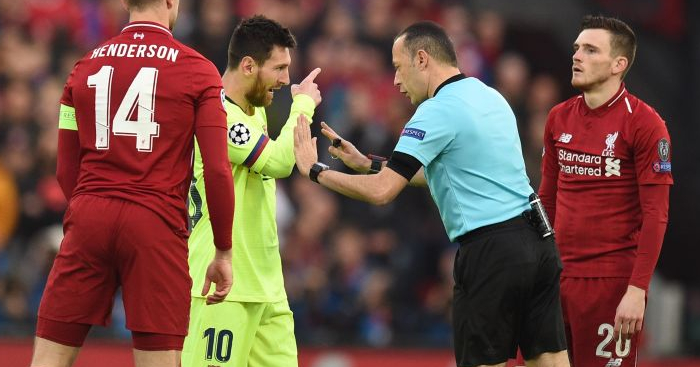 Oh, I, I got stamina
Dominic King (Daily Mail) calls it ‘the greatest comeback in the club’s history’.

Dave Kidd (The Sun) calls it ‘the most extraordinary win in the history of Liverpool Football Club’.

Paul Joyce (The Times) calls it ‘the greatest comeback in their fabled European history’.

Martin Lipton (The Sun) calls it ‘the greatest performance by an English side in Europe’.

But Neil ‘THIS was supposed to be Liverpool’s year‘ Ashton is not about to be upstaged.

You see, The Sun‘s chief football reporter was at Anfield to witness a remarkable comeback on Tuesday. It was ‘extraordinary’. It was ‘amazing’. It was ‘intoxicating’. It was really bloody good.

But that simply will not do when your only currency is hyperbole and you’re in a particularly frivolous mood. So we get this:

‘Liverpool barely had time to catch their breath before the reality started to sink in.

‘Whatever happens in the final against Ajax or Tottenham, they have just played their part in football’s greatest game.’

‘Whatever happens’. Even if the final is literally a better game.

Mail order
Martin Samuel of the Daily Mail also gets in on the act, claiming that Liverpool ‘gave this stadium arguably the greatest European night it has ever witnessed’.

Each to their own. Many might disagree but plenty would have preferred this game over any other, recency bias or not. Opinions and all that.

But Samuel is not content with that simple statement.

Hell, as Samuel himself says: ‘And Liverpool now are better than Liverpool then.’

Both were incredible, unthinkable achievements. So why do they have to be compared and ranked?

Ashton to Ashton
‘The confidence, the belief they can beat anybody in a big game, is slipping away’ – Neil Ashton, The Sun, February 20.

‘This victory, the manner of it, muscles in on Istanbul, when Liverpool recovered from 3-0 down in the 2005 Champions League final to beat AC Milan. They lifted the trophy that year and they are threatening to win it again. Anything is possible.

‘Their powers of resilience, their ability to drag themselves back from 3-0 down in the first leg, is legendary already. If they win it, these boys will be immortalised’ – Neil Ashton, The Sun, May 8.

Bust to bust
‘Last season’s finalists…are looking shaky and uncertain in the final stretch of the season’ – Neil Ashton, The Sun, February 20.

‘Finalists last season, Liverpool will believe they can go one step further after this riotous Anfield night’ – Neil Ashton, The Sun, May 8.

Cops and Robbos
It might have been ‘football’s greatest game’ (it wasn’t), but there was one moment that took away from the majesty and the magnitude of the occasion – one incident that soured a sweet evening and left a bitter taste.

Ashton was thankfully on hand to shed a light on the quite despicable, regrettable affair.

‘Andy Robertson will be embarrassed when he looks back on the moment he gave Lionel Messi a disrespectful off-the-ball shove on the back of his head. Can’t be doing that.’

He will definitely be ’embarrassed’ when he recalls something his own colleague, Dave Kidd, refers to as key to Klopp’s plan to ‘intimidate and rattle their illustrious visitors’.

So spare a thought for Andy Robertson. The ’embarrassment’ of helping his side reach a second consecutive Champions League final must be unbearable.

Poch on the bedpost
Quite why football is going to carry on despite the ‘greatest game’ ever having already been played is anyone’s guess. But Tottenham do face Ajax on Wednesday for that second place in the Champions League final.

Liverpool’s victory obviously and understandably dominates the newspaper coverage, but by the time they get round to remembering Tottenham are preparing for the biggest game in their modern history, do they bring us some tactical previews and thoughts on how they can overturn their recent poor form against such confident opponents?

Or do they scaremonger based on some pretty interesting quotes?

‘Mauricio Pochettino last night dropped a bombshell by admitting he could quit if Tottenham win the Champions League,’ writes John Cross of the Daily Mirror.

‘Mauricio Pochettino last night made the staggering claim that he would consider his future should Tottenham win the Champions League,’ says Sami Mokbel of the Daily Mail.

Then there’s Paul Jiggins of The Sun, who expresses his ‘fear’ that Pochettino ‘made the bold threat about his future because he knows what is in store for his flagging team’.

Either that or he answered a question about his future with unerring and refreshing honesty. Or was trying to motivate his players before a Champions League semi-final.

Imagine at the end of last season if you were told that Tottenham would win the Champions League having made no signings, moved stadiums mid-season, lost Harry Kane to injury and been beaten 13 times in the Premier League. It would be ‘staggering’ if Pochettino didn’t consider his future after such a ridiculous achievement.

It’s too late
‘He can get away with it… well done, Jurgen!’: Lineker refuses to apologise to BT Sport viewers after Klopp drops the F-word live on television AGAIN’

Well done to the MailOnline for trying to police two moments of genuine, unbridled and understandable emotion. AGAIN.

…because he ‘was held behind by anti-doping testers and made alternative arrangements to catch up with his team-mates’.

So they didn’t just ditch him there?

Recommended reading of the day
Jonathan Liew on Liverpool.